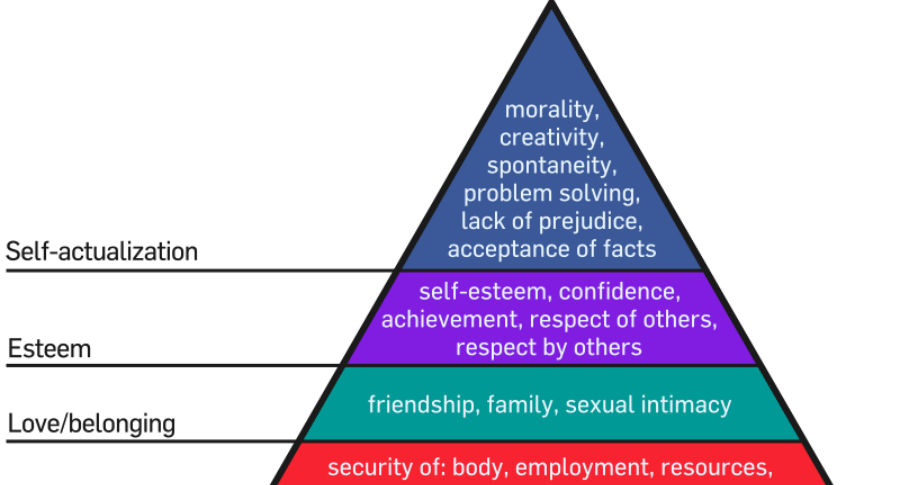 Reflections on Maslow’s hierarchy of needs

One of the most recognizable legacies of the humanistic psychology tradition is Maslow’s Hierarchy of Needs. Ask any manager or HR professional and they know it. Like many legacy theories, people see it as self-evident and generally would say that they agree with it.

It is one of the most useful and well-known achievements in the field of humanistic psychology that have been adopted by management. Stated simply, Maslow suggested that human needs can be placed into a graded hierarchy. If people are not able to satisfy a “lower” need, they will remain at that level and not ascend to “higher” level needs. The implication is that a workplace has to make sure that employees are able to satisfy lower needs to allow them to satisfy the higher and presumably more meaningful ones.

The wise man Stephen Colbert has coined the word “truthiness” to refer to an idea that makes so much sense that it must be true, even though it isn’t. I want to suggest that there are some elements of truthiness in the Maslow’s view, and that, while some elements of this model are useful, its universal adoption represents a triumph of truthiness over careful reflection.

When we look more closely at the hierarchy, several aspects emerge. It is a model of a neat system where we have a need; then it is satisfied and sort of goes away as another pops up for our focus. People are nice, orderly beings with on-off switches when their needs are satisfied, in a uniform and easy way. The example everyone uses to show the reasonableness of the hierarchy is that of course people can’t think about higher needs if they are starving or fear for their lives.

But wait. Do we reach a point where we have enough appreciation or friendship that we are satisfied, and then the switch goes on for other activities? Are artists all deeply satisfied in their lives, reaching for higher levels of meaning and truth? What about the tortured artist who uses art to deal with pain and loss?

What has happened with this model, and many other models that are cleverly suggested by researchers, is that the train stops right there. Here is a model. Maslow was a brilliant person. Therefore we can accept it and use it. And for 50 years, we have used the model with very little consideration of what it means or whether or not it describes something that really reflects reality. We like it because it is “truthy,” not because it is true.

Maslow was one of my mentors. I attended one of his courses, and he was a masterful teacher and engaging us all in questioning. He would laugh knowing we were still using his theory rather than asking what we can learn from it, and what it can and cannot do. His view, like that of real generative thinkers, is that a theory is like a pointer, showing us some connections we can make and leading to further reflection.

Maslow was trying to understand that nature of motivation, and how and why people were not simply pleasure-seeking animals who were sent to please themselves and do what feels good. He was concerned that the concept of the person as just interested in him or herself did not make room for altruism, for personal growth, and for the most important human achievements. He wanted to look at what made people want to do things that engaged their deepest and highest level of potential. His theory was (for him) a stepping-stone to look at questions, as he does continually in his book of field notes, republished recently as “Maslow on Management.” He meant the hierarchy to pose questions, not answer them.

Some later theorists, like Arnold Mitchell who applied this theory to consumer behavior and marketing, added to the model. Mitchell amended it into two paths that met at the top (his model was called a “tulip”) and suggested that people could take outer-directed and inner-directed pathways up the hierarchy. He gathered data from detailed values and marketing surveys to profile preferences according to the level of need. What he found led him to adapt the hierarchy rather than just accept it.

He questioned the hierarchy and added to it, rather than keep trying to use it as it was. If we have any sort of model in social science, we can use it to guide our thinking, but we have to be careful to ask questions about it, gather data, grow, and develop the model to fit reality—not fit reality to the model.