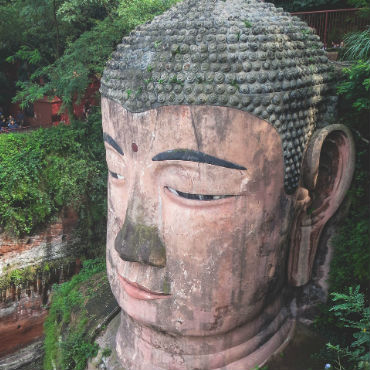 Mindfulness or McMindfulness: Can we learn from the West adopting Asian cultures?

The first entry in a multi-part series of blogs, Saybrook alumna Dr. Tamami Shirai speaks to her experiences merging Asian and Western techniques in her own professional practice. In part 2, she discusses “Relax, release, rebuild through silent meditation” and in part three “The importance of ‘checking in’ after silent meditation.”

In many ways, the cultural divide between Asian and Western cultures can be illustrated with their respective approaches to mindfulness. Mindfulness has long permeated Asian daily life and culture, and the West has been gradually adopting facets of it over the last half-century. Recently, this gradual adoption has skyrocketed as mindfulness is being explored in everything from health care and wellness to pop culture. While many are pushing back against the Western approach—calling it “McMindfulness”—I think there is still so much that both the East and West can learn from each other.

Growing up in Japan

I’m originally from Tokyo. Growing up, mindfulness was a constant part of my life, and I was immersed in it from a very early age. My home had both a Butsudan and a Kamidana—a Buddhist alter and Shinto altar. Also, I attended a Buddhist kindergarten (inside of a temple) and a Shinto-related private school from junior high school through college. You might say I grew up in a daily environment soaked in Buddhist and Shinto ideas.

When I made my way to the United States, I witnessed my first meditation practice. I was taken aback when the instructors used Buddhist singing bowls as the beginning and end of a short meditation. In Asia, when singing bowls are used, it is for religious purposes. Moreover, large singing bowls are only for priests; others are not even allowed to touch them.

While many religions practice mindfulness in various ways, much of what the West has adopted seems to be rooted in Buddhist traditions. Though, while they are using a few Buddhist techniques, many in the West are practicing only a very small part of what makes up Buddhism.

Mindfulness has been gaining momentum in the West for decades. Western philosophers and psychologists, including Alan Watts and Terrance Mckenna, have espoused the benefits of mindfulness. Indeed, much of what they discussed was adopted with the peace movement in the ‘60s. Although much of it seemed to go below ground during the ‘80s, ‘90s, and early 2000s, mindfulness has resurfaced in the last 10 years or so and, arguably, become even more mainstream. Mindfulness even recently made the cover of Time magazine.

In fact, mindfulness has permeated the mainstream to such a significant degree that you’ll find its concepts emerging in nearly every medium of pop culture—from podcasts dedicated to “being present” to books about incorporating meditation into corporate consultation. Unlike its emergence in the ‘60s, mindfulness doesn’t seem to be limited to a social movement based off of peace and love. Today, you have doctors who incorporate mindfulness techniques into their health care practices. UCSD also starts mindfulness courses for medical students as a mandatory course this year.

Many religious scholars, anthropologists, and cross-cultural psychologists have pushed back against this adoption, calling it “McMindfulness.” They note that this movement is only taking small parts of certain religious practices and using them for something other than their original intent.

Having grown up immersed in religions that embrace mindfulness, I certainly can sympathize with this point of view. However, I feel that something can be learned here—from both Asia and the West.

Mindfulness and meditation concepts have long permeated Asian daily life and culture. So much so, in fact, that they have become second nature.

Recently, I was invited to present at the inaugural conference of the Asian Society of Lifestyle Medicine (ASLM) in Taipei, Taiwan. An affiliate of the American College of Lifestyle Medicine, ASLM is an umbrella group for Asia-based professional medical organizations dedicated to advancing lifestyle medicine.

My presentation focused on my practice experience leading a meditation class at a cardiac pulmonary rehabilitation center in San Diego. I have provided this mindfulness-based meditation class since 2013 and have had over 300 patient interactions thus far.

Many participants in the conference presentation were physicians and healthcare professionals from various Asian countries, including India, Philippines, Malaysia, and Japan. When we started discussing the use of Western notions of using mindfulness in a medical or clinical setting, I discovered something surprising. None of the conference participants from Asian countries admitted to having experienced mindfulness or meditation in a medical setting.

One may think that because mindfulness is so ubiquitous in Asian culture that they would be quick to adopt these practices in providing care to patients in clinical settings. However, I sense that Asian health practitioners are still a bit confused about how to apply “Western-made” mindfulness and meditation ideas into their medical practice. They haven’t yet figured out how to take something that they’ve been surrounded by all of their lives and apply it in a clinical setting.

At least not yet.

In defense of McMindfulness

In the past, Asian physicians have not adopted these practices in clinical settings because they haven’t thought of mindfulness as a technique. Recently, however, there has been a significant shift in thinking. Today, they encounter Western ideas of mindfulness and meditation as something different or new and therefore perhaps beneficial to their patients.

The research should be more rigorous about mediation and mindfulness—something that the U.S. National Institutes of Health (NIH) agrees with me on. Whatever people label it—Buddhist, Orientalism, or hippy culture—Western-made mindfulness and meditation ideas are still useful tools and can be implemented in Asian health care practices.

On the other side, the West may be able to benefit by recognizing the cultural and spiritual significance of mindfulness. In Asian cultures, meditation and similar techniques are not just tools to accomplish one single goal; they are integrated into our daily lives. And through that, Westerners may be able to find some spiritual or health benefits.

Whether it is intended to seek spirituality, serenity, or just to look cool, using mindfulness techniques have a proven track record of benefiting the human condition. Given that, why wouldn’t we use them to benefit ourselves and our patients?

Dr. Shirai is a postdoctoral researcher at School of Medicine, University of California San Diego. She is a researcher, educator, and advocate of lifestyle medicine, and a facilitator of meditation class at a cardiac pulmonary rehabilitation in San Diego. She is originally from Tokyo, Japan.