This simple question can be a challenging one for young girls and grown women to answer: “How do you want your pretty?”

Julia Garcia, a Saybrook University student studying for a Ph.D. in Psychology: Existential, Humanistic, and Transpersonal Psychology Specialization, wants to make that a little easier with the creation of her mobile app KYA, where girls can describe their pretty with empowering words like “pretty powerful” and “pretty talented.”

“I interviewed thousands of girls before we started building the app,” Garcia says. “And the unanimous feedback I received was surprising. It literally made me emotional just to hear it. I was surprised and disappointed that I was surprised. They were saying they wanted to hear from strong women. When women share their stories, it resonated with them. It also reminds them of their mom or their sister or somebody who they wanted to build a better relationship with but maybe haven’t.”

Garcia has noticed a pattern of people wondering why she focuses on teen girls specifically.

“I’m told that teen girls are such a touchy demographic,” Garcia says. “And there are so many risks in talking about their feelings. I tell adults who ask me this: ‘What happens if we just keep taking that stance and we don’t intervene because it’s muddy, complicated, there’s puberty involved, and lower self-esteem is more likely? If we just continue to not address all of these things because it is complicated and it could be risky, they’re forced to figure it out in a digital world.”

For Garcia, this is personal. Her own struggles with depression, body image, and excessive partying almost made her lose her college athletic scholarship. She also admits that she wishes she had an outlet, in human and even technological form, that would’ve guided her in the right direction.

But the link from the digital world to the real world can be a complicated process. An increase in suicide rates among U.S. teens occurred at the same time social media use surged, according to data from the federal Centers for Disease Control and Prevention. Cyberbullying and the depiction of a perfect life are two reasons why social media is taking a hit on teens’ mental health.

But it’s not just teens who are being affected. According to Garcia, the jealousy and comparisons were going on long before social media came around and with an older audience.

“The comparison game is nothing new for young girls and women,” Julia Garcia says.

“The comparison game is nothing new for young girls and women,” Garcia says. “It’s just now channeled through a different device. We saw the comparison games in the ‘90s with magazines, right? And even before that TV ads. A collection of all of those, which we call Fake Highlight Reels, project a lot of the good times and maybe hide some of the other stuff for fear of not being like others. However, technology can also be a source of good. I wish there was more focusing on the positives it can have and how we can curate it to expand upon these.” 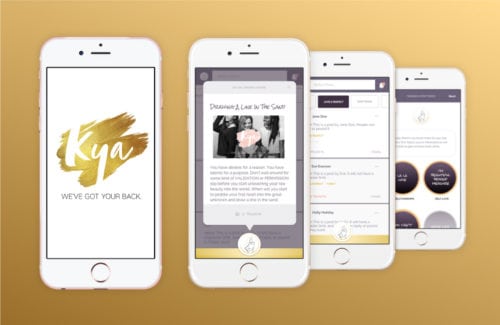 A casual browse through the Google Play Store will quickly prove Garcia’s point about the positive aspects of technology, in the form of apps such as Aura; Calm; Headspace; Moodnotes; Omvana; Stop, Breathe & Think, to name a few.

In a recent Huffington Post article, the writer declared: “The real problem behind our stress is not the fact that we are surrounded by technology, rather the way we make use of it.”

“I think people are starting—and different industries are trying—to optimize technology in their fields to help humanity in a sense,” Garcia says. “And I think that the more creative and clever we are, the more options we can provide as part of a solution.

“The mindfulness apps, the meditation apps, the breathing and anxiety apps, the blood pressure apps, and even the menstrual cycle apps are giving smartphone users the ability to be ‘in the moment.’ Technology is able to do is make us feel less alone. It won’t resolve all solutions for anxiety. However, the better prepared we are with facing adversity, challenges and trauma, and mental health issues, the better we are as a whole.”

Not losing the human element in technology

“There’s no reason social media’s face should be designed without a behavioral specialist,” Garcia says.

Although users of The KYA app will perform quite a bit of their work using the app, Garcia is adamant about how necessary the human element is.

“Our app is only given to people who have first had a face-to-face interaction with us,” Garcia says. “We onboard in person because I believe in creating a culture of a safe community. We are the first app to make sure there’s a face-to-face, human interaction before we send them into cyberspace. The top priority should not just be the advancement of education, health care, and all of the amazing things technology does, Let’s make sure it’s safe.

“I also believe that when these apps are created in these online communities that they prioritize and have expert psychologists and social health behavioral experts who are actually part of the design process so that we don’t leave out the human in our digital world. From a systematic approach, I think social and emotional health experts should be designing these systems we engage on with the developers and the designers. There’s no reason social media’s face should be designed without a behavioral specialist.”

In a world with the first robot lawyer, self-service library checkout machines, pharmacy machines, and self-driving cars, it may be more difficult to convince some that we still need that human element in order to interact in everyday life. For some, it’s a matter of not becoming totally socially awkward when around other human beings. For others, it’s the intensity of losing their jobs.

However, just as Garcia insists on the human element of her own apps, so far, soft skills are still something that will always be appreciated in a technical world. Social intelligence, social cognition, mentorships, collaborations, and conflict resolution are but a few factors that technology can’t master. It’s a human thing, they wouldn’t understand.