Somehow, the age of information seems to have left us less informed than ever before, and it has created the perfect environment for conspiracies to thrive.

Climate change is a hoax, Tupac is alive, Earth is flat, our world is ruled by the reptilian elite, and the coronavirus was originally developed as a biological weapon.

Conspiracy theories take many forms, but each share something in common—the disregard of a generally accepted conclusion based on factual information available. From a psychological perspective, creating or believing in conspiracies is viewed as an attempt to assert power or control in the face of circumstances that create feelings of helplessness.

Consider the assassination of President John F. Kennedy. It was difficult for many to fathom that such a powerful and protected icon could be killed by a single, disgruntled middle-aged man. So born were theories about the grassy knoll, an umbrella man, and even KGB operatives. While the Warren Commission’s ensuing investigation and resulting report eased the concerns of many, 13% of Americans in 1964 still refused to believe Oswald shot the president. Today that minority has become a majority, with more than 60% believing others were involved—despite the still overwhelming evidence to the contrary.

This change in public sentiment is symbolic of a broader retreat into filter bubbles and echo chambers, rising acceptance of alternative facts, and growing public distrust of established institutions. Somehow, the age of information seems to have left many people less informed than ever before, and it has created the perfect environment for conspiracies to thrive.

Shortly after the U.S. presidential election in 2016, two search terms spiked in Google Trends: “filter bubble” and “fake news.” It was an ominous sign in regards to how people had begun seeking out and processing factual information—which ultimately shapes their views of the world.

“There is an increasing challenge to the norm that there are essential facts, based on verifiable evidence, that everyone can build from as the basis for public discussion and policymaking,” says Joel Federman, Ph.D., chair of Saybrook’s Department of Transformative Social Change. “This has negatively affected public policy and public health in areas ranging from climate change to epidemiology.”

Many people also have a tendency to only trust sources of information that don’t challenge their established views of the world. The internet and, in particular, social media exacerbate this, providing the ability

to filter out information someone doesn’t agree with. Furthermore, these platforms allow people to seek out validation for views, opinions, or perspectives that fly in the face of truth. As a Facebook ad campaign ironically depicts, no matter how bizarre you may think something is, there’s probably a group for it—the Official Flat Earth & Globe Discussion Public Group has more than 128,000 members.

But filter bubbles promoting conspiracies can present a danger to the public. Flat-Earther “Mad Mike” Hughes was killed after launching himself thousands of feet into the air on a homemade, steam-powered rocket so he could see if Earth was really round.

Pizzagate is another prime example. Nurtured within the filter bubble of Info Wars’ infamous podcast and website, this conspiracy alleged that Hillary Clinton was hosting satanic rituals and sexually abusing children in the basement of a Washington, D.C., pizza joint. Days after the initial “report,” a man armed with a rifle, pistol, and knife raided the restaurant, hoping to save the captive children—he ended up in jail.

On a broader scale, the negative impact of filter bubbles is seen with the collective inaction around climate change. Some have argued that leadership in the U.S. is living within its own bubble—President Trump once claimed that climate change was a hoax perpetrated by the Chinese government—dismissing global scientific consensus and becoming the only country in the world choosing not to participate in the Paris Climate Accord.

The concept of global warming was created by and for the Chinese in order to make U.S. manufacturing non-competitive.

Historically, filter bubbles have helped promote conspiracies leading to violence that targets specific groups and cultures. The Jewish community, for example, has long battled the Zionist-Occupied Government conspiracy, which claims that Jewish people are secretly exercising control of governments throughout Europe and in the U.S.

“It’s important to use our critical thinking skills and challenge conventional wisdom, which tends to be framed by the interests of the wealthy and powerful.  But there are also risks that emerge when groups of people immerse themselves in narrow bubbles where there is a constant repetition of claims that reinforce a particular distorted reality,” Dr. Federman says.

“They can build a feedback loop where these distortions are repeated over and over again until those in the group are overwhelmed with this new distorted reality,” Dr. Federman continues. “The danger increases when we demonize those outside our bubble, rather than seeing them as complete human beings who happen to have some differences from us. Ultimately, the goal of political life is to bring people together into a shared and diverse community where we can solve our common problems together. We have to move beyond our bubbles.”

Dr. Federman further notes the value of a liberal arts education, which helps facilitate the types of engagement and approaches to critical thinking needed to develop a richer understanding of the world. He suggests that we can begin to pop filter bubbles through encouraging interaction with more people and greater exposure to more sources of information. “Without greater exposure to a culture of dialogue, people risk being limited to very narrow, monolithic, and stereotypical conceptions about particular groups of people, the potential of   human beings in general, and the tremendous commonalities across those different groups,” he says.

Facts should be indisputable. In an argument or debate, they may be interpreted and present

ed from different perspectives, but at its core a fact is synonymous with truth. Therefore, it is important to draw a distinction between conspiracy theories and the use of alternative facts.

Alternative facts, simply put, are lies. They do not exist; the phrase itself is an oxymoron. Conspiracy theories, however, can be based around factual information—albeit through a much filtered lens. Instead of using all facts available, conspiracies are often crafted using specific facts (usually out of context) that validate a preconceived notion. Weave enough of those facts together and you can craft one hell of a story.

The U.S. refused to officially acknowledge a secret U.S. Air Force Base in the Nevada Desert until 2013. The U.S. military has stated that it represents “a flexible, realistic and multidimensional battle-space to conduct testing tactics development, and advanced training.” It remains off-limits to the public.

“In a world of ‘alternative facts,’ it is increasingly important for people to develop the capacity to navigate the information environment with critical thinking and media literacy skills, so that they can know how to avoid being overwhelmed by appeals to prejudice, misleading arguments, and outright untruths,” Dr. Federman says.

Whereas alternative facts may have been squashed on arrival in the past, society’s filter bubbles now allow them to compete on a level playing field with the truth. This, in turn, is furthering confusion and distorting reality for millions. In the past, people could rely on certain historical institutions to guide them toward truth; today some people view many of these institutions with suspicion.

“Public opinion surveys have shown a consistent trend toward decreasing trust in a variety of institutions—from higher education, to religion, to journalism, to politics,” Dr. Federman says.

This has helped amplify the negative effects of filter bubbles, echo chambers, and those pesky alternative facts. 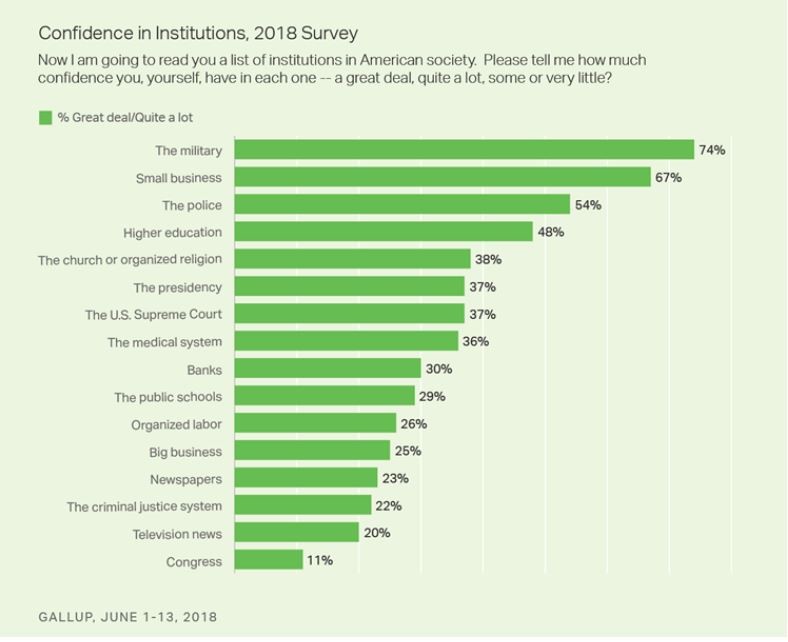 A Knight Foundation and Gallup poll in 2018 found that nearly 70% of U.S. adults believed their trust in the news media has decreased in the past decade. Another poll found the only institutions we have much confidence in are the military and small businesses.

Much of this overall decline in trust begins with a lack of institutional leadership and communication strategies that have yet to catch up to our fast-paced world.

“Media literacy is something that I know many organizations and institutions struggle with,” says Tom Hayashi, Ph.D., Saybrook University’s program director for the Department of Leadership & Management.

He adds that organizations need to not only be cognizant of the how they are communicating out but also what is being said about them.

“They need to be prepared to address issues that are false,” he says. “Even if it is not entirely false, they must be ready to address it and potentially get ahead of what the messaging about them is going to be.”

Hope for the future

In a world abound with conspiracies, steps can be taken to mitigate their damage.

Many social media platforms have already begun attempting to address the issue. Facebook has hired an army of third-party fact checkers to flag false or misleading posts. Both Facebook and Twitter continue to remove thousands of fake accounts created to spread conspiracies and false information. Research has shown that labeling a Facebook post as “disputed” can reduce the number of readers who believe the information by 10%.

The International Consortium of Investigative Journalists has released tips for spotting fake news and misinformation, asking, “Does it pass the CRAAP test?” The criteria of the CRAAP test include:

In a detailed report by the Brookings Institution, technology firms are encouraged to “invest in technology to find fake news and identify it for users through algorithms and crowdsourcing,” which former FCC commissioner Tom Wheeler argues can be developed for the public interest. The report also states that greater governmental funding is needed to “support partnerships between journalists, businesses, educational institutions, and nonprofit organizations to encourage news literacy.”

“Having a commonly shared set of facts doesn’t mean that everyone has to have the same point of view or trust all the information they are given,” Dr. Federman notes. “The goal is to create a society where people are able to engage in dialogue, speak their own truths, and listen to each other in a way that can generate understanding, even as we differ.

“Building understanding across social and political divides also builds the trust necessary for common action to address society’s problems, which can be a powerful antidote to false narratives and conspiracy theories.”

If you are interested in learning more about the community and academic programs at Saybrook University, fill out the form below to request more information. You can also apply today through our application portal.