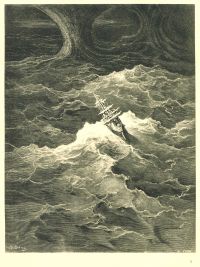 “It is an ancient Mariner, And he stoppeth one of three. By thy long grey beard and glittering eye, Now wherefore stopp’st thou me?” (Imagery and Symbolism in the Therapeutic Process)

Symbols and imagery educed from the subconscious can be interpreted within the therapeutic process. Existential, humanistic, and phenomenological approaches focus on conceptual, emotional and verbal realities, while transpersonal approaches focus on spiritual longings and experiences as keys to self-actualization. The humanistic movement arose in the early 1960’s out of dissatisfactions with the natural science conception of the person exemplified by the medical model, the determinism of psychoanalysis, and the focus on psychopathology. It explored aspects of experience including those that do not lend themselves to experimental research and quantification. For example, Maslow studied the talents, capacities, and potentialities of self actualizing personalities. The existential/phenomenological and transpersonal approaches then developed in reaction to perceived gaps in understanding the individual’s reality and lived experience.

Myth and Metaphor
Rollo May (1975) believed that we express our being by creating myth and metaphor in psychic content to provide us with direction. To re create the self in case history, the psychotherapist must hear the client’s story in presenting symptoms, integrate the threads of images and memories re woven, and then restore them to the person. In The Rime of the Ancient Mariner (Coleridge, 1798) there is a description of a man who compulsively tells his story to everyone he meets until he finally finds the right listener. From a developmental perspective, this story might be an account of merging with and separating from the mother; a Jungian account might string together figures and journeys into the underworlds; a Freudian account might emphasize the introjection of one’s strict father as superego; an existential account might relate peak experiences and creative choices; and a DSM account might stress biological and behavioral facts about psychopathology. Each of these perspectives share the art of translating ordinary reality into deeper psychological context as a way to glimpse one reality through that of another. Psychological truth thus shows itself in complexity, multiplicity, and symbolic form.

Imagery. As the shadow on Plato’s cave wall, psychological experience is fundamentally expressed in images. From an Aristotelian point of view, an image is a thing; a picture, seen with the eye (or inner eye). Defining the image as a picture, either in the brain or the retina, is commonly used by cognitive behavioral psychology and the DSM. However, image is more accurately experienced as synesthesia in which one sense stimulates others. As in poetry, images mix up our partition of the senses and restore us to a more primary, holistic way of knowing in which meaning is conveyed, interpreted, and understood via the relationship between our senses.

Imagery contains structure in metaphor, symbol, and myth. Knowing whether the image is expressed at the level of metaphor/phenomenology or archetype/depth psychology can clarify the language, interpretation, and intervention. While these levels are not discrete categories, they can serve to guide the clinician. The symbol is a form of correspondence between one’s inner, felt-sense and outer expressed behavior and language. As metaphor, the symbol has a primary and a secondary reality, but can also encode levels of meaning and complexity.

Symbolism. Symbols are a fundamental way in which the mind knows and understands reality by taking us to the universal structures of human existence. Symbolic knowing distinguishes the manifest (on the surface) meaning from its latent (hidden, revealed) content. While symbolic interpretation treats phenomena with skepticism, phenomenologists value the manifest presentation for the unfolding of meaning. Archetypal symbols also have universality; however, because the intention of archetypal depth psychology is transpersonal, not to solve problems, but to deepen the soul, finding oneself in the center of a complex takes us beyond the abstractions of concept and structure to imagistic essences that can cut to the core of existence. These distinctions suggest that different stances are needed for the interpreter as therapist.