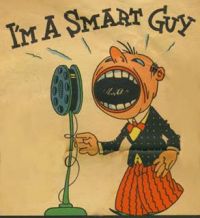 In the long run, debate tactics can be as dangerous as bullets. Reading the arguments in America’s ongoing culture war, I am increasingly reminded of George Orwell, who condemned those who “speak in slogans and think in bullets.”

The latest culture war debate tactic among those smart enough to come up with it but not wise enough to know betters, is the claim that you don’t really believe what you believe. You only believe it because you can’t help yourself.

We see this all the time in articles in the popular press with headlines like “The Neuroscience of Republicans” and “Science Explains why Conservatives Believe What They Believe.” Whole books have been written on it, and what it boils down to is this: “those people” (whoever they are) would hold opinions exactly like ours if they could only think straight, so we’re investigating why they can’t.

It’s a neat rhetorical trick: instead of actually debating the substance or merit of ideas, you declare the people who hold them to be incapable of legitimate debate. You delegitimize their humanity in order to win the argument.

A perfect example, published over the weekend at Salon, asks why anybody would ever be religious given that a majority of contemporary scientists and philosophers (the “smart people” in the title “Religion’s smart-people problem”) are not. But what really concerns author John Messerly is why those “smart people” who are religious are religious. Surely, no educated person could have a view different from Messerly’s!

He comes up with two reasons: “First, smart persons are good at defending ideas that they originally believed for non-smart reasons. They want to believe something, say for emotional reasons, and they then become adept at defending those beliefs.” And “Second, the proclamations of educated believers are not always to be taken at face value. Many don’t believe religious claims but think them useful.”

What both points have in common: they deny the very idea that people who hold views different from one’s own are sincere. They haven’t actually considered the evidence and come to a different conclusion—they’re either defending an emotionally held position or they’re lying. They have “non-smart reasons,” which by definition are illegitimate.

These exact same arguments, of course, can and have been used against anyone holding any position at all. Back when a majority of scientists held racist views, the educated classes told themselves that anyone who wasn’t racist was surely just lying to themselves or acting out of misguided compassion—which isn’t a “smart person” reason. Back when phrenology was in vogue, anyone who didn’t believe in phrenology simply lacked the cranial capacity to understand its nuances. Obviously.

This game is easy to play: Why, one could easily argue that a majority of scientists and philosophers only claim to be non-religious because they’re afraid of being censored by the establishment opinion, and thus keep their dissent to themselves! One could even argue that Messerly’s atheism is just compensating for a childhood disappointment. I wouldn’t—that would be cowardly and dehumanizing—but the door is open for anyone who wants to …

Rather than acknowledging that intelligent people can hold legitimately differing views on many issues—even ones we’re passionate about—many “smart” people tired of justifying themselves have now taken the position that any deviation from their epistemology must be the result of either dishonesty, psychological incapacity, or a neurological defect. It’s the academic left’s version of the conservative canard that if you disagree with what we’re doing then you must hate America.

This is dangerous. For all the breathlessly contemporary “neuro” pap and “science proves” headlines, there’s a long history of this tactic, and it has always been used to justify terrible things. It was the essential argument for colonialism: “Well,” white industrialized folks told themselves, “these primitive peoples will thank us once we’ve taken their land and imprisoned their leaders, because it will help elevate them to our culture and teach them the error of their ways.” Since people with different culture weren’t really capable of having “rational opinions” (which we knew because they were different than us), anything we did to them was justified. We, after all, were the smart ones.

The official Soviet philosophy of Dialectical Materialism worked the same way: the Party had demonstrably proven that there was only one way to look at the world, and anyone who saw the world differently must therefore either be a traitor of insane. For 70 years, Soviet mental hospitals were better known for their holding of dissidents than their treatment of mental illness.

History is pretty clear when “smart” people decide no one else’s opinion matters—terrible things follow. Believing that one has an unassailable grasp of reality, it turns out, is itself intellectually lazy.

Existential psychologists and Saybrook faculty member Kirk Schneider has written extensively about this phenomenon in his book The Polarized Mind and suggests that the inability to see one’s intellectual antagonists as human is destroying us. These debate tactics are a clear example of that.

Difficult as it may be when these tactics are employed by people with whom we agree, I’d suggest that it is the first duty of existentialists to ensure that the fundamental humanity—and epistemological autonomy—of all people are recognized as debates become more polarized and a scientific gloss is used (again) to explain why some people with differing opinions need to be thought of as incapable of holding ideas as rational as our own.

Some people do argue in bad faith, and it’s fair to call them out on that if we can demonstrate it *as individuals.*  But if we refuse to recognize the humanity of anyone we disagree with, and the legitimacy of their ability to disagree with us, we will end up doing inhuman things.