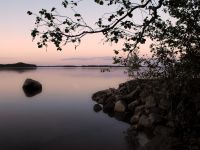 In the beginning of October, I was lucky enough to participate in a two-day workshop with Dr. Kirk Schneider, here in Athens, Greece! It was organized by “gignesthai,” the Hellenic association for Existential Psychology. I’ll write to you about this experience, with my own little words and from where I stand today. Maybe if I wrote this post some days later, I would focus on totally different things. I couldn’t possibly bring to you all of what happened there, or all of the wonderful things Dr. Schneider said to us, but I’ll share with you my personal experience (along with a lot of quotes), hoping that I’ll do it justice (and if he ever reads this piece he won’t feel disappointed; oh, the angst!).

The workshop started with Dr. Schneider asking a girl from the group this simple (?) question: “How are you?” She answered, and he posed the question again for a few more times, saying there are many layers of asking, and he could keep asking her, but he actually had to stop for the sake of the workshop’s purpose! What amazed me was his stance during his asking that question. He was so relaxed, tranquil even, so open to what he was going to hear. I can’t imagine myself asking this (or any question for that matter) repeatedly, with such kindness and eagerness in my face and body. I suppose I would feel anxious about what the other person would answer, but then again maybe that’s my personal burden, this anxiety that’s hugging me like a super cute but also asphyxiating little bear.

Back to the workshop. Stance. And presence. These are the two super-important words that have stayed with me since. It’s not about techniques (as, we existentialists love to rediscover again and again), it’s not about asking the right questions (or not only about them), it’s not about knowing the DSM or all of Yalom’s books by hand. Presence is above all, as Dr. Schneider kept reminding us. “First comes presence, then therapeutic alliance. Presence keeps you engaged, makes you feel hope.”

Presence is also this little thing that a lot of psychotherapy training schools forget to teach you. But can presence actually be taught? That’s something else to consider. Being present means being ontologically available. “It’s holding and illuminating what is palpably significant between therapist and client and also within the client. Presence gives us attunement to what’s going on between us.” He proposed that we use “our bodies as a barometer” of what’s going on in the therapy room. “We need to bring our senses to the room,” he said, and take seriously our bodily sensations, not hold on to them religiously however, but always check with the client to see what’s going on. For example, I may feel something in my stomach as the client says something while he’s smiling. So, I could ask him to check if what I felt has really some ground with them. Dr. Schneider believes in “the body as wisdom; that’s not about impulses and the such but the body as indicator.”

This brings me to another important theme, that of active mirroring. In Existential-Integrative therapy, the therapist might share his experience with the client (so that makes it a different kind of mirroring than that used by Carl Rogers) because “if used artfully, it can show the client how they’re living their life and how they’re willing to live their life. These are also the core concepts of E-I therapy. The therapist might share something of his senses to deepen the client’s exploration. When the therapist is more alive and appropriately expressive, it can be helpful for the client, because that’s exactly how people live in the real world.”

With active mirroring, “you’re inviting the person to talk, you make it available for them to go deeper.” It’s like holding a mirror, or being a talking mirror if you wish, and you can say things like: “I see your eyes moistening a little bit when you say that. What’s that about, if you’re willing to share?” or “I saw a moistening in your eyes but now you’re laughing, what’s going on?” “You’re asking with softness and you’re alerting the clients how they’re blocking themselves right now.” It’s important that we ask softly and be careful with our confrontations because, as Dr. Schneider told us, “you may be the agent of change instead of the client. We are here to support them, but not making it our change, our agenda (by pressing, for instance). The struggle must be theirs.” Wise words. How true is this? How many times we over-try for our clients? “People won’t change until they’re ready to change.” Comforting, isn’t it? And a little scary, too, as you see your precious agenda get thrown out of the window. Or maybe it was exactly your agenda which made things stuck in the first place? Questions arose in that workshop.

Dr. Schneider talked about more amazing things but for the sake of space and brevity, I must leave some out. However, I must mention the feelings that awoke in me as I was had an opportunity for real-time supervision—that turned to atomic therapy—at the end of the seminar. It was so powerful, I can’t even begin to describe it. He was so alive, so kind, so PRESENT, so eager to explore with me what went on with that client that was troubling me, only to find out it was actually an issue of mine that troubled the therapy! Ah, I can’t put it in words but I’ll give it a last try with something he reminded us again and again in those two days, something that Rollo May used to say. “The life is at stake here and if we overlook that, we might miss important chances of change for the person.” Let me tell you, I don’t think he ever overlooks that!

By the end of the workshop, we all felt energized and ready to get into some serious work! Dr. Schneider kindly reminded us what existential therapy is about and how we really need this in these times of quick fixes and fast-food solutions. The spark of existential therapy is still alive! Let’s spread the word!