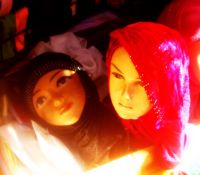 In The Atlantic this week, we see three different examples of how context changes the psychological picture dramatically. The first asks the question “Do Liberals Really Care More About Empathy Than Conservatives?” The article cites a recent Pew research survey polling respondents about what values they would want to teach their children. Those who classified themselves as “consistently conservative” selected values such as obedience and religious faith, while those defining themselves as “consistently liberal” chose tolerance, creativity, and empathy. While the survey seems to hit all the keywords associated with both groups, the article still queries whether this means that this means that liberals shun obedience and more importantly, conservatives shun empathy. The implication seems to be no.

The second article discusses lonely people, describing how, according to a recent study, this group seems to perceive doll faces as human. This rather bizarre topic of research suggests that the more people need companionship, the more likely they are to see human features even in inanimate objects. The experiment involved viewing faces that ranked along a continuum ranging from containing 0 percent human features to 100 percent human. “Normal” was declaring faces as “animate” at the level of about 69 percent or higher. However, those who identified themselves on a questionnaire as having great needs for social connection saw the faces as animate starting at only 50 percent. The ramifications of this study are unclear—is this because lonely people are trying to make more social connections or have lost their ability to identify appropriate social connections? The article seems to be torn between these two poles. But it’s definitely an interesting question to ponder.

And finally, The Atlantic’s third article looks at body, lifestyle, and socioeconomic status, discussing recent research that found that poor women tend to be more overweight than poor men. Looking at data beginning from a longitudinal study beginning in Wisconsin in 1939, tracking the health and social information for a group of men and women, researchers discovered that starting with school, overweight girls performed worse than their male counterparts, leading to higher dropout rates. They are less likely to complete college, let alone attend college, and have tendencies towards substance abuse, according to the article. Thus, they have lower-paying jobs and fewer opportunities. This confluence perpetuates the cycle so that by middle age, these women are simply poor and obese—what the researchers call “mutually reinforcing.”

Recognizing the complexities of the perspectives—the multitude of attitudes—is yet another reason why existential psychotherapy, with its emphasis on respecting one’s individual experience, is so vital in 21st century society. How can any kind of cookie cutter approach, with buzzwords and diagnoses, fit into any of these boxes when even the boxes can no longer contain themselves?