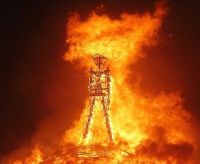 I just returned from my fifth year at Burning Man, and like every other year, I was not disappointed. With all of the recent press coverage, both positive and negative, Black Rock City is beginning to give the impression of a trendy spectacle of hippy Zsas Zsas and Warhols, but I caution: nothing could be further from the truth.

Before I went to Burning Man, I was told that there is no way I could possibly understand it unless I attended. I found this to be quite true. As an existentialist, I found Burning Man to be by far the most profoundly existential experience I’ve ever had. It’s not that the life we live every day isn’t already rife with existential grist for the mill if we pay attention. It’s that nowhere else in the Western world is a person not only allowed, but encouraged to step out of the comfort zone of what is called “default reality” and experiment with their most raw personal experience. This holds the inevitable potential to alter one’s relationship to self and other. Regarding the departure after a wondrous expedition through Black Rock City, the epiphenomenon of Burning Man can be a strange emotional paradox of elation and grief. One can certainly adopt the principles of Burning Man, but it is not easy. One can feel more themselves, and this may result in feeling more alone.

I was sitting around a campfire one night with a group of people who were entirely “virgins,” discussing their impressions of Burning Man and whether or not they would return. The comments were mixed, but one young woman in particular expressed an immediate visceral knowledge that she would return and that this place truly felt like “home.” We had been discussing astrology, a topic that can seem antithetical to existentialism due to its tendency towards categorization and prediction, and yet highly existential regarding its connection to the mythical and depth psychology. The young woman I was speaking with had several planets in Aquarius, and I started to explore why a person with Aquarian features would fall in love with the Burning Man community. As I was connecting the dots, I thought of the mythical God represented by Aquarius, Prometheus.

Prometheus was a Titan who rebelled against the orders of Zeus, stealing a spark of fire to give to humanity. As a result, he was doomed to suffer for eternity, chained to a rock where gulls dined daily upon his liver that continued to grow back after each mincing. It suddenly occurred to me why Burning Man was such a Promethean event. The discovery of fire by Prometheus was not necessarily for the sake of invention and egoic self advancement, but precisely for the advancement of humanity. It was allegorically an equivalent to the creation in Genesis, albeit compassionate in its perspective. There is something altruistic in this myth, and the damnation of our protagonist is more due to the selfishness and jealousy of the Gods than the arrogance or trickery of a human being.

One of the central tenets of Burning Man is that everything virtually burns in an endless stream of consciousness. We are constantly letting go, constantly reinventing ourselves, constantly rebirthing into the next moment precisely as we are dying that same moment. This is one of the reasons why much of the art is burned. It represents the temporality and yet the continuity of life. The two are inexorably connected. Nothing stays alive forever and yet nothing really dies. It’s more than mind-bending. If one dares face it, it’s heart wrenching. Thus, the impetus for carpe diem: “seize the day.” I see now why idols are idols. Their stationary representation negates the very nature of the miracle of life, and life is constantly moving, changing, growing, evolving, burning.

Although radical self-expression and self-reliance are the principles I believe gain the most press, radical inclusion and community are also central tenets of Burning Man. There is a gift economy. In other words, if we choose to give, we understand that the gift is independent of receipt. If we receive, we are not expected to give back. Additionally, we give of our very being. We try to drop what has been impressed upon us in the “default world” to discover what is most essentially who we are, and as a result, we have something far more genuine to offer. Connections are deepened. Love is ubiquitous and regenerative, a result of being rather than forced attention. Burning Man truly is about “fire,” and fire is not static. It is a process that both illuminates and destroys. I can’t help but think of the Promethean myth and the fate of he who gave consciousness. He was elevated to a rock above the fluid, ever-changing ocean from which his vision was panoramic. He could see the world to which he gave, and yet he felt the agony of each moment being picked away, growing back again to face yet another death. Oddly, his fate was for the love of humanity.

To me, Burning Man is a place in which a wider scope of consciousness is possible. Insights and differences are entertained with greater acceptance and tolerance, emotions can be felt more deeply, and life can be lived more fully. Most remarkably, it is there and then gone but leaves an impression that cannot be eradicated. It is a state of consciousness that is shared by an estimated 60,000 people. It is a tribe of fire worshippers embracing life to the fullest, engaging, and letting go, engaging and letting go, engaging and letting go, the fire ever present, even when pressed down to ash. And we are ash. “We are stardust. We are golden.  We are caught in the devil’s bargain and we’ve got to get ourselves back to the garden.”  To me, that desert of extreme temperatures and elemental conditions becomes a garden of our own creation.

Once a year, a massive amount of people gather to watch Prometheus burn in the very fire he gave. This may not be the story that others see, but it is how the myth manifests for me. It is as existential as it gets. We are celebrating consciousness with all of its pain and glory. We celebrate simultaneously together and alone. We burn bright, and we hope to take some of this particular fire with us in a traveling way of being that we can call “home,” more alive when we leave than when we arrived.