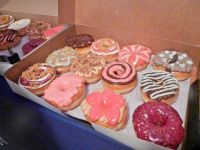 The problem with saying yes to one thing is you are thereby saying no to everything else.

Yalom makes this point at least 63 times in his writing. I made that number up because I am too lazy, really, to track down any or all of the times he said it. So, I picked a number. Sixty-three is a good number, big enough to be implausible so you know I’m joking, not so big as to overdo it. Picking 63, I said no to 62, 61, and an infinite number of other numbers. What a mess.

I hate choosing things. Most folks, they like to have choices. Not too many—just about eight is ideal. I hate it. I want to know where I am going and what I am supposed to do when I get there. I was at a job interview not long ago, and the interviewer asked why I wanted the job. I said I didn’t, not really, I just wanted to work for the institution, and the job I was in pays poverty wages. They didn’t understand the answer. You don’t either. I don’t care what job I’m doing, I want you to tell me what job you want me to do.

I liked the Air Force. That’s how they worked. We need someone to do job X. You’re qualified. We’ll train you and send you there with orders and tell you who’s in charge and who you’re in charge of. Off you go.

I’m a fat old pacifist now. That’s out. I have to knock around out here in the world like you do, wondering where I should go and what I should do when I get there. And the economy stinks. Last year, I was a teacher who did some writing. Now I embrace existential chaos. I’m a novelist who does some teaching. Because they are never going to tell me where to go and what to do when I get there, never again.

I go to the grocery store, and I need some toothpaste. I hate buying toothpaste. Because there are 63 varieties to choose from, and I have no criteria upon which to operate. It is overstimulating. I wind up picking something and running. Buying pants is the same. I can’t even remember to try them on or sometimes even to check the size. More often than not, I wind up taking them back. Choosing is hard.

This brings us to donuts.

There is a boutique donut shop in my neighborhood. Amy’s, it’s called (the editor might blur the name). I stop there when I’m on my way out to the lake to not catch any trout. There are 63 varieties of donuts, crazy creations like it’s a cupcake shop in the big city. Cupcakes topped with candy or cotton candy or blueberries or even bacon. God, I love ’em. But I don’t want to choose.

I pick the Heath-bar donut, I say no to 62 other donuts. The Boston creme, for example, or the traditional cake. (Oh, those are good, though). Pick the maple bar, skip the M&M.

My approach to this is to not choose. I ask the nice person behind the counter what their favorite donut is. They often look stunned by the question, or flattered that their opinion matters, or puzzled by my motives. They ask if I’m sure I want them to choose. Everyone wants to choose. That’s the fun, isn’t it? To have a huge pile of choices to make?

No, is my answer. No, it sucks. They’re all good, that’s the thing. We’re talking about donuts here. They’re good donuts. Whatever you choose for me is going to be just fine, because they’re donuts, and you guys are great at making donuts. And I’m always right.

Sometimes they make a safe choice, sometimes a risky one. (The bacon donut was delicious). But they all taste good, because donuts taste good. And I didn’t have to say “no” to any of the donuts. I just had to say “no” to choosing one.

Sometimes I find myself in a restaurant. Not often, because my jobs pay me poverty wages. But the same approach works there. “What is your favorite menu item?” The people who bring your food generally are obliging and make good choices. It helps that I think all food is like donuts: if you’re good at making it, it’s good. I even like food that I don’t like.

Now, I could have a lot of reasons to be telling you all this right now. Maybe like 63 of them. But I want you to retain the freedom of choice I don’t often want. People like that. So, I’m not going to say what I mean. You decide.