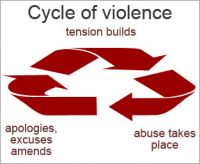 Big in the news this week has been the videotape undeniable revealing the ugly truth that most people already knew, but now could no longer try to deny—that Ray Rice, now former football star for the Baltimore Ravens, had physically abused his then fiancée and now wife, Janay. Often, in existential psychology, we speak about subjective truths. But this videotape, showing Rice punching Janay in the elevator, knocking her out, would be incredibly difficult to interpret in another way.

The Washington Post reports that the revelation of this video—Janay Rice’s experience—is proving a powerful impetus for many women to start to take steps to escape their own domestic violence situations. The Post reports that local call centers in the DC Metro area have had a tremendous increase in calls from women seeking help, shelter, and guidance. And all the while, Janay Rice, the Post reports, is still saying this is all a private matter, to be dealt with between her and her husband.

This kind of statement from Janay Rice is not unusual. The Atlantic reports that for many women involved in abusive relationships, leaving is far more complicated than staying. The article cites 1999 research by a law professor who also survived abuse who said that a battered woman is 75 percent more likely to be murdered if she tries to leave than if she stays. Then, of course, there are all the ways the partner or ex-partner may try to victimize her financially. And never mind the cultural pressures, the article says, to “stand by your man.”

These ideas also correlate with much of the current research. For instance, Psychology Today ran an article discussing self-deception.  How do we learn to trust our instincts—to know when reacting “appropriately” to experiences or if we are reacting “irrationally” to situations? According to Psychology Today, it is a matter of practice and experience—of learning and growing from each individual situation.

But some dealing with domestic abuse don’t want to come out from the haze of self-deception—they want to continue living with the false beliefs, since as noted above, oftentimes the alternative is so very much harder. The New Yorker ran a story entitled “I Don’t Want to Be Right,” which discusses situations in which people do not want to change their beliefs, even if presented with evidence that makes their beliefs untenable. For example, the article cites the growing movement supporting raw milk, in spite of the dangers in (in many cases, improperly handled) raw milk and the many hospitalizations associated with drinking raw milk. Yet, those who say raw milk is far healthier than 100 years of pasteurized milk ignore the dangers and the reports of hospitalizations, at their own risk.

And as Science Daily reports, perhaps being bullied or abused is better than the alternative of being ignored. While the study reported in Science Daily referred to bullying in business, no one wants to be ostracized, whether at work or at home.

But is negative attention really better than no attention? Would you rather have a husband who punches you in an elevator or remain unmarried? Maybe the answer lies somewhere with restoring a sense of respect and dignity—to both partners—so one won’t have to hit and one won’t have to be hit… but how? That is the real question left from Ray and Janay Rice story—how to solve the problem of domestic abuse. But maybe now that it’s on the table, we might be that much closer.