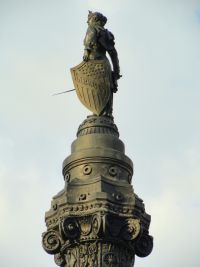 25 years ago, the forces of historical determinism made a bold prediction: history had ended. Liberal Capitalism, according to Francis Fukuyama and his allies, was the only model of governance that made sense and served humankind’s self-interest—and therefore the only organizing principle of society that would remain in just a few years.

This was a terrible prediction, but a useful experiment: the trouble with historical determinism up until this point was that it always demonstrated its inevitability after-the-fact. Hegel didn’t predict that Christianity was the epitome of Christian religious culture, he came to a European culture stuffed with philosophical Christianity and said “that couldn’t have gone any other way.” Marx’s notion that cultural change always follows technological efficiency is surely a penetrating insight—but outside of the relatively banal observation that “technology impacts culture,” or “culture reacts to technology,” no one has yet made a useful prediction about the one “following” the other. Instead, we have vague techno-utopianism (“the Internet will redefine democracy!”) and endless analysis of how the Industrial Revolution couldn’t have gone any other way.

The point is that human beings are not toasters, and human culture is not governed by immutable historical processes. Francisco Fukuyama helped demonstrate that quite clearly.

Far from there being no alternative, the world appears to be filled with contenders to the throne: the Chinese Communist Party maintains that the prosperity of capitalism can be had without any democratic representation; Vladimir Putin is calling for an anti-Western block of nations underpinned by “traditional values”; global corporations are practicing a kind of post-national kleptocracy; and an abundance of failed states are making a case for failed states themselves to be a global template; states based on fundamentalist religions are returning with a vengeance.

Not only are there plenty of alternatives to liberal democracy—however bad—but those blessed to live within a functioning liberal democracy appear to be fatigued with it. As though the problems of liberal democracy in the modern world were severe enough to make it comparably bad to the alternatives—as if a system where corruption is a problem is actually comparable to systems based on corruption. As though a system with an imperfect record on human rights is actually comparable to systems that do not value rights at all. When confronted with the self-evidently terrible options confronting the world, defenders of liberal democracy seem too worn down to defend very much. They seem both to be going by rote while having misplaced the script.

This inability by its contemporary defenders to come up with a pressing argument in support of liberal democracy is far more threatening to it than any of the “alternatives” now upon the world scene. It is liberal democracy’s weakness, not their strength, that is the cause of their rise to prominence.

Writing for The Atlantic, Timothy Stanley and Alexander Lee make an impassioned case for liberal democracy, and base it on sound existential principles: liberal democracy is of value because it respects the dignity of personhood.

“Surrounded by the confused, jargon-ridden babble of political commentators today, it is perhaps easy to forget that liberalism is defined by a commitment to liberty,” they write. “At root, liberty is a concept grounded in the individual. It is the freedom to be all that one is, to actualize the fullness of one’s potential as a human being endowed with the capacity for creativity and the ability to make autonomous value judgments for ourselves.”

“(L)iberty in its purest form,” they add, “can be thought of as the realization of man’s inherent dignity as a human being.”

Stanley and Lee make a compelling case that the language of existential discourse—at its most basic, and most fundamental—may provide the rhetorical shot-in-the-arm that our politics need. The idea of dignity of personhood, of the fundamental worth of people and the choices they make, is still inspiring.