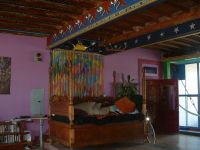 Aboard the Vallejo. Photo by Rick Umbaugh.

The following is a (true) tall tale for existential-humanistic researchers demonstrating that not all research has to be tedious.

When I first enrolled in the Alan Watts course at Saybrook University, I wasn’t too impressed by Watts. I thought he was sort of a pompous Brit lording it over the colonies—he even admitted he used a walking stick as an affectation. And of course, there was his attitude toward the Beats in his Beat Zen, Square Zen And Zen (1959) stating that in America, Zen was “young Americans’ non-participation in the American way of life” (p. 92). Watts went on to say:

It ranges from a use of Zen for justifying sheer caprice in art, literature, and life to a very forceful social criticism and “digging the universe” such as one may find in the poetry of Ginsberg, Whalen, and Snyder, and rather unevenly, in Kerouac, who is always a shade too self-conscious, too subjective, and too strident to have a flavor for Zen. (p. 92-93)

As a Beat aficionado, this description of the Beats’ involvement in Zen was quite offensive! In studying Watts, I learned that it was actually Gary Snyder—one of the Beats about whom Watts had been particularly critical—who was able to describe to Watts what really happened in a Zen Meditation temple in Japan. My initial negative reaction to Watts began to mellow as Watts showed his humility as he blended into the San Francisco culture and became a more vocal advocate for the popularization of inner exploration via Zen, LSD and personal growth.

While enrolled in the course, I heard Gary Snyder read poetry at the Alliance Francaise here in NYC. I spoke with Snyder afterward about a radio broadcast on Pacifica Radio that he, Allen Ginsberg, Timothy Leary, and Alan Watts presented from Watts’ houseboat in Sausalito in the late 1960s. These four represented the elder statesmen of the Beat movement as it had moved into the Hippie Movement, and they had been giving their impressions of the direction the counter-culture was taking after the Summer of Love, Woodstock, Vietnam Moratorium, and the Free Speech Movement. When I talked to Snyder about the broadcast, he laughed and told me the houseboat was still stuck in the mud in Sausalito. He said that I should find someone to show me where it is.

I had always wanted to explore the houseboat because Neal Cassady’s only manuscript had been left out overnight on a houseboat in Sausalito, and unfortunately, the manuscript was blown into the bay. Somehow, I thought I could resurrect the text from the deep after some 60 years. Coming home from the Snyder reading, I walked across Central Park South, looking up in the Park, as some modern day Holden Caulfield in J.D. Salinger’s The Catcher in the Rye, not wondering what happens to the ducks in winter, but thinking about how to find Watts’ houseboat.

I had a vision that I should find the houseboat, start a foundation to renovate the houseboat into a 60s style museum of Zen, Beats, LSD, Esalen, and Eastern Religion, and float the houseboat/museum to each of the cities of the San Francisco Bay so that the youth of the Bay Area could learn in a floating museum. The museum could dock, say, in Oakland for a month, and each day different schoolchildren would come by bus to view the museum, learn to write haikus, and immerse themselves the literary and social culture of the 50s and 60s.

By the time I arrived home, the paper was well-written in my head. I typed a draft and sent it to the late Dr. Eugene Taylor, Saybrook professor and existential-humanistic historian, for comments. His only remark was that the title was too long—it would never pass APA format. I had only wanted direction, but he approved the draft. And I had credit for the course! And furthermore, he recommended that I submit the paper to the Alan Watts Foundation, which I did and won their prize.

After submitting the paper and before Dr. Taylor’s response, I thought I should really determine where Watts’ houseboat might be located in the mud in Sausalito. Using Google, I learned that it was a former ferryboat called the Vallejo, and had, in fact, been renovated and restored to how it looked when Watts and a Greek artist, Jean Varda, shared it in the 60s.

I contacted a woman who was researching Jean Varda, and she agreed to help me arrange to see the houseboat. A friend of mine, Rick Umbaugh, also enrolled in the Watts course was writing a play about Watts and had met Watts’ daughter, Anne.

At the next Saybrook colloquium, Rick and I arranged a party on the Vallejo for Saybrook faculty. Eugene Taylor, Tom Greening, David Lukoff and Jeanne Achterberg, along with my colleague Rick, Anne Watts, my sister Ruth and myself all partied down on Watts’ houseboat, watched videos of Watts in action, and sat on Watts’ bed, with his daughter Anne. The houseboat was indeed a Watts museum, restored just as it had been in the late 60s, when Eugene Taylor was living in Larkspur and was the house drummer for a club on a different houseboat in Sausalito. And I, just out of college, lived in the next community, Corte Madera, and would hitchhike daily through Sausalito and pass this very houseboat. Back then, Taylor and I were both totally unaware of the history that was unfolding there, or that both of us, one day, would be promoting existential-humanistic psychology on that houseboat of Alan Watts, one of the founders of the existential-humanistic movement and Saybrook University!

Today’s guest contributor, Roger Cunningham, attended Saybrook University, is an adjunct at Bronx Community College (CUNY) and teaches Credentialed Alcohol and Substance Abuse Counsellor courses at NarcoFreedom in the Bronx. He runs a weekly Dream Table at BCC and a monthly Dream Table from his apartment. He is a co-founder of Encompass New Opera Theatre.