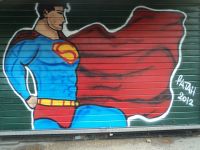 The Amazing Spiderman sequel. Guardians of the Galaxy. Captain America, Winter Soldier. This summer will be replete with superhero movies on the big screen. Sales of books, cartoons and videos, action figures and other toys, continues apace.

What is it about the superhero that enthralls us?

In some ways, superheroes keep pace with the times. Superman started as fairly modest. He grew up on a planet with high gravity, and therefore was very strong on Earth. He could jump high, fight, flip over cars. As the world became more and more globalized, his enemies grew in stature. In the beginning, he brought cats down from trees and beat up robbers. Later, he thrashed mob bosses and union busters. While he took no part in World War II, he did learn to fly, gained heat-ray vision and eventually became strong enough to lift continents.

In the Brandon Routh iteration, he floated above the Earth listening to millions of human voices crying out for some resolution to their troubles, effectively godlike.

The thing is, we need a Superman right now. Our problems are outstripping not only our ability to fix them but also our ability to know them. Climate change is happening now. The natives of Kiribati are out looking for a new home as their low-lying Pacific islands are sinking under the rising seas. Venice is under several inches of water now each summer for some 100 days. Worse, these changes are escalating, with the most pessimistic views of the data proven right every year. Now we know the Antarctic ice shelf is melting and breaking apart, as is Greenland—potentially surpassing the most pessimistic estimates of ocean raise by a large margin.

Worst still, human activity is responsible for more than climate change. Perhaps the most depressing fact ever reported: saltwater fish are expected to be extinct by 2048. https://www.cbsnews.com/news/salt-water-fish-extinction-seen-by-2048/ Not unless we change our ways, but in most likely any event. Too many tipping points are past at this time.

Where is Superman now? What is it about us that we can turn away from these big issues and wait for some great hero to fix them? This summer, millions of people will go to the theaters to watch imaginary folks solve imaginary problems. If Godzilla is not an allegory for climate change and pollution, I don’t know what is. And essentially nobody will take any action.

There isn’t a Superman. There is only us. What can we do?

But there is a Lex Luther. Several of them, in fact. Oil companies lobby not just the government but also the citizens to vote their way, and the Koch Brothers could not do more to escalate climate change and pollution if they were actually scheming to destroy the Earth.

Unfortunately, as Jung might have observed, the superhero narrative is archetypal. And Yalom wrote pages and pages about the need for us to join with some admired other, give up our power to them so we can avoid the uncomfortable feeling of responsibility, even if it means ditching freedom. We are also stuck with an inability to digest data because of an evolutionary bias towards experiential and anecdotal evidence. The stories the Kochs tell us in their political advertising resonate much more strongly than the data in the journals.

So we rest in the theater and eat popcorn, watching crises resolved by a few great men.