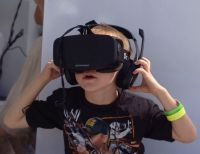 A boy wearing the Oculus Rift.

Facebook recently announced its acquisition of Oculus (Associated Press, 2014), a company that has been making waves for developing immersive hardware for virtual reality technology. As Facebook CEO Mark Zuckerberg said, the benefits of virtual reality stretch far beyond video games, and could “someday be used to enjoy a courtside seat at a basketball game, study in a classroom, consult with a doctor face-to-face or shop in a virtual store” (Associated Press, 2014).

The potential for such a product is immensely vast. Reports about the Oculus technology reflect a fully real sensation of a virtual experience. The system currently being developed, the Oculus Rift, is built so that rather than simply watching a film play out before your eyes, the system recognizes movement and orientation so that turning your head causes your virtual perception to also turn with the same quantity of movement and the same shift in orientation within the virtual environment. “The next thing I knew, I felt as if I was going up the elevator and looking out to the snow-capped mountains. There’s a fan in the booth that makes it feel as if the wind is blowing. I am afraid of heights and I started to tremble as I gazed out across the landscape” (Sydell, 2014, March 16, emphasis added). The immersion of the virtual is so vivid that it appears to manipulate the brain in the same way the actual experience might. Though the virtual experience is unable to send signals to the brain that mimic the sensation of a breeze across your brow or the physical feeling a of a virtual object’s surface, can such technology be far off?

If virtual reality technology is able to so fully fool the brain, then the very nature of reality and our own ability to perceive the world around us are called into question: if we are able to vividly experience something unreal, how are we able to tell what is real? Unfortunately, our perception of what is real is flawed by what Husserl describes as the “natural attitude”—that “the “world” is tacitly accepted as “real,” as having its “being” out there, and as being reliable enough for all ordinary pursuits” (Natanson, 1973/1996, p. 20). This natural attitude is the bias of assumption that the world as experienced is fully objective—that one person’s experience of a phenomenon will be the same as another person’s. However, we know that this true objectivity is not the case in practice: not everyone experiences the grass as green because some people have a green color vision deficiency and might experience the grass as brown, or an individual from an arid environment might call the grass green, while one from a more lush environment might say that same grass is dying.

Instead, we must give up our assumptions of objectivity and admit that there are other factors involved in experiencing the world. Experiences are built from perceptions of the world, and our perceptions are informed by our intentional consciousness. “For the phenomenologist, the phenomena strictly understood are purely intentional in nature…Put somewhat differently, phenomena are meant, not simply acknowledged in perception” (Natanson, 1973/1996, p. 13, emphasis in original). Rather than simply being aware that the grass is green, we are purposefully noticing the reality of the grass. The woman from Texas goes outside and says that the grass is green because it has finally rained and she is glad of the new growth. The man from Maine sees the Texas grass and can’t possibly consider it new growth, because compared to what he is used to—it is patchy, sparse, and still browning in some places.

When we consider our awareness of reality in relation to consciousness of virtual reality, the experiences appear the same. As Sydell (2014) noted when she tried the Oculus Rift system, though she could not physically feel the snow or ice, or feel the pull of gravity as the virtual elevator lifted her, the scene and its portrayal to her senses looked real. There is no mental space with which to stop and remember that the scene is virtual. Suspension of disbelief is a practice that is much closer at hand when the unreal unfolds before you in the same way as the real.

The sensor and the sensible do not stand in relation to each other as two mutually external terms, and sensation is not an invasion of the sensor by the sensible. It is my gaze which subtends colour, and the movement of my hand which subtends the object’s form, or rather my gaze pairs off with colour, and my hand with hardness and softness, and in this transaction between the subject of sensation and the sensible it cannot be held that one acts while the other suffers the action, or that one confers significance on the other. (Merleau-Ponty, 1945/2005, p. 248)

The tension between our own perceptions and the world around us are so vitally intertwined that the cycle of intentionality between our subjective minds and the objective world are immediate. By putting on the Oculus Rift, thereby seeing a landscape instead of a living room, we are consciously interacting with this foreign experience as a reality that requires our attention.

Because virtual reality has the potential for the same kind of conscious experience as everyday reality, technology such as the Oculus Rift could very well lead to new and profound ways to approach therapy. For example, the use of virtual experiences through video games has already been gaining in popularity as a method of exposure therapy for veterans diagnosed with PTSD (Gonçalves, Pedrozo, Coutinho, Figueira, & Ventura, 2012; Nelson, 2013). Beyond the treatment of symptoms, Oculus could also provide significant assistance for life coaching and developing important life skills such as coping. At the South by Southwest Gaming Expo, video game developers already noted that the interactive method of narrative style within games could very well be used for nurturing skill development and provide practical education (Watsham, Pearson, Hoberman, & Bui, 2014). With the assistance of Oculus to provide a fully immersive, first-person narrative, and with the potential guidance of a mental health professional, it could very well be that virtual gameplay could serve as a nurturing safe environment with which to approach difficult life experiences.

Merleau-Ponty (1945/2005) said, “All knowledge takes its place within the horizons opened up by perception” (p. 241). Our perceptions of the world are a primary facilitating factor for our experience within a world around us. Our consciousness of and interaction with a reality presents a basis on which we effect meaningful change in that world around us and within ourselves. The development and proliferation of virtual reality technology is incredibly important for the field of psychology. The Oculus Rift has the potential to open new worlds of human experience, and it is vital to recognize the many doors this tool has the ability to open, both virtually and psychologically.