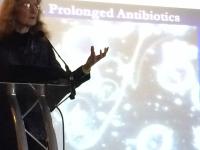 The Weston A. Price Foundation held a European Conference from the 8th to 9th of February 2014 at Esher in Surrey, United Kingdom. This event was accredited by The Naturopathic Nutrition Association*, the Federation of Nutritional Therapy Practitioners (FNTP), and the British Association of Applied Nutrition and Nutritional Therapy (BANT). This two day conference had a range of speakers from all over the world; from Kings College London to Saybrook University.   School of Mind-Body Medicine doctoral student Yasmin Headley attended the conference, and reports here on a presentation by Saybrook University instructor Beverly Rubik.

Beverly Rubik, PhD, earned her Ph.D. in biophysics in 1979 at the University of California at Berkeley.  She is internationally renowned for her pioneering research in frontier science and energy medicine. Her main focus is research on the subtle energetics of living systems, including the human energy field, energy medicine devices, and whole-person health and healing.  She has published over 100 papers and two books.  Dr. Rubik presently serves on the editorial boards of Journal of Alternative and Complementary Medicine; Evidence-Based Integrative Medicine; and Integrative Medicine Insights. Dr. Rubik was a member of the Program Advisory Board to the Office of Alternative Medicine at the US National Institutes of Health (NIH) from 1992-1997, and chaired the NIH panels on bioelectromagnetic medicine and energy healing.  This was a precursor to the National Center for Complementary and Alternative Medicine (NCCAM).

In 1996, Dr. Rubik founded the Institute for Frontier Science (IFS), a non-profit corporation for research and education.  She has received NIH grants and foundation funding to support her research on energy healing, diet and nutrition, and water.  She teaches in Integrative Health Studies at the California Institute of Integral Studies and in the School of Mind-Body Medicine at Saybrook University, both of which are in San Francisco, and also at Energy Medicine University, in Sausalito, CA.

Beverly Rubik has won several awards for her pioneering research, including the Integrity in Science award from the Weston A. Price Foundation.  She serves as a consultant in the health care industry on maverick health and wellness products and as an integrative health advisor to clients.  Dr. Beverly Rubik is also a practicing Integrative Health Practitioner.

Dr. Rubik has carried out a number of studies on human blood using dark-field microscopy to investigate the effects of diet and also lifestyle. In her presentation at Surrey, Dr. Rubik showed compelling evidence in micro-photographs of freshly drawn live blood that revealed major differences in red blood cell aggregates and clotting factors in those consuming a natural whole foods diet compared to those consuming the standard modern diet.

This presentation also showed some individual cases of how blood is altered at the microscopic level by what we consume. For example, the blood of a female subject who consumed mostly carbonated sugary sodas as her main beverage for over 30 years showed numerous microbial forms and irregularly shaped red blood cells.

There were 16 participants in the study in two groups matched by age. Eight participants consumed the Weston A. Price diet, and eight consumed a conventional organic diet (that included processed foods) for two years prior to testing. There was also an allowance given for persons in the Price group to consume up to 10% of their diet in restaurants.

Dr. Rubik showed, through blood micro-photography, that the consumption of the Weston A. Price Foundation diet was better than a mainstream organic diet, as their blood showed reduced clotting factors indicating reduced systemic inflammation. Those on the Weston A. Price Foundation diet had far healthier blood with well-formed, free-floating red blood cells, white blood cells that were motile, and a cleaner plasma, indicating a better “biological terrain.”  The biological terrain is the “soil” of the body in which all of the cells live, which is one holistic indicator of overall wellness.

Dr. Rubik also talked about an additional study she conducted in which she found that consumption of un-marinated fresh pork caused a high amount of early clotting in the blood, although cured pork products such as bacon and ham did not.  She concluded there may be a sound nutritional basis for certain religious proscriptions against pork.

In the second part of her talk, Dr Rubik discussed the effects of lifestyle on the blood including chronic stress, which also produces the same systemic inflammation implicated in chronic disease. She also showed how long-term antibiotic usage affects the blood.   She discussed how to deal with lifestyle choices on a daily basis to improve one’s health.

Rubik also talked about the benefits of drinking “good water” — water that is filtered, alkaline, and ionized. On testing, alkaline ionized water has substantially better effects on the blood than water drawn straight from the tap or bottled. She described bottled water as “dead,” having low vitality, and potentially containing plasticizers, chemicals implicated in causing cancer.  As we get older we tend to feel less thirsty so we may not be drinking enough water. It is important to keep up our daily intake of water, she said, especially early in the morning, between meals, and after exercise.

There was a large audience in the main room for Dr. Rubik’s presentation, which was received with interest and enthusiasm. The program went into overtime with numerous  questions from the audience, and Dr. Rubik stayed on to talk further with those who remained.