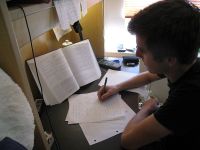 We call them “helicopter parents,” “tiger moms,” “hoverers,” … we say they’re over-involved.  But for modern parents of means, the impulse to do anything to protect and advance their children is irresistible.  And … come on … who can’t sympathize with that?

The result, however, has been a seismic shift in the acceptable handling of children:  they have gone from being seen as resilient enough to work in fields and factories to fragile enough that not getting a soccer trophy could permanently damage their self-esteem.  It has become acceptable to medicate them at the first sign of a potential condition, no matter how loosely defined or poorly understood:  “drug first and ask questions later” may well be the motto.  We test them like crazy … I mean “crazy” in a very literal sense … in order to ferret out their smallest aptitude while predicting the rest of their lives.

We sure don’t let them run with scissors.

It’s interesting to note just how much this overlaps with the way we’ve come to treat adults, and it’s interesting to ask whether the emergence of this view of how to treat children led the changes in how we view adults, or vice versa … or if they evolved separately and without connection.

But we should come to one clear conclusion about the helicopter and tiger styles of parenting:  for the majority of kids subjected to them, it’s been a colossal failure.

The antidote may be a dose of existentialism.

That, at least, is the conclusion I reach after reading an article in Slate by clinical psychologist and family therapist Dan Griffin.

Learning to fail, Griffin says, and then what to do after failure, may be the most vital lessons kids can get – and getting that experience can cause lifelong damage.

The key,” he writes, “is figuring out how to get kids to tune into their own motivation to get their work done, and to get the parents to tune out of their motivation to shield their kids from failure and disappointment.”

Kids for whom intrinsic motivation is a stranger are kids who are not adequately prepared for life.  The ability to learn to make meaning out of one’s struggles – and then to make personally meaningful choices about them – is simply not replaceable by testing, support, or pharmaceuticals.  These may (or may not) be solutions to other problems, but the giant experiment on childhood development that our modern culture of afluenza has unwittingly provided has made it clear:  people who do not develop the capacity to make their own meaning out of their lives, and then make meaningful choices about their lives, do not develop.

Should we be surprised?  If this sounds like a rediscovering of what we’ve long known, I can’t say I blame you.  But for a culture entranced by quick fixes, it does qualify as a discovery.

The other side of this coin may be that a new review of existing research on kids diagnosed with ADHD shows that there are no long term academic improvements to kids taking Adderal … while those kids are instead more likely to be dropping out of school.

Studies indicate that the improvements seen with medication do not translate into better academic achievement or even social adjustment in the long term: people who were medicated as children show no improvements in antisocial behaviour, substance abuse or arrest rates later in life, for example. And one recent study suggested that the medications could even harm some children.

After decades of study, it has become clear that the drugs are not as transformative as their marketers would have parents believe. “I don’t know of any evidence that’s consistent that shows that there’s any long-term benefit of taking the medication,” says James Swanson, a psychologist at the University of California, Irvine.

“Now,” Nature adds, “researchers are trying to understand why.”

But in fact the distinction couldn’t be more black and white:  kids who are given opportunities to deal with their own failures and find their own intrinsic motivations are better prepared to succeed … while kids who are drugged to keep them attentive – that is to say whose choices are to some extent literally medicated away – are in fact more likely to fail.

As an article in the Atlantic notes:

“(P)arents’ and teachers’ inclinations to mistake manageability for academic improvement could actually be exacerbating children’s academic problems. A recently published long-term study of ADHD medication in Quebec found that, despite consistent Ritalin dosages, there was “little overall improvement in outcomes” in the short term—and in the long term, more of these kids dropped out of school and reported unhappiness.

“By making children less disruptive, ADHD medication could decrease the attention that they receive in the average classroom and reduce the probability that the child receives other needed services,” wrote the study’s authors.

And really, what is the condition of a child of affluenza, whose parents argue with teachers, hire the best legal defense teams, and bribe bribe bribe any problems away, but that of never learning how to take agency in his own life?

All of human history and literature suggests that this is a terrible idea.  It turns out to be correct.

What’s true for children is true for adults as well.  The approach taken by modern psychiatry and psychopharmacology is to ignore the idea that life is something to be grappled with, and focus instead on ways to avoid exploring one’s own mind and condition.  But that is not healthy, and it will never be healthy.

It is a search for meaning and consequences, and there is no substitute.

Benjamin Wachs archives his writing at TheWachsGallery.com, and is the author of “A Guide to Bars and Nightlife in the Sacred City.”