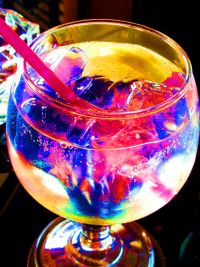 Recently, I was at yet another Chinese Banquet and faced the pressure once again to drink and be merry. Except, I was not very merry. People kept asking me why I don’t drink, and I gave my usual response, which was that I haven’t developed a taste for alcohol. If I insist upon this answer, my hosts will thankfully usually relent, and I’m left feeling a bit awkward and guilty for being a bit of a party-pooper for others will not drink nor really fully throw themselves into their drinking if the guest of honor does not participate.

As I’m told, it is no fun to drink alone, and I can certainly appreciate this for food tastes better and the entire process of eating becomes more enjoyable if I’m with a foodie who is uninhibited in his or her enjoyment of food. And yet, in my observation, more so than food, the culture surrounding alcohol requires much more solidarity. Perhaps it is because we all have to eat, and usually eat multiple times a day for survival, whereas drinking is nonessential. Nevertheless, all of this has caused me to reflect further upon my strong and often unpopular stance of being a non-drinker.

There are a multitude of reasons why I choose to be a non-drinker. It began with being turned off to alcohol during my adolescence when I observed people turning into insensitive degenerates after becoming drunk. Yet, on a deeper level, I also sensed that oftentimes, my peers drank because that is what one did if one wanted to be cool and enter or remain in the popular crowd. This was one form of “solidarity” that I did not care for, particularly for what it turned a number of people into (louts) when they drank too much. So that was the beginning of my solitary existence for choosing not to be cool.

Then, as I begin studying and practicing psychology, I began to observe how many hurtful things resulted from drinking too much. This involved unwanted pregnancies and rape when I worked with university students. Then there were the stories of abuse that my clients reported at the hands of drunken parents. There were also victims of drunk drivers. It made me think that much of the pain of this world would disappear or be lessened if there were no alcohol in the world.

Yet, as I matured and softened more in some of my stances, others began to teach me more about the lubricating effects of alcohol, in addition to being an anesthetic. I remember a friend telling me that the best memories she had of her grandmother were related to alcohol. Her grandmother was much more affectionate and fun when she had a few drinks. At the same time, I also saw how alcohol brought people together and helped strangers to bond. I saw more initial connections made with the aid of alcohol as a lubricant. I also began to learn more about the culture surrounding alcohol—not just the culture of social peer pressure, but also the culture of respect and communication that surrounds alcohol.

I realized that my views were one-sided, and that the alcohol, like many other things was indeed a paradox. I began to appreciate alcohol as both a lubricant and anesthetic. I saw that alcohol involved both solidarity and solitary existence. That as a lubricant, it can help to bring about more authenticity, or as an anesthetic, it can numb one against one’s authentic self. It is also interesting to me that the hard liquor consumed here in China looks like plain water—so innocent and innocuous and yet so fiery and potentially destructive.

In the end, I suppose, like food, fire, religion, etc., alcohol, in itself, is just what it is. What is most important is the meaning we give to it and how we use it. After all, my own love and appreciation for good is also part of my own addiction. In the end, we all have to take some sort of stance towards these things that nurture, sustain, and destroy. As for me, I still choose to remain a non-drinker who will occasionally take a sip to show appreciation for the honor bestowed upon me AND to ease the social and peer pressure that comes with it. In doing this, I strive to remain mindful of not losing my authenticity in order to conform to some excessive practices that begin to erode the self.