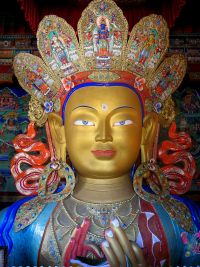 Recently I returned from a trip to China where I was asked to speak at a conference entitled “Buddha from the Heart: Humanistic Psychology Maitreya Culture.” Maitreya Buddhism is a lesser-known school of Buddhist thought originating in China, particularly connected with Maitreya Buddha (i.e., future Buddha). The focus of the conference was on ways in which humanistic psychology and Buddhism, particularly Maitreya Buddhism, can help the people of China. It was an exciting opportunity to dialogue about convergences between existential-humanistic psychology and Buddhism, particularly related to how they each can positively impact the world.

Context: Religion and Psychology
It is important to discuss this with a disclaimer. Neither the conference nor this blog are suggesting that existential-humanistic psychology is a Buddhist psychology. When talking about religions and psychology, it is important that we do not reduce one to the other. Also, while there may be a place for religious psychologies, I believe that it is vitally important that existential and humanistic psychology remain unattached to religion at the foundational level in order to work with clients from their own religious or spiritual framework instead of imposing our own.

At the same time, it is interesting that existential-humanistic psychology often appears to share a great deal with the spiritual and religious wisdom traditions. With Buddhism, there certainly are a number of interesting convergences.

Both value mindful awareness. I have, at times, been frustrated with the mindfulness craze in psychology. It’s not that I do not value what it has to offer, but rather that I think it is a distortion to think of this as something new. Existential psychology and other depth psychologies long have advocated for approaches quite similar to mindfulness long before mindfulness entered the psychology lexicon. Additionally, I also have some concern that mindfulness, as it originated in Buddhism, is quite different than the mindfulness that is often integrated into psychology today, particularly in the West. Despite these challenges, both existential psychology and Buddhism believe there is a value in a nonjudgmental or inquisitive awareness of one’s cognitive, emotional, and bodily experiences.

Last, both Buddhism and existential-humanistic psychology are growth oriented and recognize human potential. Although there are many variations across the different approaches to Buddhism, there is rather consistent growth-oriented focus in which individuals, through self-development, attempt to continually grow and embrace their Buddha nature. Similarly, existential-humanistic psychology advocates toward helping individuals achieve their potential rather than focusing solely on overcoming problems.