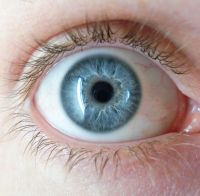 “The eyes are the window to your soul.”

Variations of this quote have been attributed to Shakespeare, Cicero, and Matthew in the New Testament. But no matter who said it first, this quote has found its way into common parlance, and has almost become a cliché, at least as far as barroom pick-up lines are concerned.

But we perceive and indeed communicate so much of our world through our eyes that psychology researchers are now using both high- and low-tech methods to see what the eyes can tell us.

Back in 2007, when high-tech was really all the rage, researchers at Orebro University in Sweden discovered that patterns in the iris of the eye—the part that displays the color—can give an indication of personality traits. These researchers studied the eyes of 428 participants, looking specifically at the patterns in the crypts, or the threads that radiate from the pupil, as well as the contraction furrows, which are the lines that curve around the outer edge when the pupils dilate.

But do we really get close enough to see the lines in people’s irises on a daily basis to gauge this kind of information? Usually not.

That may be one reason I was inextricably drawn to a quiz appearing recently in the online edition of The New York Times asking participants to measure how well we are in tune with people’s emotions simply by looking at pictures of their eyes and choosing from one of four emotions below.

The quiz, The New York Times said, was based on a recent study showing that people did better on tests that measured empathy, emotional intelligence, and social perception after reading literary fiction, as opposed to any reading other types of fiction or nonfiction.

The reason for this is according to the researchers is that “literary fiction often leaves more to the imagination, encouraging readers to make inferences about characters and be sensitive to emotional nuance and complexity” (Belluck, 2013).

For the literary nonfiction, the researchers chose examples from authors including Don DeLillo and Wendell Berry. For the popular fiction, participants read Rosamunde Pilcher romances, Gillan Flynn bestsellers, or Robert Henlein science fiction. As for the nonfiction, the researchers opted for maximum contrast in some experiments, choosing some articles from Smithsonian magazine that had nothing to do with humans at all—one about “How the Potato Changed the World” and another entitled “Bamboo Steps Up.”

Belluck (2013) described the experiment that The New York Times attempted to replicate:

After reading—or in some cases reading nothing—the participants took computerized tests that measure people’s ability to decode emotions or predict a person’s expectations or beliefs in a particular scenario. In one test, called “Reading the Mind in the Eyes,” subjects did just that: they studied 36 photographs of pairs of eyes and chose which of four adjectives best described the emotion each showed.

After taking the test, I found two aspects most interesting. First, that in the ones I got wrong, I found I often got tripped up by the subtlety of the choices—for instance (and I am choosing these arbitrarily, as I don’t remember if these were problematic for me when I did actually take the test) “impatient” vs. “irritated” or “alarmed” vs. “anxious.” I find these emotional “labels” very subtle and open to interpretation.

Second, especially when taking the first point into consideration, I found it hard to distinguish these real subtleties without the rest of the facial gesture—the mouth, the full nose, the full brow—let alone the full posture of the body.

The eyes, however, do have a story to tell, and we need to learn to attune ourselves to those stories—not to jump to conclusions and assume we know the full story without asking questions or confirming our impressions—in order to really begin to start knowing that person sitting across from us in the consulting room. Or sitting in desks in front of us. Or eating across from us at the breakfast table. Or sleeping on the next pillow.

Those eyes have a story to tell. Listen.