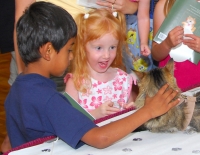 My six-year-old son got his first pedicure this last weekend. He was with three women at the nail shop, and initially, he decided against the pedicure but quickly grew bored with his video game and elected to join us.

He chose blue for his nail color. Since then, he’s scarcely noticed the color and hasn’t even mentioned it but I am acutely aware of them. I am on guard at the playground, in the store, or when we’re out riding bikes because I am aware of how out-of-the-gender-specific norm this is. I’ve heard the horror stories of complete strangers verbally and even physically accosting young children who challenge gender roles and I’m mentally prepared to go to the mat for my child if necessary. I hope it doesn’t come to that.

I am not mostly concerned not about his gender expression or sexuality. I am not concerned about whether he will become effeminate because I allow him to paint his toenails. I am most concerned that his innocent self-expression will serve as an unwanted invitation for someone to shame him and cause his still-developing sense of self to wither and hide.

Brene Brown, who has researched the issue of vulnerability, discusses how men and women experience shame differently, and how much of the shame we carry is based on gender stereotypes (or straightjackets, as she calls them). Boys are conditioned that they ought not be weak, wrong, soft, fearful and ought to not fail. Brown (2012) describes a scenario of a young man who as a boy loved art but was chastised by an uncle as being a “faggot,” and since then, has not engaged with his art again. I wonder how much this world is missing because of those who were shamed away from something they love.

One theme I’ve seen consistently pop up in my therapy room over the years is fear of self-expression. People are shamed in some way as young people, and that experience causes them to pull back into their shell of self-protection, fearful of experiencing that wounding again. As they get older, they realize there is something in them that has been shut off and they come to therapy to uncover what that might be. Many times, I’ve worked with clients who stopped doing something they loved but re-engage with that passion during therapy. The journey back to self is often more of an archaeological expedition wherein we uncover what has been buried.

So to my son, I say: paint your toenails if you choose to do so. You are so much more than a gender construct, and I will do my best to help you express yourself, in whatever way possible. In those times that I fail, please be patient with me as I am growing with you.

To those who balk at the idea of a boy with painted toenails: Look up past his toes and see the boy standing before you. This is a young one who is learning his way around this scary place called life. Please don’t judge him, shame him or make fun of him. Get to know him, and I’m pretty sure you’d like him. Your words can have impact long after you speak them, so please be careful with what you say.

And to each of us who have pieces of us that are still unexpressed? Well, let us all take a lesson from a brave little boy and let ourselves shine a little more each day.