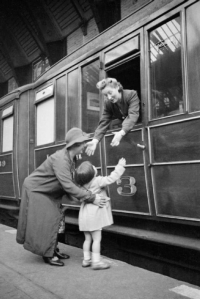 It’s only been minutes since I read the post of a long-time friend giving birth to her newborn—a story written by her husband of his 43-year-old wife’s home birth. It’s another painful reminder of how some women never get the privilege of this experience, including myself.

On the contrary, having been involved as a foster parent for several years, I’m also reminded how thousands of mothers lose their children to the foster system. It’s no secret that I am not a current fan of the foster care system, at least in my county. I am not alone, as there have been recent allegations against the system and mandates for reform. I often find myself floundering between idealism and realism, doubting whether this broken system can actually heal.

According to the U.S. Department of Health and Human Services, The National Family Preservation Act, founded in 1992, was created to serve as the primary national voice for the preservation of families through Intensive Family Preservation and Reunification Services (IFPS and IFRS), and a myriad of state programs. It is then that foster care system appeared to swing from allegedly over-placing children in foster homes and orphanages as in earlier days, to developing substance abuse and other programs to ensure children remain with their biological parents whenever possible.

The question is, at what expense? Many people believe that some of these children are placed in harm’s way when they are returned to their biological parents prematurely. Furthermore, some of these mothers have given birth to multiple drug-addicted children, and still uphold their parental rights. Where do we draw the line? From an existentialist perspective, who should we let decide whether children are really better off with their biological parents?

I believe that parenting is not a birthright. It is a privilege. A sacred service, if you will. One could argue that if foster parents are “doing it for the right reason,” they should support the children returning to their biological parents. The system demands that these foster parents fundamentally believe in the parents’ recovery. We should want what is “best” for these children. Again, my question remains, what is best? Perhaps this inability for some foster parents to rejoice when these parents are reunited with their birthparents derives from the inevitable bond that develops as soon as a child is in their home, and the subsequent pain when they leave.

The foster parents I know who have had multiple foster children, most of them for a short time, appear to have a unique talent and gift of unconditional love and selflessness. They appear to be under-exalted, these angels of society. Perhaps Thomas Reynolds, the father of a son with a severe disability, touches on this innate quality I was referring to:

Genuine love signifies being summoned into a relational space of giving that happens outside the order of predetermined calculations and expectations, beyond the boundaries of “tit-for-tat’’ systems of exchange, beyond universal concepts of right and obligation. This is what makes love so difficult, indeed traumatic: Its gesture of giving hinges around letting go of those things by which we domesticate and manage reality so as to feel ourselves secure and in control.” (Reynolds, 2005)

Foster parenting requires a degree of detachment, from the outcome of the placement, which inevitably means the system. It seems these “kind” of foster parents, remained somewhat unscathed when the child is returned to their biological parents. They are not playing “tit-for-tat” with the biological parents. It is simply an act of love for these children, albeit only temporary.

Today’s guest contributor, Alisa Huntington, PhD, is a graduate of Saybrook University and a Marriage and Family Therapist in Palm Springs, CA, specializing in adolescents, LGBT, and adoption-related issues. She is also a foster parent and foster parent advocate for Riverside County.