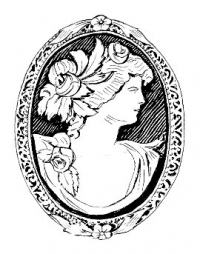 Six years ago I was in a taxi with my father in Istanbul, Turkey driving to a cemetery. During the two previous trips I had taken to Turkey with him, I did not accompany him on this part of the journey. He would go, and my sister and I would continue our sightseeing or family visits for a few hours without him. We never knew about this pilgrimage he made, or the life he had before us until we were both teenagers. Apparently then, it was deemed the right time to tell us.

It was the saddest story I had ever heard. They lived in Istanbul. My father was working at the bank at that time. They were married. She got pregnant. She died giving birth to their son. The baby died as well. My father lived with this tragedy in his heart every day. I couldn’t fathom it. I didn’t know what to say or do for him. I tried to imagine what it might have been like for him at that time, and for everyone.

And I tried to imagine who she might have been, what she looked like, what their life may have been like. I had never seen a photo of her or heard anything about her, even after hearing the story that had been hidden from us for all those years. So much more remained concealed. We were either fearful or respectful, perhaps both, and never asked for more information than was given to us.

Years passed, and another trip was planned. Those first two times we went to Turkey with my father, there was no discussion about going to the cemetery. He just went. But on this trip, it was different. I was an adult, traveling with my husband and son. The day my father was to go visit his deceased wife and son, I told him I was going with him. There was no discussion. We both got into the taxi.

The cemetery was large, with many of the gravesites covered over with brambles and weeds. My father, then in his early 80’s, had some idea of where to go, but was slow to orient himself. I began the search. Her name was Guzin. Pointed in what we thought was the right direction, I started brushing back the heavy growth to read the names on the marbled white stones. My father was further behind, having just spoken to one of the caretakers. I felt compelled to find her. Guzin, buried with her baby. Guzin, my father’s wife. Guzin, my father’s tragedy.

I walked a little further up the hill, and I found her. I found them. At that moment, I called to my father. While he was making his way to meet me, I stood in front of them. A deep realization came to me: I would not exist if she hadn’t died. It was the most pure existential moment I have ever had. My father joined me, and I took his arm. We stood there for what felt like an eternity. I don’t remember what I said, but it doesn’t matter. I was with him. I was able to finally share this space of grief with him. I know my father doesn’t remember that day, but I will never forget it. I made a promise to Guzin that day to live my life fully.

For the past year, my father has been living in an assisted living facility not far from the apartment that he has owned and lived in for the last 35 years. He is 89 and has vascular dementia. For more on this, please see my blog post. Last month, I was in New York visiting him and continuing the immense task of going through the 35 years worth of accumulation in his apartment. We’re talking bank statements from the 80’s, leisure suits from the 70’s, and eyeglasses from the 60’s. It was agonizing deciding what to keep and what to let go. I kept one leisure suit and all the glasses, by the way.

The ambiguous loss that I wrote about last year flared up again in a slightly different way. Going through a parent’s lifetime of belongings is not supposed to happen when they are still living. I wasn’t sure I was doing the right things, or making the right decisions. It was overwhelming.

Deep in a box of papers, I found my high school diploma, the cutest photo of my sister when she was little girl that I have ever seen, a faded crayon drawing of a “good Halloween witch” that I had drawn when I was 5, and a bulging manila envelope that was sealed with yellowing tape.

I opened the envelope and pulled out a bunch of black and white photos, a stack of letters written in sepia ink, a small coin purse, and three tiny diaries. First, the photos. I gasped. There was my father, a handsome young man sitting with a beautiful young woman. Guzin. Many more photos of my father with his wife followed: their wedding day, posing for the camera with friends, Guzin with my grandmother. Finally, I could see some of their life together. I could see how lovely she was, and how happy they seemed to be. In the coin purse were their wedding bands, simple and gold, and inscribed with their names and wedding date. The letters, all in Turkish of course—I may translate someday. I opened the tiny diaries and wondered about the entries she made on all those days in 1951. There is one page in English. Part of the lyrics to As Time Goes By were carefully written out:

You must remember this
A kiss is just a kiss,
a sigh is just a sigh.
The fundamental things apply
As time goes by.
And when two lovers woo
They still say, “I love you.”
On that you can rely
No matter what the future brings
As time goes by.

So there I was, alone in my father’s apartment, piecing together a part of his life, while letting go of others. I wept. And that feeling came over me again, like it did when I was standing in front of her grave. I exist because she does not. I am living my life, because hers ended. And now I am seeing how she used to be, and I am so deeply touched. Hoşgeldiniz, Guzin. Welcome, Guzin. Welcome to my heart and mind. Welcome to my life. Let me hold you here, while so much is fading away.