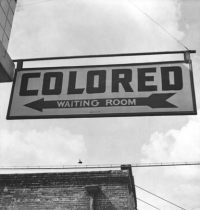 Lately, whenever the topic of race and racism comes up, someone from the Ayn Rand, personal responsibility set pipes up, “Yes, but things are better now for the Black man than they have ever been. Everyone has the same opportunity, and we can all make of our lives what we want, if only we stop blaming each other and work hard.”

I have already taken on this myth once and won’t go into much detail about it. Suffice it to say that your parents’ lifetime wealth strongly predicts your lifetime wealth, and their education status predicts yours. Hard work cannot get you out of the ‘hood or the ghetto. Moreover, if there are opportunities, they tend to be invisible, undreamed of by people who struggle from day to day to meet their basic needs. Your dreams might be of an athletic scholarship—because school is for white kids, and the school you go to reinforces that point every day. Poor schools with poor teachers, graduation rates in the toilet, and battlefield mentalities produce students whose best option is to drop out, or learn to play basketball, or mix music. And for every kid who makes it out into the NBA, ten thousand are never drafted. For every kid with a recording contract, ten thousand live in obscurity.

Social mobility has not been lower in our country in many decades. The wealth level into which you are born is the one, in most cases, in which you will die. Out of 12 countries measured, the United States is tenth, even according to Forbes magazine. This article, though, fails to mention how many countries were measured, and how few fell behind us in social mobility—Forbes is a well-known bastion of bootstrap-mentality people.

Poverty is endemic to many Black communities in the United States. And if you are born poor, it is almost guaranteed you are going to stay that way. There are no bootstraps to pull yourself up by. You can’t borrow $20,000 from your parents and open a business, and even if you could, nobody in your neighborhood can afford to buy anything from you, and most small businesses fail in any case.

Personal responsibility has another problem. The fundamental attribution error is our tendency to judge others’ actions as based on their traits but our own as circumstantial (this latter half being called self-serving bias). So, you fail a test, and I think you are stupid, lazy, or didn’t study. I fail a test, and I think the test was too hard or I didn’t have coffee this morning.

The statistics for over-representation of Blacks and others of color in our prison system tell a grave story, and I interpreted this before, too. The thing is, we can look at all these Black men in prison and blame them—and people do! They say, I grew up poor and I’m not in jail. I have had some very heated discussions about this in classes. People really want to believe race and poverty are not factors, which would mean all these young Black men are really criminals, that something about Black itself leads to criminal behavior. This means we can blame Black people, feel justified in fearing them, and not notice the inherently racist messages we are sending on the subject day by day.

But remember, this is an inherent bias in how we judge people. The system is rigged against Black men. First, we systematically deny them the American Dream. We value only their entertainment and sports contributions, and don’t take them seriously as statesmen, businessmen, leaders, or even presidents. We never asked any other president for their birth certificate, ever.

Next, we create and enforce poverty in their neighborhoods. NIMBY projects get voted out of White neighborhoods and into Black ones, jobs move away, and take all the White folk with them, whole industries collapse, and Black men are not invited into their replacements. Goodbye, Detroit. Third, we stop and frisk, arrest, try, convict, and incarcerate Black men at higher levels than others for the same crimes. Even supposing Black men commit these crimes at these higher levels, we cannot account for the number of Black men in prison because so much of the bias goes on following arrest.

Finally, we rob Black communities of their political power—by imprisoning their voting-age men, denying them voting rights following their release, targeting impoverished voters with new voter ID laws and other impediments (such as changing times and voting locations on short notice), and redistrict White voices in to Black neighborhoods to finally cement the fact that Black men will not have representation in our government in significant numbers. We have had eight African-American senators. Ever. It isn’t too easy to find out how many Congressmen are Black, but the number seems to be around 42—out of 435. That’s less than 10% with Black people accounting for some 14% of the population.

Overt racism may have gone away (and I’m going to be careful with this assertion), but the numbers do not lie. Racism is alive and well, at least covertly. From unemployment to environmental injustice, our country discriminates every day.

Saying things like opportunity is everywhere, we all have the same two hours in our day, and I grew up poor and didn’t go to jail, these things are all racist comments. Ignorant, unintentionally racist comments, but racist comments. They are racist because we have not taken the time to understand the person in front of us, have judged them without fully knowing them or their situation.

If we want to fix these situations (and our track record does not make me positive on this issue) then we need to address social injustice at every level—starting with congressional districting. Black people will never have a chance for justice without representation. Eric Holder, amidst much scorn and controversy, proposed a step back in this direction following a recent Supreme Court decision in favor of “states’ rights” by asking for judicial review of Texas’ voting record and practices. This would be one of many steps we need to take right now, before the sting of the Zimmerman verdict wears off. The iron will never be hotter.