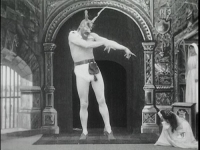 The Devil in a 1901 Georges Méliès film.

Flipping through television stations, I caught an old Warner Brothers American history short, detailing in ten minutes the highlights of what makes America special—from the Bill of Rights to the Gettysburg Address to the sacrifices in World War One—the War that was supposed to end all wars—to the unified efforts of all Americans in World War Two, fighting for freedom and against “man’s inhumanity to man,” only to find a few years later that America would be engaged in a Cold War.

The film ended there, but “man’s inhumanity to man” hasn’t.

This week, the Supreme Court—shockingly or not, depending on your level of pessimism—handed down a decision eradicating a portion of the 1965 Voting Rights Act, which now allows states that were likely to pass laws making it more difficult for some groups to vote to go ahead and do so without federal approval. Within two hours of the Court’s decision, Texas wasted no time and did so, approving a voter identification measure that had been blocked, as well as putting into effect massive redistricting.

On The Daily Show with Jon Stewart‘s report on the decision, John Oliver noted that Chief Justice John G. Roberts Jr., writing for the majority, said, “Our country had changed” in the 40-plus years since the Voting Rights Act was passed. Oliver agreed, stating that now we had iPads, and that many more people were allergic to bread, and oh yeah, we had the Voting Right Acts in place!

The Chief Justice suggested that it was the place of Congress to ensure that new laws were enacted to make sure that future racial discrimination was prohibited. Based on the success of important legislation getting through Congress in recent memory, I’m not holding my breath. After all, one of Congress’s most recent debacles, the Farm Bill, a bill that has almost never failed to pass, was defeated this year, primarily because much of it had to do with food stamps—i.e., feeding the poor and needy.

Meanwhile in Texas, we also had small acts of heroism. State Senator Wendy Davis, a Democrat representing Fort Worth, filibustered for more than 12 hours on the floor of the Texas State Senate in order to prevent voting—at least for the time being—on one of the most restrictive abortion bans in the country. This filibuster, which according to the rules required no breaks for food, water, or the call of nature, prevented voting on a measure that would have, according to spokespeople from Planned Parenthood, effectively banned most abortions in the state.

And even though we saw landmark rulings on Wednesday in the gay marriage issue, extending federal benefits to all married couples, gay as well as straight, in states where gay marriage is legal, and also the ruling overturning California’s Proposition 8, this does not make up for the continuing inhumanity. The majority of American states do NOT allow gay marriage. More and more states are looking to increase the restrictions for abortion and limit a woman’s rights over her own body, despite the physical, emotional, societal, and financial consequences.

How does this differ from inhumanity? How can we say that we are for freedom when we are constantly restricting the freedom of others?

One book that is high on my list of must-reads right now is Philip K. Dick’s The Man in the High Castle. I am very attracted to its premise—what if the United States lost World War Two, and Germany and Japan divided up the US between them. How different is a country run by fascist dictators from a country run by corporate interests that control what on paper—remember those quaint olde papers, the Declaration of Independence and the Constitution—is supposed to be a Democratic government? I agree with Jason Dias, who has called for an overhaul of our political system, although I recognize the impracticality and unlikelihood of that happening.

The question I am left to ponder is how do we move from living in the existential despair of this continuing inhumanity to finding ways, big and small, each and every day, to find ways to relate to our fellow Beings-in-the-World in a more compassionate and healing way for this planet.