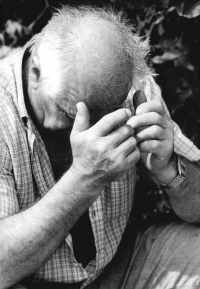 Can despair save us?

Rollo May’s breakthrough work was a book about anxiety. This work was the first time a psychologist wrote positively about anxiety for an American audience. The Meaning of Anxiety (May, 1950) made a big splash in small circles. Both before and since, though, Americans have largely viewed anxiety as something needing attention only inasmuch as that attention resolves or dissipates the anxiety. Namely, tranquilizers.

May examines anxiety as a potentially positive force in our lives. If we pay attention to it and take rational action based on it, anxiety can inform us of our values and can motivate change. Moreover, it can also drive the artistic process. And the root of May’s anxiety, indeed, of any feeling, is care.

Last month, I wrote that the end is near, that climate change is upon us, and most likely irreversible. I invited the audience to experience not only anxiety but also despair. This led to some interesting side-discussions about the utility of despair. I believe despair has value, because despair is a part of us. Just like anxiety, if we try to annihilate despair, we self-aggress. But beyond this basic, intrinsic value, it also might have some utility.

Sometimes we need despair to change our behavior.

Imagine a man like Eliot Spitzer. A powerful man, perhaps he feels he is entitled to and can get away with the fruits of some crime. Then he is caught in that crime and loses everything—his job, political future, family. We hope he is mortal like us, with a conscience like ours, and so he must feel some despair in the midst of these trials. He must be an arrogant man brought low. And in this time of despair, he has the chance to evaluate his life—to decide and act upon his values. To apologize, to set to rights, to begin again from a new place.

Authentic despair is that emotion which forces one to come to terms with one’s destiny. It is the great enemy of pretense, the foe of playing ostrich. It is a demand to face the reality of one’s life…. Despair is the smelting furnace which melts out the impurities of the ore. Despair is not freedom itself, but is a necessary preparation for freedom. (p. 235)

The harsh truth is that the oceans are ruined, the air is ruined, the climate is ruined, and humans are responsible. Until we are able to face these facts boldly and baldly, and despair over them, we are unfree to act. We can still deny their truth and thus deny that action is necessary or desirable.

Despair is not pleasant. I do not wish it on you, on us, lightly. It is a smelting furnace. If we all feel the appropriate despair, many or even most of us will be burned by it. Suicide results in bad outcomes more often than not: suicide, addiction, worse. But courage can also be the result of despair—to triumph when one feels worst, to decide to be better and do better are courageous acts that require this feeling. And it also requires courage—the bravery to experience the full force of despair—to be rocked and moved and risk being destroyed by it. The suicide, addiction and worse are outcomes of trying to deny despair, to annihilate it, but also of being rocked by it.

It is sometimes said that the difference between humanism and existentialism is humanists believe people are good and existentialists are less sure. We existentialists think you can also self-actualize towards evil. That you can have the best environment for growth and still choose to shrink, that you can see you have been bad or wrong and choose to double-down on your most harmful traits or habits. It is a shallow argument and a shallow distinction. But there we are.

Thus, once again I invite you to look upon what we have wrought and to despair. Like many caught in infidelity, we all now have a choice. Double down on our vices or turn towards those people and things worthy of our care.