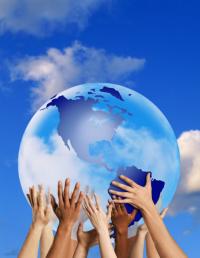 Bill Gates stated at the World Economic Forum in 2008 in Switzerland, “there are two great forces of human nature—self-interest and caring for others.”

It is easy to understand the impact of giving and taking at a global scale. Our world leaders show us the results of both. Mother Teresa, Gandhi, and Martin Luther King amply demonstrated how giving results in large positive change. In contrast, Hitler, Stalin and Gadhafi embodying the taker mentality caused great strife and destruction.

It is a lot harder to understand the impact of giving and taking in the context of our organizations and teams. We may be part of a benevolent organizational culture but work in a team that is less giving. The opposite could also be true.

Right after 9/11, a group of Harvard psychologists conducted an assessment of 64 intelligence groups to help determine their effectiveness. To everyone’s surprise, the strongest predictor of group effectiveness had nothing to do with expected organizational characteristics such as stable team membership, well-defined roles, appropriate rewards or even leadership. These psychologists found that the strongest predictor was the amount of help the analysts gave to each other. Members of highly effective teams helped one another, openly collaborated and shared information. In contrast, individuals in the lower rated analyst groups worked in isolation, did not help each other and information was reluctantly shared.

This is not an isolated finding. The literature on reciprocity and giving cultures documents the positive effects of giving in organizations. Some companies like Berkshire Hathaway, IDEO, and Gold’s Gym have taken the idea of a giving culture to their hiring practices by attempting to exclude candidates with potential taker characteristics.

Adam Grant from the University of Pennsylvania’s Wharton School and author of Give and Take defines organizational cultures as giver, taker or matcher. In a giver culture, helping and collaborating is the norm and people are encouraged to give without concern for immediate retribution. Taker cultures provide an environment where self-interests drive organizational behavior. In this type of culture, winners are those that take the most and are able to build their power at the expense of other. Grant states that the majority of organizations are somewhere in the middle and attempt to match giving with taking.

Grant and other psychologists observed the reciprocity dynamics of small teams and concluded that giver teams are more effective in:

Giver teams are also more efficient because there is little to no time involved in reciprocity negotiations. On the other hand, matcher and taker teams can spend considerable time negotiating who gets what. Animosity and lack of team cohesion could result from unbalanced reciprocity in these teams.

The culture of giving, taking and matching is founded in a number of evolving theories. In 1963, John Stacy Adams introduced equity theory, which posited that individuals are motivated by a sense of fairness. This sense of fairness is determined by one’s rewards relative to one’s work-related inputs (e.g., education, productivity, experience). Equity theory evolved into equity sensitivity theory which introduced the concept that not everyone responds to fairness to the same degree. This latter theory identified benevolent, entitled and equity sensitive individuals which are equivalent to Grant’s givers, takers and matchers. Current research on these theories proves that equity theory (equal fairness for all) and equity sensitivity theory (a graduated level of fairness attunement) work well in cases were individuals regardless of their levels of fairness sensitivity are under rewarded. There are notable differences on how benevolent, entitled and equity sensitive individuals behave when rewards are fair or better. Givers respond to intangible rewards more than their taker and matcher counterparts, and are better at “paying it forward” in all fairness conditions. In fact, in seemingly unfair conditions, takers and matchers become more self-centered and more “unfair” to others.

Akan, Allen and White in their research article Equity Sensitivity and Organizational Citizenship Behavior in a Team Environment correlate equity sensitivity to the behavior of team members in relation to the norms of the team. In this research, the authors conclude that givers are far more likely to adhere and support team norms. Matchers and takers could go as far as sabotaging the team if they feel that conditions are unfair. Akan, Allen and White’s research focused on organizational citizenship behavior which is individual behavior that is discretionary, not directly or explicitly recognized by formal rewards, and that in the aggregate promotes the effective functioning of the organization.

Grant’s observations about givers, takers and matchers and their individual success measured in career advancement, determined that givers fall at both ends of the bell curve. That is, they are the most and the least successful. He posits that successful givers have figured out how to operate effectively in their social systems at work. In contrast, the less successful givers are viewed as suckers and doormats by their peers. Grant provides guidelines for givers and their managers to better regulate their interactions and turn their giving into personal and collective success.

In an effective giver culture asking for help is the norm. However, givers are often timid about asking for help for themselves, but they can be taught to use agency and ask for help on behalf of someone else. Agency is a well-accepted process by givers. In addition, these individuals are notorious for giving of their time and could be left without time for their own activities. Givers can be taught to block off quiet time where they cannot be interrupted, leaving the rest of the time to helping others. Finally, givers (the less successful ones) have difficultly discerning the value of the emotional appeals of their requestors. Managers and mentors can help these givers gain perspective on emotional appeals and apply themselves to those with the greatest collective value. This latter strategy is important for givers to effectively fend off takers.

There is enough research evidence to at least consider the idea of giving as integral part of organizational culture. The research at the work team level is better developed showing a strong correlation between giving teams and their effectiveness, and the ability of givers to sustain and enhance organizational citizenship. If you are a giver, these research results may seem obvious to you. However, the challenge is how to create and maintain giver cultures in our work teams, and our entire organizations. The upside of giver cultures is at the very least intriguing and could prove to be what makes our organizations successful and sustainable.