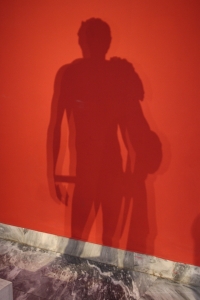 Integrity is a suggestive, inarticulate word: its definition is hard to pin down. For most of my life, I’ve associated the word integrity with “character,” yet another evasive word with multiple meanings. I’ve thought of integrity as suggestive of morality, of the ability to stand up for what’s “right,” to sacrifice one’s self for the greater good.

So, in my adult life my ideas about integrity have shifted. Anybody who knows me also knows my allegiance to paradox. I have come to see that the plurality of truth is more aligned with my experience. Pay attention. Alignment is key to understanding integrity.

The poet, Robert Bly, writes about the shadow in “The Long Bag We Drag Behind Us.” He describes how we unconsciously eradicate parts of ourselves. “Behind us we have an invisible bag, and the part of us our parents don’t like, we, to keep our parents’ love, put it in the bag.” Indeed, I have the back pains to prove it.

So, what happens when we throw parts of ourselves into a bag? Bly uses Robert Louis Stevenson’s character(s), Dr. Jekyll and Mr. Hyde, to illustrate how our shadow finds its way out of the bag, and by the time it is out, it is angry. It alarms us. Most importantly, it does not behave in a way that is congruent with our self-concept. Thus, we become ignorantly deceptive.

The analogy I use with clients is eating a pumpkin. If we swallow it whole without cutting it up, cooking it, baking it, chewing and tasting it, we end up with a large, heavy stone in our stomach. We have not integrated it because we have not experienced it. But the pumpkin is stuck there, and it will not pass. Another example is backpacking. Our packs are heavier on the way in than on the way out. We’ve eaten half our packs. We have integrated our food. Our backpack is now less of a burden.

How many people do you know who talk a very appealing, moral talk, but are disarmingly unaware of how they impact others? They may do something hurtful, yet when confronted, are insistent in their claim that being hurtful was “not their intention,” that they’re upset that anybody could make such a claim about them. They’re not that way at all. Yet, their behavior makes quite a different claim. Well, excepting a few very expert sociopathic liars, I say, trust me on this: they really don’t know what they’re doing. They really don’t have bad intentions. They really have no clue that they have caused harm (well, at least not consciously). They are not congruent. And yes, they are showing a lack of integrity.

A great example is John F. Kennedy. He was probably one of the best presidents the United States has known in regard to social issues. He cared deeply about providing opportunities, and although he was assassinated before many of his ideas came to fruition (we can thank Johnson for completion of many projects, like Head Start), when a beautiful woman was available, his wife’s needs and that woman’s needs became unimportant. Both women became objectified. So much for social issues. One could argue that JFK had some shadow around women. Thus, he lacked integrity because the standards he professed were not congruent with his personal life and relationships. This doesn’t make him less of a great president. It does point out the humanity than many iconic figures can’t avoid despite our insistence upon worshipping them. In a way, we inflict the shadow upon them.

In his essay entitled “Acknowledging Our Inner Split,” Andrew Bard Schmookler asserts that “what we cannot face will catch us from behind. When we gain the true strength to acknowledge our imperfect moral condition, we are no longer possessed by demons.” Here, the author is speaking to the relationship between the shadow and incongruence. Most of the time, our incongruent behavior is a result of lack of awareness. People do the opposite of what they say they will do all the time. Sometimes, it is the opposite of what they tell themselves silently. Sometimes, it is the breaking of a promise. Sometimes, they know and come up with elaborate rationalizations to justify the incongruence. Other times, they truly are not aware of their transgressions. Remember, I am not talking here about a strict moral code. I am talking about honesty with self and others.

Have you ever had a person tell you flat out to your face that they would not do something for you because they either did not feel it was right for them, or they just plain didn’t want to in the moment? I have. I’ve felt disappointed. However, if I really think about it, I recall that I’ve been even more disappointed with people who have made promises to me and broken them, been dishonest somehow, or done something they didn’t really want to do only to chew me out for it later rather than be honest from the get go.

Sometimes, it is the people who disappoint us with their initial honesty who seem to have the most integrity. What they say is aligned with what they do. They have learned that it is better not only for themselves, but for their relationships if they are forthright from the get-go. The disappointment of an initial “no” or, “I’m sorry, but I just don’t feel that way about that issue” is far less of a pain than the feeling of being stabbed in the back by the shadow of another. It leads to a sense of mistrust. I know that the people I trust the most usually have a harder edge. I know I can believe them. Their behavior is congruent and aligned with the values they profess. My guess is they’ve learned to dance with their shadow, and although I don’t believe anybody walking and breathing on this planet has an entirely in-tact sense of integrity, I suspect that people who openly disappoint me have a higher degree of integrity.

So, integrity is not about “right” and “wrong.” Integrity, it seems, is about knowing who we are despite the dictates of right and wrong (that includes our primitive, dark, gritty, ugly, gluttonous, horny, persnickety selves) and learning to align with that, for ourselves, and so we can be honest for the greater good. This is why the term “integration” is so critical to mental health. If we are to help people develop integrity, we must help them become conscious of the exiled self so it doesn’t come back to haunt us in some disarming way. We walk hand in hand with ourselves, rather than single file. We face others rather than relate with a sideways glance. The geometry of our being changes, our chaos gets a little more organized, and we develop a sense of integrity.