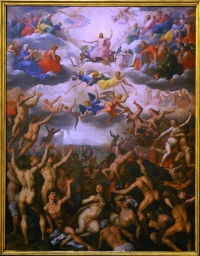 I recently watched the film Seeking a Friend for the End of the World, with Steve Carell and Keira Knightley. Without giving it all away, Carell’s character, Dodge, is faced, as is all of humanity, with the imminent end of the world. An asteroid is on course to destroy the planet, and there are but a few weeks of life left on earth.

The film portrays various responses to this whale of an existential dilemma. First, we view all forms of apathy (what’s the point; it doesn’t matter anymore) and anarchy (fair game for everyone; let’s destroy it because we can). Dodge’s friends and co-workers depict a variety of responses, including anxiety and depression, suicide, drug, alcohol, food, and sex binges. We see the absurd play out in a variety of ways as well. Dodge’s boss declares every day Casual Friday, for those who are still coming to the office. There is a dinner party at a friend’s house with everyone stating what they will do in the next couple of weeks ahead. The answers range from places people will go to visit, to eating whatever they want, as if they’re just going on vacation. There is no talk of what’s really at stake.

Dodge, whose wife literally ran away when news hit that the world would end, sits there, quietly, not really engaging in the absurdity playing out before him. He’s depressed and becomes apathetic. He clearly does not know how to make meaning of his life and its end. He then meets Penny, played by Keira Knightly. She shows up crying because she will never see her family again. The two end up on a wild adventure together, facing more absurd responses, but also finding beauty. There is a scene on a beach with people coming together. The scene is mostly silent, the importance of viewing real conversation, laughter, and sharing, which creates a different message and tone to the film. This is a turning point for them on their journey. What I found tender and lovely in this film (and the film did not get great reviews) was the opening of both to the vulnerability of their situation. Ultimately, there was no choice for them but to be vulnerable, and with that came a deeper choice—to love and be loved more fully, and wholeheartedly present.

This film brought to mind two other films that I have loved, and will probably lead to a string of films that have a similar theme. There are so many films that take on the big questions of life, some blatant, others subtle, but of interest to me in this thread of thoughts is the idea of being forced to find meaning. We are all aware of our ultimate destiny, maybe some more than others. Certainly, a terminal illness or death sentence might force one to find meaning. In the films I am thinking about, meaning making is forced due to highly unusual circumstances. In Seeking a Friend for the End of the World, all of humanity was faced with the same dilemma at the same time.

In Groundhog Day, one man is faced with his seemingly endless destiny and is forced to find meaning. Bill Murray plays the lead character, Phil, who goes through a variety of responses to his existential predicament—like the characters in Seeking a Friend, only Phil is alone in his struggle. We see him in all manners of being destructive and despondent, manipulative and mean. We see him struggle, not only with what he has brought to this circumstance– his self-centered life as a weatherman Phil Connors, but also with the isolation of his predicament, in that he is the only one who is aware that every day is Groundhog Day. Finally, he chooses to use his time differently, learning languages, doing good for others, and embracing his existence, albeit very strange. Phil ultimately breaks the “spell” of reliving February 2nd over and over again.

Another film that has come to mind is one that I used to watch whenever it was on TV when I was a kid—Logan’s Run. If you don’t recall the story, humans are living in a utopian city, where every pleasure and desire is available and life is “perfect”, as long as you don’t mind being eliminated at age 30. The “run” in Logan’s Run is the main character’s attempt to leave the city and prevent his imminent death. Outside the city, with his female counterpart, they discover an overgrown, imperfect world and see the aged for the first time. Skipping over a great deal, including capture and interrogation, Logan ultimately is able to free the city. When Logan is faced with his imminent death, he is forced to find meaning, not resignation. This makes him vulnerable, indeed a target, but proves to be worth it. There are many existential issues in Logan’s Run. The justification of living in a utopia in exchange for a manipulated and shortened life is one, and the kind of brainwashing of that leads to an existence that is a complete breakdown in freedom and destiny.

The opportunity for film to be our guiding myths is not a new thought. The arts in general are a powerful venue for engaging in the sharing and understanding of myth in our lives. The existential crises that we experience need myths to help us form meaning. Rollo May (1991) wrote about this, outlining the contributions of myths to our lives under four headings in The Cry for Myth:

First, myths give us our sense of personal identity, answering the question, Who am I? … Second, myths make possible our sense of community … Third, myths undergird our moral values … Fourth, mythology is our way of dealing with the inscrutable mystery of creation. (pp. 30-31)

If we look at the films I mentioned (and countless others) as guiding myths, we can see clearly how they relate to the contributions that May outlined. Identity, community, morality, and creation are all explored in vastly different venues, but are all connected by circumstances that forced characters into finding meaning by making choices that directly influenced their experiences of freedom and destiny.

What are your favorite existential films, and why?