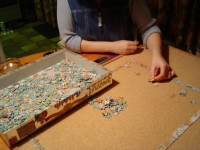 Even though the explanations about anxiety in the DSM-IV-TR (APA, 2000) detail concrete variables related to symptomatic characteristics, such as psychophysiological symptoms, aversive environmental determinants, problematic or dysfunctional behaviors, irrational reactions, all of those explanations omit the intentions/purposes, meaning, and specific needs of the person who lives those symptomatic characteristics. As a result, we can ascertain that those explanations from DSM do not address the crucial meanings and intentions of the human beings who experience these disorders. Halling and Goldfarb (1996) support this idea when they emphasize that, when using the DSM:

The behaviors and experiences, which are regarded as symptomatic of a disturbed state should be examined in terms of their intended purpose and meaning within the person’s life. That is, it is not helpful to view symptoms as “caused” by some internal or external agent acting independently of the person’s intentions. (p. 67)

However, explanations and ideas from DSM should not be ignored completely. I believe that knowing the objective aspects of anxiety could let us understand properly the influence of different variables, such as age, gender, economic situation, cultural background, etc., in the development of anxiety and psychopathological symptoms. Hence, explanatory theories about anxiety and psychopathology must be contextualized in the experiential context from which symptoms emerge. Bugental (1976) affirms that, “The inward sense about which I am concerned can be as effectively blinded by the denial of the objective as by its domination” (p. 7). This idea then includes understanding psychopathological symptoms as dysfunctional ways of affirming or preserving a specific meaning, even if the meaning is developed by destructive ways of behaving that lead to emotional suffering. This idea implies that when we are trying to comprehend dysfunctional experiences, we have to bear in mind a person’s meanings, intentions, and ways of approaching the anxiety that emerge from the confrontation with existential givens and dilemmas.

For example, if we do not try to grasp and understand the meaning that a client is intending in her or his dysfunctional experience, we might find our focus on giving abstract explanations (diagnoses) versus identifying the feeling or experience of what is happening to them (most can only identify and name feelings). As a consequence, clients would not be able to encounter their experiences with an existentially constructive approach. Bugental (1992) affirmed that:

A patient’s problem may be assigned a categorical name—hesitation, impotence, shyness, loneliness, depression, whatever. The process of naming has the effect of making a thing of the issue, of putting it at a distance. Implicit, often, is the notion that anybody afflicted by this same malady would be similarly troubled; the sufferer is not seen as unique. (p. 152)

The central point here is that any explanation about anxiety or human suffering must be preceded by a comprehension of both, the experience of anxiety and the lived meaning intended through suffering. In other words, we should be focused on understanding both, how the experience of anxiety emerges, and its relationship to dysfunctional disorders, before focusing our attention on the theoretical causes of that experience or on the dysfunctional consequences of confronting anxiety in a reductive or destructive way. For example, since anxiety has a direct relation to the values and meanings the person tries to affirm or preserve (1996a), we would need to understand the way the person tries to affirm or preserve a particular meaning or value, perhaps one that is unique to her or him. This idea would require us to understand human beings’ experiences from the meaning they intend, and not only from traditional theories. Our revised theories would have to take into account these meanings.

In this way, if psychologists do not pay attention to the meaning the person is trying to affirm and try to understand how the experience of anxiety emerges from that situation, psychologists would only be giving diagnoses and validating their assumptions about anxiety and psychopathology. At the same time, they would be refuting theories that do not fit their ideas about those concepts. For example, Yalom (2003) commented:

A diagnosis limits vision; it diminishes ability to relate to the other as a person. Once we make a diagnosis, we tend to selectively inattend to aspects of the patient that do not fit into that particular diagnosis, and correspondingly overattend to subtle features that appear to confirm an initial diagnosis. What’s more, a diagnosis may act as a self-fulfilling prophecy. (pp. 4-5)

This situation implies that psychologists would be ignoring the concrete meaning that the person who is experiencing anxiety is trying to affirm, which in my opinion would be an unethical attitude toward that person. In this way, psychologists would be focused on adjusting every person to their ideas or preconceptions about anxiety and psychopathology, instead of comprehending the person’s experience of anxiety from her or his concrete needs and meanings. I believe that Halling and Goldfarb (1996) support this idea when they affirmed:

But can labels do other than obscure richness of human experience and submerge the uniqueness of the individual? To answer this and related questions, it is necessary to look at some of the principles of phenomenological practice: (1) insisting on the existence of varying styles or patterns of human behavior; (2) focusing on the purposefulness of behavior, even when it is viewed as symptomatic; (3) understanding the context in which behavior occurs; (4) describing the context in which diagnosis takes place; and (5) remaining sensitive to the presuppositions which get in the way of understanding the patient. (p. 66)

Thus, if psychologists want to know and comprehend the concrete person who is living anxiety or developing dysfunctional symptoms, they should begin by approaching and comprehending her or his purposes and intended meanings, instead of beginning to rigidly understand that experience from their theoretical standpoint. “If the therapist seeks to stay in the listening mode, care needs to be taken to stay within what the patient has already expressed rather than introducing some new matter” (Bugental, 1992, p. 74). From this perspective, psychologists should try to understand the way the experience of anxiety and dysfunctional symptoms emerge before trying to know the causes of that experience. Focusing on knowing the causes of symptomatic anxiety and psychopathology would only lead psychologists to worry about abstract questions related to causality. In other words, psychologists have to grasp and understand the concrete meanings and/or values that a given person tries to preserve or affirm (Bugental 1978, 1992, 1997; Laing, 1960; May, 1967/1996), and comprehend the experience of anxiety and the way dysfunctional symptoms emerge from that point.

In the light of that, Yalom (1980) says that it is very difficult to capture the meaning and the vital energy of a person when we are only studying the parts that compose that person (for example, the conscious, the unconsciousness, the super ego, the ego). Even more, he emphasized that with the empirical approach, we will never discover the meaning that any structure has for the person to whom it belongs, because the meaning of every person cannot be deducted from the study of the components. The meaning is not a product of causality, but it is a creation of the human being, who is superior to the sum of the parts. Binswanger (1958) clarified and supported this view when he stated:

Like the biologist and neuropathologist, we [Existential Psychologists] do not stop at the single fact, the single disturbance, the single symptom, but we keep searching for an embracing whole within which the fact can be understood as a partial phenomenon. But this whole . . . is no objective whole at all but a whole in the sense of the unity of a world-design. (p. 205)

With contradictions like these, it is evident that we must question the tools that human beings use, such as psychology, in order to know if they are really talking about themselves and if they are referring to those specifically human qualities and potentialities that make people different from other beings. If psychology does not point specifically to what is called “human,” human beings will not do more than escape from themselves, because they would not take care of the basic assumptions of their existence.

A version of this article appeared in The San Francisco Psychologist, Winter 2010, p. 1.

Today’s guest contributor, Alberto DeCastro, has his Ph.D. in Psychology from Saybrook University, a Master of Psychology from University of Dallas, and is currently a full time professor in the Psychology Department and director of the Graduate Studies of the College of Social Sciences at Universidad del Norte, Colombia.