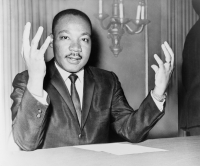 Photo by New York World-Telegram and the Sun.

Dr. Martin Luther King, Jr., in 1967, just months prior to his assassination, addressed the American Psychological Association (APA), encouraging social scientist to take a more humanistic approach to understanding the effects of racism and segregation on African Americans by leaving the laboratory for the hedges and by-ways of American society:  In his address, King said:

In the preface to their book, Applied Sociology (1965), S. M. Miller and Alvin Gouldner state: “It is the historic mission of the social sciences to enable mankind to take possession of society.” It follows that for Negroes who substantially are excluded from society this science is needed even more desperately than for any other group in the population.

For social scientists, the opportunity to serve in a life-giving purpose is a humanist challenge of rare distinction. Negroes too are eager for a rendezvous with truth and discovery. We are aware that social scientists, unlike some of their colleagues in the physical sciences, have been spared the grim feelings of guilt that attended the invention of nuclear weapons of destruction. Social scientists, in the main, are fortunate to be able to extirpate evil, not to invent it.

If the Negro needs social sciences for direction and for self-understanding, the white society is in even more urgent need. White America needs to understand that it is poisoned to its soul by racism and the understanding needs to be carefully documented and consequently more difficult to reject. The present crisis arises because although it is historically imperative that our society take the next step to equality, we find ourselves psychologically and socially imprisoned. All too many white Americans are horrified not with conditions of Negro life but with the product of these conditions-the Negro himself. (King, 1967)

In my blood is a Mandingo warrior—fighting for basic survival needs; fighting against anything that is a perceived threat—family or foe, because I am a warrior.  I wear the mask of my ancient ancestors, a mask used to ward off the enemy. I appear brave, even foolishly so, yet, deep inside I am afraid—afraid of nothing, yet fearing everything. I fear failure as well as success. However, I am willing to fail for the sake of success—willing to march into hell for a heavenly cause. My fear is not so much of the White man, but rather the fear that the White man has towards me. This fear that the White man has towards me, the African American male, is the basis upon which distrust, alienation, oppression, and microaggressions is predicated (Granger, 2011).

To embark upon the future of the social sciences with a sense of saliency, particularly existential psychology, it behooves us to reflect upon and embrace the poignant words found in the Black National Anthem: Sing a song full of the faith that the dark past has taught us; Sing a song full of the hope that the present has brought us; Facing the rising sun of our new day begun, let us march on till victory is won. It was in his inaugural address that Franklin D. Roosevelt (1933) immortalized the phrase “The only thing we have to fear is fear itself.”  Let us continue to march! I submit to every warm-blooded human-being, if you must fear something upon which to substantiate your reason towards alienation and skepticism, bullying, and/or any other form of microagression, fear the boogie man, not the negro, nor the Latino, nor the woman, nor the LGBT, or any other disenfranchised group.

Today’s guest contributor, Nathaniel Granger, Jr. works as a psychology instructor at Pikes Peak Community College and is the founder/pastor and CEO of Be REAL Ministries, Inc. in Colorado Springs, CO. Equal Rights and Civil Rights along with his doctoral dissertation, “Perceptions of Racial Microaggressions among African American Males in Higher Education: A Heuristic Inquiry” form the substratum upon which a majority of his work is predicated.