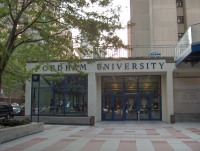 Interviewing the Students of Dr. Wertz
Richard Bargdill was fortunate enough to have the opportunity to interview three graduate students working with Dr. Wertz at Fordham University in New York. Sarah Kamens, Rachel Levine, and Miraj Desai were all interviewed at the very raucous Division 32 Hospitality Suite at the APA conference. Realizing that it is impossible to actually ever be Fred Wertz, the students were asked to describe what qualities Dr. Wertz has that seem to help him produce high quality students. The common themes centered on Dr. Wertz being passionate, humble, hard-working and an articulate communicator.

Passionate
Each student shared a “Dr. Wertz story” that concentrated on his passion for psychology. This meant his passion to push his students to do high quality work, to get them to study their own particular topic of interest and to become involved in the profession of psychology. When discussing what it means to have “passion” and how that influences his students, a student noted:

I mean just someone you can tell is just really into what he does… there’s a greater thing involved…a higher cause if you will. It sort of permeates his research, practice, teaching and all of it. Then realize you are also passionate about various things in the world and you should pursue them.

Another part of passion is that Dr. Wertz has a strong commitment to their education and allowing them “to find [their] own way too …It’s a process of finding your own voice. He’s not going to be the guy who’s like ‘you have to do what I do,’” another student commented. Dr. Wertz pushes his students learn the main skill sets, but also encourages students to be positive humanistic versions of themselves, not simply clones of him. One student stated, “It’s that kind of passion that is contagious and allows for students to be experimental and free thinking in such a genuine, authentic, compassionate and supportive way.” Additionally, the students noted that Dr. Wertz “really, really provides the space for the students…and encourages us to generate things that we’re passionate about and helps us to understand…and find methods to study them in a rigorous and systematic fashion.”

Humble
A second theme that emerged from the students’ responses was that Dr. Wertz excels in the area of humility. The students said Dr. Wertz often under-emphasizes his own contribution to various projects, deflecting credit to the students instead. He avoids opportunities to “bask” in success and frequently will compliment all of his co-researchers and their students. He is not likely to leave anyone out because he is concerned that others are recognized for their contribution. Earlier, one might recall Dr. Wertz equating his career success with “luck,” and it is this humility that the students appreciate. One student stated that Dr. Wertz has a great combination of intellect, reflectivity, “and also generosity and understanding so he doesn’t ever force insights on people. He brings them up at very opportune moments…he’s interpersonally extremely sensitive and generous and attuned and kind. And I think people see that in the department too.”

Hardworking
Passion is not always enough to get things done, as Wertz mentioned himself, and a new faculty member must make sure that their work is up to snuff, which takes commitment. One student stated, “Clearly it takes a lot of work. Fred works very, very hard. He provides all of us with an education not only in the standard areas; we have opportunities to get some of the best externships and research opportunities, but also one-on-one mentoring sessions. He spends long hours talking to us and commenting on our work and providing us with guidance.” If a faculty member is going to have a number of graduate students that are allowed to pursue their own interest rather than being given the professor’s own pet projects then there is going to be an increased time commitment. Fred Wertz appears willing to put in the time to help students do their own meaningful work.

Good Communicator
In discussing Fred Wertz’s connection with his surrounding faculty, his students discussed his positive form of communication. One student noted that he seemed to “enjoy” talking with other faculty members and listening to their points of view, but all the time he seems to be “building bridges.” Being an articulate communicator means listening to others and as well as speaking with some attentiveness to your audience. According to his students, Fred does both. He speaks in a systematic way, numbering (as he did for this interview) the points that he makes, and this helps the person who is trying to remember the relevant information. He asks if the listener understands and tries to clarify when he perceives that there is confusion. Fred also has a clear way of talking about a current situation which gets to the heart of the matter. These are things the students felt make him an effective communicator.

Conclusion
This interview with Dr. Fred Wertz is shared here so that new faculty might have a few ideas on how they can be successful with working with students and also how they can carve out a vital place for within their psychology departments. Dr. Wertz is a unique individual who would be impossible to duplicate and even difficult to imitate. But if we all consider emulating something from what Dr. Wertz and his students have shared with us, we can continue to build a base for humanistic psychology at our own various academic programs and thus have an opportunity to teach about our rich tradition and mentor graduate students to be new humanistic professionals. Below is a selection of the publications of Dr. Wertz he chose himself with hope that others will spend some time to pick up one of these works and get to know Dr. Wertz, at least, in a scholarly way.

Wertz, F.J. (1999). Multiple methods in psychology: Epistemological grounding and the possibility of unity. Journal of Theoretical and Philosophical Psychology, 19(2), 131-166.

Wertz, F.J. (1985). Methods and findings in an empirical analysis of “being criminally victimized,” in A. Giorgi (Ed.), Phenomenology and psychological research. Pittsburgh: Duquesne University Press, pp. 155-216.

Wertz, F.J. (1982). The findings and value of a descriptive approach to everyday perceptual process, Journal of Phenomenological Psychology, 13(2), 169-195.

Today’s guest co-contributor, Trisha Nash, is a doctoral student at the University of Memphis, who is currently on internship at Utah State University. She has been involved with Division 32 for about five years and is currently working with the membership committee and the Student Ambassadors.