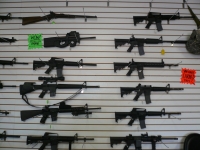 There has been a lot of talk about gun violence and gun control. Conversations we need to have as a nation, desperately need to have. America’s Shadow—one of its shadows, at least—is a dangerous one: an armed one, a xenophobic and paranoid Shadow that threatens us all.

In this conversation as in any, people readily choose up sides. I am a pacifist and therefore choose up the disarmed side. But in choosing up our sides, we sometimes represent our arguments in simplistic ways, risking a reduction to the absurd.

For example, we can say if nobody had guns, nobody would be shot in America. True. The English don’t have guns to speak of, and therefore almost never get shot. But who is going to disarm the Americans? Not me. Is it even practical to try? There are 350 million guns in this country. Can we even just go after the really dangerous ones—the high-capacity magazines or those easily converted to full automatic? The military-grade ones? How do we define them, liberate them from their owners, and prevent them from coming back onto the scene later? Or prevent the shooters from still shooting, just with something lower-capacity?

We need to talk about it, but need also to be realistic about it, and to understand that the gun really isn’t the problem. Limiting access might eventually have some effect on how well-armed our criminals are, but the criminals remain the problem.

We can reduce this to the absurd, also. A Facebook bumper sticker proclaims that the gun owners will concede to relinquish their gun rights when we also ban cars, as cars are responsible for at least as many deaths. However, vehicular homicide is relatively rare. In addition, deaths involving automobiles are a matter of public concern sparking numerous regulations—speed limits, safety features, DUI laws, and so forth. Guns, with few exceptions, are made for killing, while cars are not made for killing. Their purpose is transportation. This is an absurd reduction, an apples/oranges comparison. The point is to make the person interested in regulating look silly, to avoid the conversation we need to have.

Arming teachers or posting armed guards in schools is another such reduction of the problem. We need to look at what sort of society we wish to live in. Do we want to live in an armed camp, in constant danger and constantly aware of it? Is armed opposition our only realistic course of action, or might it further serve to worsen the problem?

We live in a culture of violence, where we look for simple solutions like the death penalty. We live in an eye-for-an-eye country, prepared to make war overseas on countries only tenuously linked to a few people who offended us, to spend billions of dollars and hundreds of thousands of lives prosecuting a vendetta. Is it any wonder that when our people have problems they quickly escalate to violence?

It is very hard to get medical care for most of the population, who are poor. When we get that care, our problems are trivialized into chemical imbalances easily set straight with a few pills, and when pills don’t solve our problems, we must be treatment-refractory, resistant, or criminal. Three strikes and you’re out—out of society, out of your right to vote forever, out of sight, out of mind. We make heroes out of soldiers and villains out of teachers. We push the line on media violence every day.

Can we blame all this violence on the mentally ill? Don’t they just reflect society’s shadow? I’ve known many men who thought they were Jesus because Jesus is prevalent in our culture. A hundred years ago they might have been Napoleon, but he has faded from relevance. And these Jesuses are often violent, persecutory figures, shooters, and stabbers. Doesn’t this reflect a certain Jesus in many of our more fundamental churches, who will punish those who offend him with brimstone and hellfire? Who hates gay people and liberals?

What would posting armed guards in our schools do for this element, this vengeful, impotent-feeling element who find power in murder, so hopeless that this violence seems their only path to respect? How would this not simply escalate the violence? Without first treating the social ills, this become a dangerous, wrong-headed alternative, a quick-fix in a society where the quick-fixes are the first problem. People will then flock to the schools with improved weapons, tactics, and planning.

The first thing we have to do is learn to love one another again. Interest-group politics is killing us, for-profit medicine is bleeding us dry, and capitalist culture is making us into human resources, to be used and cast aside. When we lose our humanity, it is in these acts of violence and their aftermath that we can find it again, if we have the will. Can you love Casey Anthony, and Mark David Chapman, and David Phan? Adam Lanza? Robert Gladden? It is our hate of them that drives these events. Our lock-up culture of for-profit prisons and cast-off children. Can we instead love them, try to feel empathy, not describe them in terms of monster or shooter or gunman but as aching, achingly human beings? These terms are another reduction to the absurd, a way of saying we don’t need to address our own shadow, because these people are “just” mentally ill, “just” monsters. Evil.

Do we have to resist violence with violence or maybe is there more sense and reason in first addressing the social issues that lead to violence? Wayne LaPierre, the executive vice president of the NRA, recently said the only way to stop a bad guy with a gun is with a good guy with a gun. That is, the only solution to armed violence is more armed violence. In these terms, and risking a flame war from any people with guns who are in all other ways perfectly good, I don’t think there are any good guys with guns. When we have to shoot a criminal, we have failed as a society. The shooter is the tip of a wedge of evil, and that wedge is us. We didn’t care enough about the person when they were being bullied, were poor, were addicted, were raped systematically, were abused by their parents, were hungry. Even in the case of a sociopath, we didn’t care enough when the small signs started in childhood. Or in the schizophrenic, we didn’t care enough to fund hospitals so they could and should do more than hold the person for a few days until drugs are in their system. We only care enough to blame them, discard them, and, in the end, shoot them.

Good people with guns? When we have allowed these completely fixable problems to escalate to violence, there are no good people any more, armed or otherwise. We are at best ignorant and careless, and have done grave harm to the citizen we have armed, put in the front line, and told to protect our lives with theirs. Any police officer who has had to shoot someone in the line of duty must and should feel tremendous agony over the need and needs our compassion more than ever, not our blithe and callous insistence that the kill was righteous.