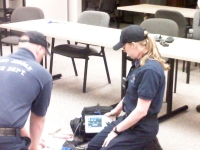 The lived experience of having someone die in your presence can have personally impact. I had the occasion to listen to the account of a paramedic’s experience with having a patient literally die in his arms. I was able to offer an existential perspective to him, drawing the on the works of Rollo May’s The Meaning of Anxiety and Ernest Becker’s The Denial of Death when responding to his personal story. I relate the story to you.

The paramedic responded to a morbidly obese elderly woman who lived alone. He described how the woman’s abode was cluttered and reflected an existence that was supported by modest income and resources, to say the least. The cycle of poor health and socioeconomic depression was the vortex in which this woman seemed to have been living for quite some time. The patient’s overall situation left her in poor physical condition and hygiene. Even the inhumaneness of the environment gave the paramedic an unsettled feeling. As I listened to his description of the setting, I recalled how Becker explains how the rawness of our biological nature prompts us to psychologically confront our mortality. In this instance where a person is sick and living in conditions some might consider unfit for any living being, the sense of finitude that permeated the atmosphere presented a world depressed.

The paramedic initiated his patient assessment at her bedside and found her to be quite alert and responsive. However, there were ambiguities in the signs and symptoms from which he had to draw some conclusions about her general condition, the nature of her illness, and how urgently she might need to be to be transported to a hospital. In pre-hospital emergency care, it is emphasized that one makes a rapid general impression of the patient’s condition to make a transport decision. There are many conditions in which the paramedics and EMTs can start medical interventions that stabilize a patient for transport. There are others when the person needs a doctor, and no field interventions can justify delaying the patients getting to the hospital.

The general impression the paramedic formed was that the woman was doing all right. But his monitoring equipment was indicating that some things were not normal but there was not a clear picture of what that was. The paramedic asked the patient if she wanted to go to the hospital and be seen. The patient said that she really just didn’t feel well and wanted to rest. The paramedic described the angst he was experiencing due to the ambiguities and inconsistencies of whole picture: (1) the negative readings on the monitor, (2) her alertness and responsiveness, (3) general complaints of not feeling well, but (4) not wanting to see a doctor. She basically had called 9-1-1 because she felt generally lousy and needed some, perhaps any, help and comfort that could be offered. For the paramedic, the feelings of not being able to pin down a concrete problem and treatment strategy escalated his anxiety and concern for her. Signs of a problem, diffused and ambiguous, began weighing heavier on the paramedic as the situation unfolded.

The paramedic came to the conclusion that it would be best to have her seen at the hospital. He expressed his concern to the patient and asked her to go to the hospital. She consented to go, even though she had been saying repeatedly that she would be fine and she just wanted rest. Another principle taught in pre-hospital emergency care is to “treat the patient, not the monitors.” Often times, monitoring equipment gives false positives when a patient really looks and expresses that they are in dire need of medical intervention. This patient was presenting physically, socially, and verbally quite well. She only said that she was feeling generally lousy and tired. There was not specific chest pain, trouble breathing, or other specific complaint. The paramedic’s partner had gone to fetch the stretcher from the ambulance, while he ushered her to the living room where the front door was. They were talking along the way when she suddenly fell quiet. As the paramedic was walking behind her, she stopped and slumped backwards so that he had to catch her. He called to his partner who was on his way back. The partner rushed in to help the primary paramedic get the woman safely to the floor. The woman’s heart had stopped, and she died in his arms.

The paramedic related to me that the whole time he was trying to assess her condition and figure out what to do, something he felt urged him to simply love the woman. It was like being with her and witnessing her humanity-in-helplessness of her impoverished living conditions and poor health—she simply needed him to be present in a human way. The medical side of treatment was dubious and difficult to understand. But a clear sense emerged of her needing him to make a human connection and simply care for her in the process of conducting other normal procedures. He said he was mindful of the importance of that caring while he continued to do his paramedic duties.

Dissonance has remained with that paramedic since that day. As I could see the disturbance in his whole countenance as he related the story, he told me how helpless he felt not being able to do his job—a sentiment I hear often from emergency responders that lose a person in their charge. He tried to treat the patient and not the monitor, but in this case the monitor was right. It was indicating some problems in her vital signs that were inconsistent with her alertness, normal skin color, and competent motor-functions. He sounded psychologically stuck in why he could not figure out the true nature of the situation so that he could do something to intervene.

I told him that I could understand how all of the conflicting information made the situation a difficult one to read. Moreover, it is a delicate situation when a person exercises his or her agency in medical decision making, and he did well to honor that. Further, we realize that a ride to the hospital in the ambulance is costly, and he could see that more medical expenses would not help her unless justified, which was very unclear in this case. In balancing these duties and values, he persuaded her to go to the hospital but was apprehensive because of the all of uncertainties about the need. It must have been hard to be in such a situation.

I realized I had missed the most salient point when he explained that, she died right in his arms. Literally, a person died in his arms as he held her, and there was nothing he could do. This paramedic had been walking the Being/Nonbeing border with this woman and essentially ushered her to the other side. For a paramedic, this can be experienced as a failure of mission and duty because emergency medical responders snatch people from the clutches of death before they permanently crossover. At least that’s the goal. I finally realized that he had lost her and lost a little faith in himself.

The thing about the emergency medical services is that we can only intervene and implement procedures that give people a better chance of survival. We support people biophysiologically when they are hurt or ill, but also interpersonally as we attend to them medically. In cases when we cannot “save” their lives, the best we can do is show up and do our best. I shared this perspective with my paramedic colleague and friend. I asked him if it were possible that his showing up, being present and caring to her, and holding her as she died might not have been the greatest service of all. I told him that I sensed that in her present living conditions that having someone who cared to simply be there when she passed meant she didn’t have to die alone and lonely. She hadn’t had the luxury to live well, but she died a good death in the arms of an honorable and caring person. I visibly saw the angst leave his posture, expression, and overall countenance. He replied with a look of wonder on his face, “I never thought of it that way.”

I can’t think of two works more theoretically foundational to understanding emergency responder psychology than The Meaning of Anxiety and The Denial of Death. Most crises, accidents and emergency situations are challenging because there is always some ambiguity. Becker says that we find ourselves heroic in our ability to transcend our physical conditions, if only in the moment. We have also constructed a culture that believes the lights, sirens, and uniforms translate into salvation has arrived. Much of the time, the work of emergency responders is efficacious. But sometimes our algorithmic processes, technical equipment, and well-practiced skills are not enough. From Becker’s perspective, our cultural structures and rituals fail the degree of trust that we have placed in them, which sets us back in a confrontation with our biological limitations. When that is the case, the interpersonal services are all that can make a bad situation better. Our social support of the people who summon us is sometimes all that we can give, but that is a very valuable service in itself.

Anxiety looms in the responder’s mind when he or she believes that he or she has failed or demonstrated incompetence. Being competent is essential to helping others and is part of the (heroic) identity of the firefighter, paramedic, and police officer. Feeling like a failure strips away a hero’s confidence and faith in his or her training, tools, and tactics. It makes his or her professional identity dubious by calling into question its seeming power over life and death. Of course, overconfidence is known to contribute to increased risk taking.

Rollo May teaches us that normal anxiety causes us to act and grow. We are spurred to get back to learning and training more. We find a new appreciation for practicing skills and coordinating with peers. On the other hand, pervasive and consuming anxiety can crush us into dysfunction in a variety of ways. One’s coming to understand anxiety and learn how to “dialogue” with it in our jobs helps us to pursue excellence in our work, but not have unreasonable expectations that feel like failures when they are not met. In the end, I think my paramedic friend found that he had not only transcended conditions, but he had simply been a hero in a way that he had not expected or even realized at the time.