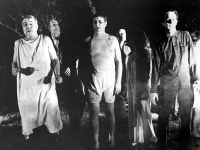 The current fascination with zombies and the Zombie Apocalypse seems to clearly reflect of some of the deep-seated concerns with American culture. In his book, Horror and the Holy, Kirk Schneider suggests that monsters often represent two human extremes: constriction and expansion. Dracula embodies Hyper-constriction (deadening qualities) as he sucks the life out of his victims. Frankenstein demonstrates hyper-expansion (deity-like qualities) since he has super-human strength and intelligence. These extreme possibilities present the opportunity for horrifying acts, and horror provides the potential for finding the holy. Perhaps, our reflection on zombies can reveal how we as a society are feeling hyper-constricted.

The zombie obsession makes us question whether Americans are living lives that lack passion and vitality. Zombies represent the spreading of the dead. After all, it is not one zombie that gets you, it is waves and waves of them that keep coming. A single zombie is slow and mindless; it would be easy to escape from it or even ‘disable’ it. But there is not just one—they are everywhere you turn. They surround you. There is a contagion of deadness that seems to spreads exponentially, and zombies pursue the living relentlessly. In this way, the zombie story is very similar to Philip Kaufman’s 1978 film, Invasion of the Body Snatchers. In this movie, alien pods come from outer space and make duplicate (but emotion-less) human beings eradicating the originals. Initially, most unchanged people don’t even recognize that their loved ones have been replaced with stoic alien doppelgangers. By the end of the movie, just a few people have survived and avoided detection by the body snatchers by basically displaying no emotions.

Zombies are, perhaps, also a comment on the anti-intellectual spirit of the Americans—as the slow, mindless dead eat brains of those who can still act freely. If it isn’t anti-intellectual, the zombification of society might show us we have a wisdom vacuum. Who are our American wise? What are the signs of this absence?

Our last three elections have turned into national shouting matches. Intelligent conversation during those years has been rare and most of the commentary is pure propaganda or spin. Followers of each party can seem like mindless “believers.” In addition, zombies point to our own mindless group activity since they appear to be working individually on the same project—every zombie for himself. When zombies attack a person inside a house, they each attack the house at different spots without coordination. When they attack a person, they come at a person one at a time. There is no cooperation; there is no teamwork. Maybe, the great morality tale of the zombie—that is, Schneider’s holy—is that individual uninfected groups can create their own sanctuary against the dead by banding together and using teamwork and a collective spirit to maintain their vitality. Fostering community might be the only way to beat the deadening conformity.

If zombies signify the spreading of a culture of death (or soul sickness) then it is not hard to find obvious parallels in our world. We could start with the news that begins with murders, deaths, and fires. The mind-numbing reality shows that fill our TV sets. Video games filled with senseless violence. Wars that seem to be justified more by marketing than any moral imperative. And, of course, there is the proliferation of mass-shootings such as the one in Connecticut and the countless prior shootings that have plagued this country. One consistent theme in many of the zombie movies is that the authorities are alerted to the problematic situation (the zombie outbreak). But, they either spend their time denying that this is possible (e.g., Global Warming) or they are too divided to respond quickly to the impending disaster (e.g., the Fiscal Cliff). A recent news story reported on a growing plastic garbage dump in the Pacific Ocean. The story concluded by saying there were no plans to clean it up, but there were a number of research teams planning on studying its impact!

Our colleges and universities can also be implicated in spreading the dead. College mission statements continued to emphasize “critical thinking skills” to the ultimate neglect of “creative thinking skills.” And what does critical mean but to tear apart, break down, and search for a weakness. In other words, critical thinking is meant to often criticize or to find holes in project—not to solve them. Creative thinking is less valued and less supported by our society. Whenever a high school faces financial uncertainty, the first programs that are threatened are the Arts. On a national level, funding for the arts—despite making up a miniscule amount of the national budget—was on the chopping block by one candidate because it was seen as wasteful spending. America has continued to follow Plato’s footsteps by emphasizing rationality as the highest human quality and devaluing those things, like the arts, that are emotionally elevating. Our children’s education promotes the rationality needed to do well on standardized testing, but it ignores the emotional value system that is necessary to put that education to good use.

It is quite possible that Psychology itself is infected with anti-life, anti-vitality perspective. Certainly, we have seen a change in our organ of envy. One century ago, Freud caused a stir writing by about “Penis Envy.” He suggested that little girls, in particular, wanted something that they didn’t biologically have and to some extent felt inadequate in the long run for not being complete. Today, the organ of envy is the brain. There is blossoming field of neuroscience that is attempting to find the place in it for every human thought, action and emotion. I am amazed at the number of times that I hear students directly address their personhood in terms of their brains. They speak about their brain as if it is an entity in itself. They’ll say: “My brain is full;” “My brain doesn’t work that way, it’s not hard wired like that;” “That lecture hurt my brain.” This brain-based reductionism has infiltrated the very core of our culture but, like the alien doppelganger, it is barely noticed.

Humanistic-Existential Psychology has been a beacon for the intuitive-emotional-creative cluster of human possibilities, taking the lead from philosophers like Nietzsche, who in Twilight of the Idols, combats the over-emphasis of the rational in western society. He claims that rational living is really a disguised hatred of life. Nietzsche doesn’t feel that rationality should be elevated to Plato’s charioteer, controlling and restraining the two wild stallions of emotions and the appetites. But rather, he sees that all three aspects of psychology are different ways of being. If we are going to truly live, we have to honor our whole being: thinking, acting and emoting. Each process is really not separate from the other. Thinking is already an action. You are spending some time thinking rather than mowing the lawn. Thinking already contains an emotional quality—we immediately feel interested or bored by thoughts. Thinking can give us physical sensations such as chills or an emotional elevation that sometimes causes an epiphany. Some thoughts can also depress us. In other words, thinking is not something that occurs just in our BRAINS!

It is appropriate to end with an artist’s words since we have claimed that Humanistic-Existential psychology promotes creativity and artistic thinking. The singer/songwriter Tom Waits has a song called That Feel. In it, he describes the fight against the deadening of life. Zombies are not part of the song, but the feeling that we can’t lose—the one the zombies have lost—is the feeling of vitality, passion and aliveness. He sings:

There are still pockets of creative “survivors” out there. I hope to meet some of them at the Division 32: Society for Humanistic Psychology Conference held at Pacifica Graduate Institute in late February!