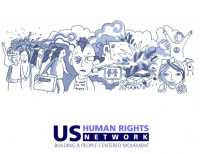 The United States continues to offer an unrealized promise of human rights. The 2012 Status Report explores the way that powerful economic interests threaten to undermine our democracy, and how most of our political leaders appear unable or unwilling to stop it: In these times of economic uncertainty, we need to be especially vigilant in protecting human rights starting here at home. There are 46 million people living in poverty in the United States, and most of them are women and children. People living in poverty  are particularly vulnerable to human rights violations, and have the least access to power to ensure that effective policies are in place to prevent and remedy violations of their rights. The war on drugs, now three decades old, has resulted in the vastly disproportionate and unjust targeting and incarceration of poor African Americans and Latinos despite evidence that these groups engage in criminal drug activities at similar rates as their white counterparts and use drugs less.  Anti-immigrant sentiment, racial discrimination, and economic stress have  encouraged the vilification of undocumented immigrants and unprecedented detention and deportation of documented and undocumented immigrants alike, especially those from the global south. Workers find themselves undermined and under attack by politicians and wealthy employers throughout the country. The ongoing war on terror has led to  the  demonizing of Islam and an atmosphere of open bias against  Muslims including sometimes by elected officials. Women, and in particular poor women of color, have seen their reproductive rights attacked with the country turning the clock back on access to contraception.  Despite recent gains on same sex marriage,  LGBTQ persons continue to be denied basic human rights to marriage and family. And the misuse and desecration of Native American land persists.
However, as the Status Report also indicates, there is a vibrant and growing movement afoot and communities are fighting back to protect the human rights of  all  people living in the United States.  They  are challenging the notion that human rights violations are primarily a concern of other countries. They reject the implication that there are people who are undeserving of human rights.  They are working across movements and building power from the grassroots to ensure that people are always prioritized over profit. They are demanding that the United States live up to its founding values as a nation, which holds that all people are created equal. This idea—the inherent dignity of all human beings—is the basis of the human rights movement.