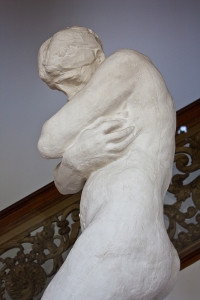 Rodin’s Eve After the Fall

The experience of shame is universal. As social creatures, humans desire connection and a sense of belonging. Each social group to which one belongs has established, often implicitly, certain standards of behavior or ways of being that are deemed acceptable. Transgressing these moral codes of appropriateness threatens expulsion or censure from the group. The desire to be accepted by others opens one towards the possibility of disconnection. This inherent vulnerability in relating to others fuels the potential for shame.

The word “shame” can be traced back to the proto-Indo-European word kem, which means to cover. We experience shame as a particular kind of covering over or hiding of those aspects of ourselves that are perceived to be inferior, unworthy, or morally unacceptable. The power of shame rests in the threat of social disconnection if others discover these perceived flawed parts of one’s Self. When shame is mobilized, we defend ourselves by seeking to be invisible or small, or omitting parts of ourselves or our experiences for fear of being exposed and cast out. Shame, therefore, functions to protect these vulnerable aspects from being revealed.

Within the context of psychotherapy, shame is usually understood in terms of the patient’s own sense of it that may have originated from such life events as surviving a trauma or battling an addiction. These experiences certainly contribute to how a patient comports him or herself towards the therapist and treatment. However, another element of shame that appears to go unnoticed involves the ways in which shame operates in the “real” relationship between the therapist and the patient.

It seems the opportunity for shame increases with asymmetrical relationships where there is a power differential between two people. This can be particularly pronounced in relationships such as between a therapist and a patient (or supervisor and supervisee) where there is a strong desire on the part of the patient to be accepted by the therapist. Such a desire places the patient in a more vulnerable position and is therefore perhaps more susceptible to the subtle ways in which shame can be used to shape the specific contours of the therapeutic relationship.

The development of the therapeutic relationship occurs through a socialization process that is unique to each therapeutic dyad. This socialization process is heavily influenced by the therapist’s own style and way of working that structures the general parameters of how a patient should act, what is acceptable to talk about, and the manner in which such material can be discussed. From a phenomenological perspective, this socialization casts a horizon from within which a space is cleared for the patient to reveal different aspects and experiences of him or herself. In this process, the patient learns from the therapist the valued ways in which he or she can show up within the therapeutic encounter.

To maintain this working alliance, I believe, therapists (myself included) often unwittingly use a nuanced form of shame, often on the level of micro-invalidations, to guide patients to stay within the constructed parameters of what are deemed to be the appropriate ways of being and expressing one’s Self.

For example, when a therapist consistently does not take seriously the concrete concerns a patient presents, in favor of interpreting its transference implications, this emphasis may have the effect of communicating that such concerns are unworthy for discussion. Feeling dismissed, yet desiring to be accepted by the therapist, the patient may capitulate to this interpersonal demand and cover over those aspects of his or her experience. This subtle way of shaming sculpts the intersubjective field and truncates the possibilities of what can be revealed in the therapeutic process.

The privileging of certain material is an inevitable part of psychotherapy; it is a perpetual ebb and flow of revealing and concealing. However, not being cognizant of ways our actions as therapist may elicit the patient’s shame may cause undue harm. Being alert to the possibility of shame operating within the real relationship can sensitize therapists to explore why certain aspects of the patient’s experience remain covered over. In this context, resistance may reflect a patient’s shame induced by the therapeutic relationship as opposed to a purely intrapsychic conflict, and making such distinctions seems critical in determining how the therapist supports the client through this journey.