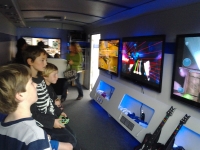 “There is nothing which requires such gentle handling as an illusion.” –Søren Kierkegaard

I have been raised to believe in honesty, that we don’t cheat—ever—and that our word, when given, is binding. These values are very strong family values that I wish to instill in my own children. However, lately, I have been wondering if those values are a thing of the past—an illusion.

As I think about the quote from Kierkegaard, I wonder if the values that are set forth in our society are also an illusion. Could it be that those same values that I had been taught and that I am teaching my children are nothing more than an illusion? All around us are examples that would seemingly disprove those age old traditional values. It makes me wonder if Martin Heidegger understood more than he actually revealed in his writings about the shadow side of technology.

Please don’t get me wrong. I do love technology in all of its glorious forms. I love that I can walk downstairs after a good night’s rest to the wonderful smell of fresh coffee brewing without me doing anything. I love my smart phone that keeps me intimately connected with those I love through email, Facebook, texting, and “Words With Friends,” which I play with colleagues. My car gets me comfortably from place A to place B on a cold rainy day or to a much anticipated Thanksgiving with my beloved family members who live far away. The television, complete with surround sound, is a wonderful addition to our family nights where we watch a movie while munching on snacks—some created in the all-convenient microwave. And, on cold wintery nights, we can turn on the wonderfully warm and cheery fireplace with just the turn of a gas key. Technology is wonderful!

One example is with our recent Presidential election. No matter which way you voted, the attention the candidates garnered on the night of the debates could not be ignored. Both were called out on falsehoods. Whether you believe those statements to be true or false is not the question. Perhaps some of them were true and others not. The question was: how did they learn that “value?” We may never know the answer to this. However, it did create in me a curiosity to explore the potentialities in our societal value system.

I went to the grocery store shortly after this and observed a family with a son about nine years old and a teenage daughter approximately 16. They were very well dressed, indicative of the area in which I live. They were carrying a basket of various items. The girl wanted an eyeliner to which her mother said “no.” I watched as this girl put the eyeliner in her back pocket while putting the blush in the basket. And, I wondered.

That evening, I took my smart phone out to re-add my game after having had my phone factory reset. My son, a techie, had always done this for me and so I thought nothing of it. When I went to the application settings to download the game what I saw was utterly shocking. There was my beloved game to download, which I happily did. Loving words, I decided to see if there were any other game applications in which I might be interested. What I found, were no less than four other applications that were “cheats” to my words game downloadable for free. I found another word game that I downloaded, “Scramble With Friends,” similar to the game “Boggle.” And, I found “cheats” to that game as well. Yes, downloadable for free. My mind swam in thoughts of disbelief. The question resounding in my mind: “What are we teaching our children?”

As the days progressed, I ran across several other examples like the two mentioned above. I was shocked at the belatedness of the “illusion” of my world. I watched as a company that stated they will do one thing and then, halfway through the process, decided otherwise. And, the company sees nothing wrong with that, calling it a “re-negotiation.” I am shocked too when my daughter turns on the television to watch “teenage” shows from “reputable” companies like Disney and Nickelodeon, and what she watches is “bullying.” I wonder if parents know what their favorite children’s television programing is offering their children—and what the children are learning. When many individuals seemingly are “out for themselves” and have forgotten that they are a community. I wonder again about our societal values.

I believe what Heidegger taught—that technology will turn out to be an addictive thing, that we will not have a choice unless we are mindful of it. Technology is something to be dealt with, understood and integrated in an ethical way throughout our society. I am hopeful that technology, which offers such wonderful new ways of living, which brings about such luxury and leisure in such engaging, connective ways will become a tool used to instill the old familiar ethical values—a mixing of the old with the new.