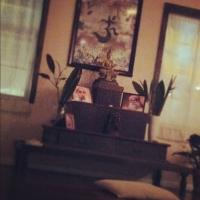 Anyone who knows me knows that I’m a Zen-seeker.

I enjoy temporarily turning off the rigid, left-brain linearities of my MBA, academia, and journalistic writings for the sake of finding inner harmony and balance through meditative practice. For me, this practice is as simple as sitting quietly for five minutes without engaging any lingering thoughts or old worries. It just involves sitting still, breathing, and trying not to think. That’s all.

While I’ve always tried meditating in some way or another, I’ve been more serious about this practice during the past two years. And it’s been very beneficial. It’s given me much more patience and it’s made engaging with others a much richer experience.

In the past few weeks, though, I’ve been feeling a little stuck. Despite my ongoing, Zen-seeking efforts, I can’t seem to reach peace of mind or that calm inner stillness the way I did earlier this year. And I’ve blamed everything for this setback—the two 30-page pre-candidacy essays I’m writing this term for school; my editor for pushing me to give simple 800-word articles more depth and flourish than he pays me to; and all the experiences (hectic, dubious, and unfair, just to name a few) that I’ve had on my personal and journalistic journeys this year that I just can’t seem to flush out of my mind.

Of the three examples I noted, the latter’s the most troublesome. It’s the experiences I’ve had with others—the hectic, the dubious, and the unfair—that I just can’t seem to wean out of my system weeks and months after they happened. These experiences aren’t replaying in my mind in full detail, thankfully. Instead, it’s as if their residual effects and influences continue to irk me, and I just can’t find a way to release these feelings once and for all.

I think I finally hit a breakthrough last night when I drove out to Miami Beach to take part in a meditation circle. I first attended this group during the summer months, but I hadn’t driven back out there since late August because, in the weeks that followed, I had joined another group that’s closer to home. I felt inclined to head out there yesterday because the circle was going to take place on the beach beneath the lush full moon, and it’s great to head to the beach on a Wednesday evening. It’s so out-of-the-ordinary, it’s refreshing.

When I drove into Miami Beach, it started to rain and, even though I had considered leaving, I decided to stay. And I’m glad I did. Lorraine, the woman who leads the circle, always begins with a discussion about spirituality and, last night, she hit the nerve that’d been pinching me for weeks—lamentation over past experiences and relationships.

“Think of the relationships you had 10 years ago that felt important at the time,” she said to the group. “Show of hands: how many of you can say that many of those relationships are no longer important to you today if they even exist at all?”

Several group members raised their hands, including me.

Lorraine explained that we each continue on our individual journey as relationships that no longer serve us fall away. She spoke in more spiritual terms but, tying this theme to systems thinking, our individual learning guides us away from many of these relationships as our perspectives change and growth takes place. We’re not tethered to others indefinitely; this shift is just a natural part of life, she explained.

So why was I bent on making the influence of defunct relationships pertinent to my existence now? I mean, I’ll be honest, I’ve been feeling like a ghost that’s just hanging around trying to resolve it’s unfinished business lately.

I reflected on Lorraine’s discussion this morning and Martin Buber’s book I and Thou came to mind. According to Buber, “all life is encounter” and, in his book, Buber discusses how one relates to others by engaging genuinely with others or, by contrast, objectifying others—merely using them as a means to an end.

I think that last part’s what’s been bugging me. The more I’ve looked back, the more objectified I’ve felt by the experiences I had with others and that, in turn, made me objectify them back, even if my objectification was based on hindsight. Buber called the objectification of relationships the “It” world, where people are viewed and treated as objects.

“The It-world hangs together in space and time,” Buber wrote. “When man lets it have its way, the relentlessly growing It-world grows over him like weeds, his own I loses its actuality, until the incubus over him and the phantom inside him exchange the whispered confession of their need for redemption.”

Buber’s description is much darker than I like, but he accurately captures the feeling of being objectified and of objectifying others quite nicely—it’s a hollow, empty, abandoned feeling.

So don’t do it. Don’t engage that behavior. That’s probably what Buber would say.

Lorraine told the group to avoid that kind of thinking by bringing the focus back to the present moment and paying attention to anything that sparks happiness, like the sunset, for example.

In essence, I think the message in Lorraine’s words and Buber’s writings are pretty straightforward: If you’re going to make meaning of relationships, make it meaningful in a positive way. Don’t dwell on patterns that lead you down a rabbit hole of gloom and short-sightedness and objectification.

Lorraine’s words and Buber’s writings have really helped me shift my thinking. I know I can’t concentrate on what was because that can’t be changed, but it can alter my perspective negatively if I allow it to sabatoge the present moment. So it’s clear: I need to stop allowing and engaging that.

There was one other thing Buber wrote that also intrigued me: “Near the bottom of the ladder is journalism: a steady stream of irresponsible distortions that most people find refreshing although on the morning after, or at least within a week, it will be stale and flat.”

Now there’s something I should tell my editor the next time he requests more depth and flourish than necessary… or maybe not.