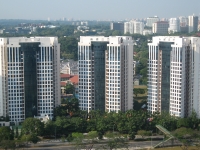 I have recently encountered two deaths: one of a nanny who cared for me as a child from the age of 7 to 10, and an uncle from my church who I had interviewed last year in the production of a video meant as a remembrance of their lives and their strength in overcoming many curveballs.

My nanny had always been known as “Ninth-floor auntie” as she was our ninth-floor neighbor in my block of public housing in Singapore. The majority of us in Singapore live in high-quality, organized, and clean public housing projects that we own. We lived on the 7th floor, and when I was a child, it was a common practice for parents to send their children to “carers” in the neighborhood. These carers earned a stipend in return for taking care of the children while their parents went to work. In competitive Singapore, not all parents choose to put their careers on hold solely for the purpose of child care-giving, and these carers often earned income for their own families by honing their skills in caring for the children of others in the daytime. I had never actually known “Ninth-floor auntie’s” real name until I visited her wake.

She was my third and final such carer in my short 10 years of existence up till then, and perhaps because I was a little older when I was in her care, I have many enduring memories of her. I can almost still hear the jingle of the radio station she listened to every day. I can smell the distinctive aroma of her cooking. I remember the lingering sweetness of the delicious chicken she would roast for my family from time to time, and how she would always make her specialty dish of stir-fried rice noodles every time we visited as we grew older. I remember seeing her flipping open a big red book every morning, and only as I grew older did I know that the big red book was her Bible, a Chinese translation.

By and large, I was a good kid. (Hey! I was!) But there were also times I did very naughty things unknowingly. Two incidents stand out in my mind. Once, I accidentally pulled on a stick hanging from a large vase in her house and it came crashing down smashing into smithereens. On another occasion, I remember her husband lying down on the floor to sleep after a night shift at work, and I pretended to sweep the floor. In the process, I “accidentally” also swept his face with the broom. Now, to the Chinese, that is almost equivalent to cursing that person with bad luck for life, although as an eight-year-old, I had no understanding of this at all. Both times, my nanny was incredibly calm, cleaning up the mess I had made and reserving her reprimand for the evening when my parents came to pick me up. Sure, I got huge thrashings from my own parents then, but nanny was firm without ever harboring a harsh word.

We last visited Nanny in February this year over the Chinese New Year. That was when we had heard of her diagnosis of cancer; even then her tone was calm, measured and peaceful. Caught up in our own busyness-es, we didn’t contact her in the following months and only heard about her when she had passed on. Unknown to us, she had spent her last weeks in a hospice. Much of my nanny’s life was spent in a gentle simplicity, but it was in her last few weeks of weakness in which she truly showed her tenacity in living gloriously.

We had heard in the eulogy that nanny’s health weakened significantly in her last days; beneath her smiles, her photos betrayed a dramatic loss of weight. Yet, in these days, she reserved her best moments of the day when she was least weak to walk around the ward and chat with other terminally ill patients. Carrying her hymn book and Bible with her, she sought to share a piece of the peace she had with others. Palliative care also meant that she and her family had much time to spend their last moments together. Plans were made, and aspects of her eventual funeral were ascertained. She chose her favorite hymns to be sung.

And when I attended the funeral, strangely, there was little sadness but an atmosphere of calm and joy hung in the air.

Another uncle whose health was similarly ravaged by cancer deteriorated rapidly in a span of only five weeks. I had interviewed him and his wife for a DVD project on their life story just last year, and this family really did have to go through very very tough times. Yet, they stuck together, refusing to allow their relationship to descend into the cycle of blaming and defensiveness as it so easily can.

Although his deterioration was rapid, he somehow knew that maybe his time was up. Instead of struggling, he called his wife to his bedside in what was to be one of his few last words. “I love you very much,” he whispered in her ear with his last burst of breath. And then he passed on with much peace.

Existentialists talk a whole lot about living a good life. We debate, discuss, and dialogue about what the good life really means. In the midst of these debates, we sometimes forget that dying well is also a part of living well. For life includes those very last moments as well.

And so for my nanny and this uncle, I learned much about their lives only when they had ended. Yet, it was in those last moments in which their living was most glorious. Their courage to live, to express, and most of all, to love, moves me. It reminds me that my life, too, will someday come to an end. And for a young man such as myself preparing to get married next year, it further confirms in my heart that my fiancée is the lady I want to spend the rest of my life with. It reminds me that one day, I too, will leave behind loved ones in the same way. It prompts me to ponder the parting gifts I want to leave behind. Like Irvin Yalom shares, the physicality of death destroys us, but the idea of death, truly does save us.

My nanny and this uncle have run the race well; they have finished it. In facing their final mortality with courage and choosing to love with resolve, I doubt if they could have left better parting gifts for us, the living.

“The final reward of death is that we die no more.”
— Nietzsche

Today’s guest contributor, Zheng Liren, is a social worker and guidance counselor in Singapore, who stumbled upon Existential Psychology after picking up an Irvin Yalom and a Viktor Frankl book in a local library and hasn’t been able to put down existential writings since then.