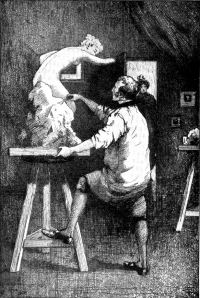 Illustration from Balzac’s 1842 A Bachelor’s Establishment.

Our understanding of psychotherapy has traditionally focused on the interplay between theory and technique. In practice, however, as is often the case, a gap emerges between these two concepts. The persistence of such a gap suggests our conventional schema for understanding the practice of psychotherapy may be obscuring a more basic and immediate engagement in the therapeutic encounter. The pre-Socratic sense of poiesis may offer a more accessible way to understand what occurs in the activity of psychotherapy.

In its broadest sense, poiesis, refers to a bringing-forth, the “bursting of a blossom into bloom,” as Heidegger described it. In contrast to a technical proficiency, poiesis is associated with the artful skill of master craftsmen who use their practical and embodied knowledge to work with their craft to bring out its best qualities. It is the craftsman’s skill that facilitates an opening that clears the way to see meaningful distinctions and determine what is worthwhile. By recognizing the uniqueness of each situation, the craftsman is able to create each craft by revealing its most desired possibility of being. In this sense, the poietic is the site where Being is disclosed as it is brought-forth into presence.

Within the domain of psychotherapy, therapists work with their patients to open a space from which new possibilities may emerge. Poiesis, however, is not merely a making the unconscious conscious, or generating new narrative meanings, or unveiling universal truths, but rather is working with the patient to bring-forth his or her own possibilities of Being-in-the-World. These possibilities are constrained, in part, by the patient’s own skills, which illuminate a clearing that either enlarges or restricts what can be experienced within the patient’s world. The sheer number of possibilities is generally inconsequential as not all possibilities are of equal worth. What matters is how patients craft the possibilities of their own life in a meaningful fashion.

Herein is the artistic act of psychotherapy. Art can be said to organize and focus meaningful possibilities to reveal that which is significant. In this manner, we can construe psychotherapy as the art that works to bring-forth that which matters most with respect to the patient’s own possibilities of being. The activity of psychotherapy creates a context that supports one’s return from being lost back to one’s own Being. Through this process, an understanding of the for-sake-of-which one exists emerges and is disclosed. Coming into a more intimate relationship with Being reveals what is significant and sensitizes the patient to ways in which the patient crafts his or her life to be the patient’s own. The poietic element of psychotherapy can therefore be characterized as helping a patient bring-forth a more authentic life.

This more ontological understanding of the activity of psychotherapy can be viewed as an emergence in and refinement of a poietic dimension of life. By highlighting the poietic, therapists can move pass the abstractions and uniformity inferred within the schema of theory and technique and move closer to the actual creative, living moments that comprise the therapeutic encounter.

The idiosyncratic nature of such an encounter requires a responsiveness akin to the artistry of a master craftsmen as opposed to a proficient technician in order for therapists to bring out the best qualities in their craft to facilitate being-with the uniqueness of each patient. In a similar fashion, just as the therapist engages the poietic through psychotherapy, so too the patient cultivates the poietic within his or her own life that ultimately transforms how the patient sees and experiences the world.