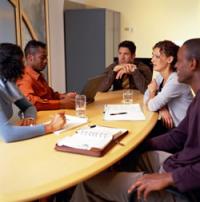 The development of organizational culture is a tacit, ongoing process that happens within organizational systems all of the time—from non-profits to large corporations, from religious institutions to political systems. It’s a process that eventually shapes and defines a group’s unique identity.

In positive work environments, leaders are encouraging rather than dictatorial, group work is collaborative rather than competitive, evaluations and feedback are typically informative rather disciplinary, and goals are used as benchmarks that encourage creative performance instead of measuring sticks used to determine whether a salary increase is merited or not.

Negative organizational cultures, on the other hand, create a climate that stymies creativity. In these environments, there may be “an emphasis on the status quo, a conservative, low-risk attitude among top management, norms of harshly criticizing new ideas, political problems within the organization, and excessive time pressure,” according to Zhou and Shalley.

A negative organizational culture is best represented by a reinforcing loop that shows how increasing tension within the organization increases hostility and negative perceptions, which decreases or blocks creativity. Consequently, as organizational creativity drops, so does a leader’s ability to positively influence organizational culture. This work setting’s climate is rife with what authors Paul B. Paulus and Bernard A. Nijstad described in their 2003 book, Group Creativity: Innovation Through Collaboration, as “conditions that limit feelings of autonomy [and] limit the extent to which individuals are motivated for creativity.”

All reinforcing loops depict what happens when behaviors reinforce one another. If the behaviors of a negative work environment continue in this negative, reinforcing spiral, conditions won’t improve. They’ll actually continue to get worse and its manifestations may be in the form of a high turnover rate or the frequent replacement of top management in an effort to “reinvent” the organization.

While a positive work environment can also be depicted by a reinforcing loop, the outcome of the repeated behavior won’t hurt creativity; it’ll actually strengthen it. According to Zhou and Shalley, in organizational cultures where the work environment feels positive—where bosses are supportive and colleagues are helpful—there is a sense of:

…freedom in carrying out the work; a sense of positive challenge in the work; work teams that are collaborative, diversely skilled, and idea focused; supervisors who encourage the development of new ideas; top management that supports innovation through a clearly articulated creativity-encouraging vision and through appropriate recognition for creative work; mechanisms for developing new ideas; and norms of actively sharing ideas across the organization.

As this positive behavior self-reinforces, it continues to enhance creativity over time.

Based on the research, it’s safe to assert that the amount of freedom, support, and stimulation workers receive from leaders and colleagues every day greatly affect the flourishing of a worker’s creative capacity in the workplace.