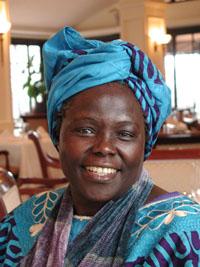 An article posted on the Green Belt Movement website described the late activist Wangari Muta Maathai as a Nobel Peace Laureate; an environmentalist; a scientist; a parliamentarian; a founder of the Green Belt Movement; an advocate for social justice, human rights, and democracy; an elder; and a peacemaker. Maathai lived and worked in Nairobi, Kenya. She died last September at age 71.

In 2004, she became the first African woman to be awarded the Nobel Peace Prize for her efforts in the plight for sustainable development, democracy, and peace. “Maathai stands at the front of the fight to promote ecologically viable social, economic and cultural development in Kenya and in Africa,” the Nobel Peace Prize Committee noted in 2004. “She has taken a holistic approach to sustainable development that embraces democracy, human rights and women’s rights in particular. She thinks globally and acts locally.”

In their 2002 book, The Balanced Company: A Theory of Corporate Integrity, Muel Kaptein and Johan Wempe described a person who acts with integrity as “…first and foremost autonomous and authentic: he or she stands for something, strives for something, and is true to his or her ideals…. Integrity stands for a wholeness of motives…. A person of integrity accepts responsibility for themselves, for what they do, and what they have done. They rarely appeal to the external forces to explain or justify their behavior. The norms and values of a person of integrity flow forth from the individual and determine his or her character. The norms and values of a person of integrity are autonomous and authentic.” Throughout her life, Maathai consistently demonstrated that she was a leader who acted with integrity regardless of the state, agenda, or actions of “external forces.”

I imagine that Maathai’s “autonomous” and “authentic” nature, norms and values enabled her to cultivate a deep sense of purpose and conviction for what she stood for—social equity and justice for all; respect for and conservation of the natural environment; peace; human rights; and democracy, among others. Her life’s work reflects an acceptance of responsibility for her role as steward and leader for the causes she so passionately championed even in the face of state-sponsored brutality and violence.

“Maathai stood up courageously against the former oppressive regime in Kenya,” the Nobel Peace Prize Committee further noted in 2004. “Her unique forms of action have contributed to drawing attention to political oppression—nationally and internationally. She has served as inspiration for many in the fight for democratic rights and has especially encouraged women to better their situation.”

Maathai was a leader of extraordinary character, vision, and integrity. Her disposition aligns with Kaptein and Wempe’s characterization of people with integrity by being in a state of “integral integration,” where words and deeds conform, and “external integration,” where social issues are acknowledged on a personal and global scale.

Growing up in Kenya, I watched media reports concerning the public vilification and abuse Maathai endured from the regime of former Kenyan President Daniel Toroitich arap Moi. Many of us remember an extremely disturbing image of an assaulted Maathai after the police had brutally manhandled and evicted her and others from the site of a hunger strike that they were participating in, demanding the release of political prisoners. In this image, some of Maathai’s hair had been plucked out of her scalp and blood was dripping down her face.

“Every person who has ever achieved anything has been knocked down many times,” Maathai once said. “But all of them picked themselves up and kept going, and that is what I have always tried to do.”

Maathai was an exemplary leader well ahead of her time with a purpose and voice that some in Kenya were not ready to accept, particularly because she was a woman who courageously spoke out against injustices by the political establishment. According to Wikipedia.org, in 1989, “President Moi suggested Maathai be a proper woman in the African tradition and respect men and be quiet.”

Kaptein and Wempe would probably disagree with Moi’s suggestion. They wrote that a person with integrity remains true to themselves in trying situations. “It is exactly in situations like this that integrity materializes,” the authors wrote. “A person with integrity does not have the split in the timber which would cause him or her to break under pressure.”

Maathai’s leadership and life work was continually affirmed in action—fearless action that places her at the top of the ranks of leaders with integrity and social responsibility. Maathai is a role model ethical leader that continues to deeply inspire me and many people across the world, encouraging us to do the best we can, which is best reflected in the story she often told about the humming bird. Rest in peace, Professor Wangari Maathai! We miss you.