This past September and October, Prof. Kent delivered lectures in five different cities, based primarily on his recent books Ending Hunger Worldwide, and Regulating Infant Formula. His lecture tour began in Norway with an invitation to speak at the University of Oslo’s Centre for Development and Environment, with talks entitled “Deepening Poverty and Ill Health with Infant Formula” and “Ending Hunger Worldwide: Changing Perspectives on Food Insecurity.” From Oslo, Dr. Kent traveled to the University of Ghent and Belgian Health Ministry; Corvinus University in Budapest, Hungary; Coventry, UK and finally back in the U.S. at the University of Connecticut (Storrs) delivering talks on similar themes: how to remedy social problems related to food security and nutrition. 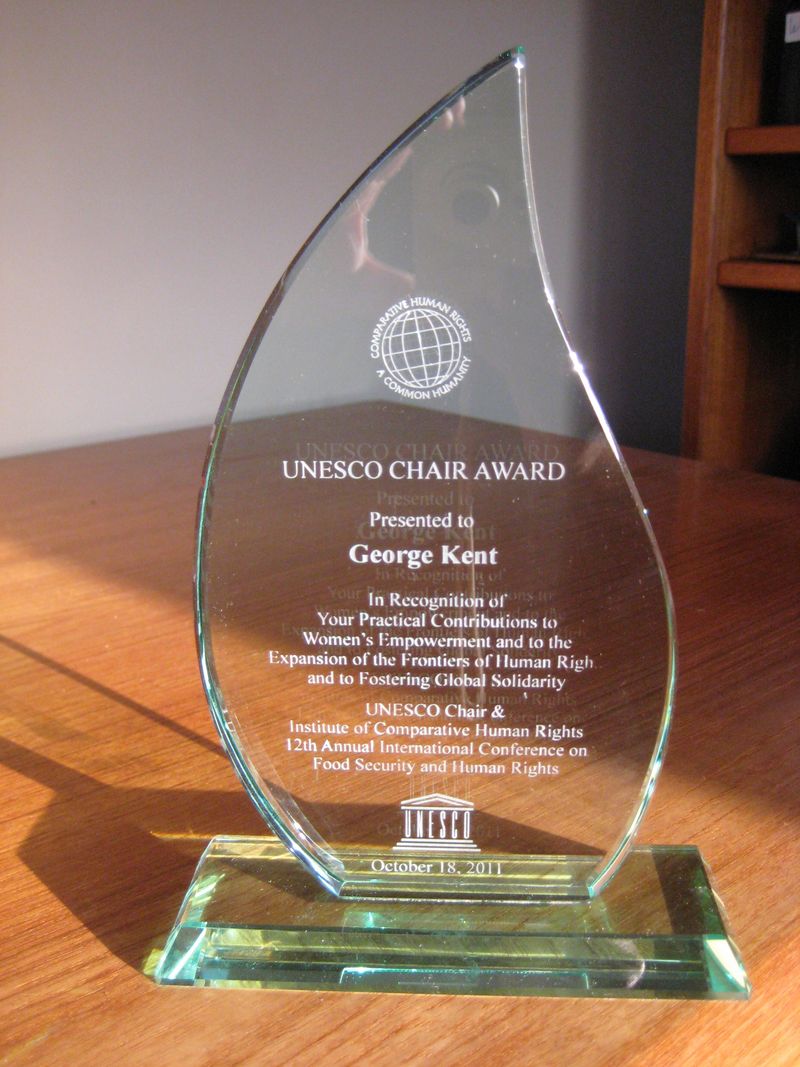 At the University of Connecticut, Prof. Kent received a plaque recognizing his work. It reads:

“UNESCO Chair Award. Presented to George Kent. In recognition of your practical contributions to women’s empowerment and to the expansion of the frontiers of human rights and to fostering global solidarity. UNESCO Chair & Institute of Comparative Human Rights. 12th Annual International Conference on Food Security and Human Rights.”

Upon return to his home in Honolulu, Dr. Kent was invited to speak to the University of Hawaii’s Law School, its School of Public Health, and its Department of Urban and Regional Planning.

Currently he is working on a paper called “Rights-Based Disaster Planning,” which will be the basis of talks he has been invited to share this coming February at the East-West Center in Honolulu, and at a conference in March for the Pacific Rim International Conference on Disability and Diversity.

The New Zealand Lactation Consultants Association has requested Prof. Kent lecture in three cities in mid-2012. Additionally, as Co-Convener of the Commission on International Human Rights of the International Peace Research Association, he plans to participate in its meeting in Japan in November 2012. These trips to New Zealand and Japan will be Prof. Kent’s 93rd and 94th international trips, representing a lifetime of work dedicated to empowering the most marginalized people.