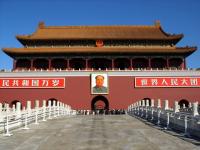 In 2008, I flew to Beijing, China, at the invitation of a friend who had arranged my hotel accomodations. This particular trip—my first in a series of several business trips to China to work on consulting projects in the year that followed—coincided with China’s National Day, which is celebrated on October 1st.

When I arrived in Beijing after the long flight from San Francisco, the hotel refused to honor my reservation. I was told that I was a foreigner and the police had forbidden the hotel to host foreigners during weekend of the national celebration.

We scrambled to find another hotel and found one fairly far from my friend’s office. So we trekked over to check it out.

It was a simple Chinese hotel; none of its staff members spoke English. This proved to be a formidable challenge for me. Even with my phrase books and dictionaries, it was very difficult to make myself understood. I ran out of potable water when all stores were closed, and the hotel staff wouldn’t sell me any drinking water. It was a tough moment for me—seasoned traveler that I am—in a strange city, unable to speak the language, and unable to find drinking water.

Beyond the personal challenges, the National Holiday was a closed, politically-charged and militarily-protected holiday. I learned that travel to and from the autonomous region of Tibet was prohibited as was travel from Xinjiang, which is home to the Uighur Muslims. Strict restrictions and arrests to stifle protests in both areas were occurring during my stay in Beijing.

I took the subway downtown to walk around Tiananmen Square, which was closed to the public for the October 1st parade, as a tourist with my camera. There were heavily armed teams of military men in black uniforms on practically every corner. Somehow, they didn’t inspire confidence or encourage casual tourism, and I found the atmosphere one of control, excitement, and threat. I decided to return to the hotel by taxi, but the taxi driver refused to take me to my hotel and dropped me off somewhere south of Tiananmen Square.

I made it back to the hotel and, the next morning, I watched the National Day Parade on television from my hotel room. It was awesome, beautiful, and frightening, with extraordinary displays of patriotism from children, schools, and, of course, the military. The display of military might was chilling. There were thousands of missiles, tanks, and modern weaponry on display. Tens of thousands of men and women soldiers marched in perfect step. The heavy investment the Chinese government has made to develop China’s military might was obvious and on display for the world. Hu Jin Tao spoke of the progress the country had made and of the need for everyone to participate without dissent. He reminded the people that opposition would not be tolerated.

As we do business with China, China’s attractive and economically prosperous exterior is a veneer over a political system that disregards human rights and civil liberties. There are several layers of oppression. The U.S. engineer and inventor who travelled to China to help build catalytic converters to reduce toxic emissions from automobiles is one example. This engineer ended up in a Chinese jail for 17 months. After his release, Chinese authorities refused to allow him to return to the US. According to news reports, several business entrepreneurs have been jailed over the years, including one who was executed.

The corporations, the government, and politicians, should put a little more pressure on the Chinese government. We are losing jobs and homes in the U.S. Business is going somewhere else—it’s going to China.

How can corporations become more aware of the suffering in the products that are manufactured in China? They don’t know. People don’t know these things. If people in the U.S. knew about how things were made in China, that would be a good thing. The corporations only care about business, they don’t care about human values.

Taking a broader perspective, His Holiness the Dalai Lama addressed the importance of China’s role in the world and the need for a free and democratic China. This month, the Dalai Lama took part in the signing of the Prague Declaration, which calls for “a more open, free and democratic China is of great importance for Asia and the world as a whole.”

The declaration stresses China’s need for human rights, democracy and the rule of law, citing that these values are the foundation of a free and dynamic society and as a source of unity and stability.

From a systems perspective, everything is interconnected and small actions in one area ripple through the interconnected systems. The economic fate and future of the U.S. is highly interconnected with China. As humanistic scholars and business leaders, the world needs our help in providing strong advocacy and action that protects the innate dignity and worth of human beings.