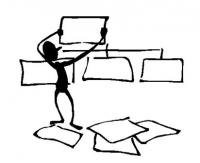 Three organizations I work with are undergoing restructuring. In one case, the company is being acquired. The other two organizations are spinning off divisions to create new publicly traded companies.

I have firsthand experience of working for a company that’s being spun off. I was a human resources director when PepsiCo divested itself of Pizza Hut, Taco Bell, and KFC creating a restaurant company now known as Yum! Brands. There are rumors that PepsiCo may be at it again; financial blogs are buzzing about the possible spin off Frito Lay.

A lot of lives get disrupted during a restructuring. Even employees who have been assured they will still have a job when things calm down can feel as though they’ve lost their moorings.

Leaders have a special responsibility in turbulent times to keep people focused on their responsibilities while providing as much stability and safety as possible. A restructuring can be particularly hard on leaders for two reasons:

To ease transitions during times of organizational upheaval, leaders would do well to brush up on the concept of “loss aversion.” In a 1991 article that appeared in the Journal of Economics, Amos Tversky and Daniel Kahneman reported on research demonstrating that our choices are influenced to a greater extent by consideration of what we might lose than by consideration of what we might gain. “In human decision making,” Tversky and Kahneman wrote, “losses loom larger than gains.”

In How We Decide, Jonah Lehrer described a loss aversion experiment conducted with two sets of participants—one set with normal functioning brains and the other set made up of neurologically impaired patients who no longer experienced emotion. As predicted by loss aversion, the normal functioning group made investment decisions consistent with a fear of loss; and, as it turned out, not ideal for maximizing gains. The neurologically impaired participants, on the other hand, out-performed the normal functioning group presumably because, Lehrer pointed out, they “…proved much more resistant to the misleading effects of loss aversion.”

In his 1991 book, Managing Transitions, William Bridges wrote about the human experience of change. He noted that loss aversion is a salient feature that consists of the decisions and change we anticipate. Bridges used the term “transition” to contrast the psychological process of change to the way in which we typically conceptualize change as an event with a before and after. Bridges wrote, “Situational change hinges on the new thing, but psychological transition depends on letting go of the old reality and the old identity you had before the change took place.” Bridges described the emotional experience of transition as a path curving through three stages: The Ending, The Neutral Zone, and The New Beginning.

The negative emotions associated with the first stage of a transition are a robust manifestation of loss aversion that many of us can identify with. Since information about change doesn’t flow evenly throughout the organization, people at different levels in the hierarchy find themselves at different stages along the transition curve. As communication cascades through the chain of command, the gap in emotional states between levels exacerbates feelings of mistrust and instability. At this point, senior leaders are touting the benefits of the change to an audience that is not ready to appreciate any potential upside. As a result, one tends to hear statements from senior leaders, like “the train’s left the station” or “we’re not here to complain about the change, we’re here to develop an implementation plan.”

Leaders become impatient because they not only get information sooner, they tend to be quicker at adapting to change. It may seem counterintuitive, but communicating during times of change, even when you don’t have any new information can go a long way towards helping people grapple with their natural emotional responses. Giving people a chance to raise their concerns in a way that legitimizes their anxiety creates a greater sense of trust and openness to working through the change.

Leaders who adopt the attitude of a learner, who are curious about how lives and work are being impacted, who genuinely care about how people are holding up will build support for change by simply being available and listening. As Eric Hoffer once wrote, “in times of change, the learners will inhabit the earth, because the knowers will find themselves beautifully equipped to deal with a world that no longer exists.”