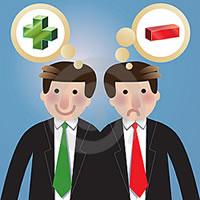 Russ believes in equal opportunity. He looks down on the greed, the disparities, and the selfishness that, he believes, presently dominate U.S. culture. The way Russ sees it, the individualistic view that’s caused all of the country’s current economic problems overshadows our ability as a society to create a system that takes care of all of its members equally and that abides by community standards. Individualism, Russ says, doesn’t allow us to work toward co-creating a quality of life that’s fair for every member of our society.

Cliff disagrees, calling Russ’ point of view robotic and socialist. Cliff believes in freedom. He believes individualism fosters the ingenuity, initiative, innovation, and diversity needed to create freedom. This freedom, he says, is what’s driven many American inventors and entrepreneurs to success for more than a century. Cliff says collectivism limits freedom through censorship, regulatory control, stagnation, and entitlements.

So who’s right: Russ or Cliff?

They both are, actually. Trouble is our culture tells us it’s either one or the other, but it can’t be both.

It actually can be both. Keep reading.

Using themselves as examples of polarization, Russ Gaskin of Green America and Cliff Kayser of Xperience opened their session, A “Speed Date” with Polarity Thinking, with this scenario at the 2011 Systems in Action conference in Seattle last week. They showed the audience how polarity—also known as either-or thinking—works.

When the values of individualism were overemphasized to the neglect of collectivism, for example, Russ would feel angry and threatened by greed, disparities, and selfishness. This would make Russ grow more fervent in his collectivist views to the detriment of his ability to objectively interpret and understand the positive aspects of Cliff’s argument for individualism, such as the way it aids an individual in taking the initiative and developing his or her unique talents.

The same would happen with Cliff.

If Cliff perceived that the values of collectivism were overemphasized to the neglect of individualistic values, he’d also feel angry and threatened by notions of socialism, censorship, individual limitations, and control. Like Russ, Cliff would also become more fervent in his beliefs if the perceived threat was heightened to the detriment of his ability to objectively interpret and understand the positive aspects of Russ’ view, such as genuinely working together to help all members of society thrive instead of a limited few.

What we need to do is stop latching on to one side and try to understand the values of both, according to Russ and Cliff. Learning to view the strength of both sides helps us shift away from either-or thinking toward a more inclusive world view—a world view known as both-and.

“Great leaders do both,” Cliff said during the session. “Every strength taken to an extreme becomes a weakness.”

Polarity thinking, both men said, gives systems thinking a theory, process, or tool that lets us tap into the thinking of each side in order to minimize the fear that each one may conjure up. Once we do that, we’ll be better aware of the interdependent conflicts between the values of each side so we can work toward linking both sides together.

For collectivist Russ, understanding how individualism fosters individual drive, uniqueness, and growth can help him understand and identify ways of using individualism to aid large groups of people. With this understanding, Russ can approach Cliff, for example, and ask him if a program can be developed where successful innovators can work together to help other members of society, like the middle class and the less fortunate. If Cliff accepts the disparities that individualism creates and learns to understand the greater needs of society as a whole, he can respond to Russ’ request by taking action and putting together a team of innovators who launch a project that aids these broader segments of society.

There are two truths to every polarity and neither one—on its own—is the whole truth.