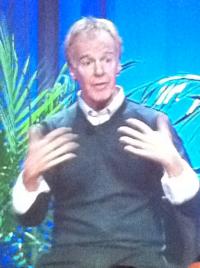 Our current patterns are placing a huge toll on our planet, which author Peter Senge called a “finite box” during Wednesday’s closing keynote address at the 2011 Systems Thinking in Action conference.

“We can’t keep putting things in a finite box with no control,” Senge told conference goers during a discussion on how systems thinking is finding its way into the world of business and what it means to sustainability—a theme that closely paralleled the topics Senge explored in his 2008 book, The Necessary Revolution: How Individuals and Organizations Are Working Together to Create a Sustainable World.

For many years, companies have focused on boosting value and profits for little to no concern about their impact on the systems they touch, according to Senge. What they didn’t realize is that “they can’t do it in isolation from those systems,” Senge said. “So rather than quote systems thinking as a methodology, what’s really happening in the world of business is people are waking up to the fact that they’re just not there to make money. And if they think they’re just there to make money, they probably won’t be.”

Senge continued: “Business is about making profit but that’s not it’s purpose—it’s a consequence and it’s a critical feature you need to have to stay in the game.”

Our current environmental problems, he said, stem from a traditional view that held that “the business of business is business. The private sector is private. All these big issues—food, water, the nature of our energy systems, waste, toxicity—those are public sector issues, therefore, they should remain with governments.”

Now all sorts of problems are cropping up around us and many companies are seeking to develop systemic solutions, Senge said. The “awareness” that was missing, Senge said, is beginning to show and is being corrected.

Senge cited Nike as an example. He harkened back to the mid-1990s when issues surrounding the poor conditions of its production plants in Asia surfaced. Nike, Senge said, didn’t feel accountable for the problem because they didn’t see their connection to it—the company didn’t produce or manufacture sneakers in those facilities; it’s contractors did. The company’s contracts with these facilities, however, made the issue a systemic problem that fell under the radar at Nike because Nike executives failed to see the interconnections at play.

The shortages our world currently faces are “literally around the corner,” Senge said. But we can curb them by developing the consciousness to limit or stop their exponential growth.

Senge asked the audience to consider what it would mean to lead in a “conscious way” before quoting Victorian author Oscar Wilde to describe what happens when we don’t: “‘For every complex problem there’s a simple solution… that’s usually wrong.'”

NOTE: This post was submitted from the 2011 Systems Thinking in Action conference hosted by Pegasus Communications in Seattle, Washington. Photo of Peter Senge courtesy of Aimee C. Juarez.