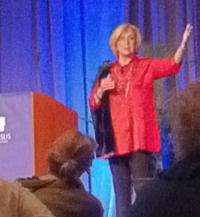 How we view the world around us is pretty darn interesting from the perspective of systems thinker Charlotte Roberts.

According to Roberts, our mental models shape the structures we create, the patterns that we spot, and the events that we choose to see or acknowledge.

It’s a hierachical evolution of perception—applicable to both individuals and organizations alike—that Roberts called “the four levels of reality” during her keynote address this morning to attendants of the 2011 Systems Thinking in Action conference in Seattle, Washington.

“Scope,” she said, “is dependant on your consciousness.”

Scope begins with our mental models, or what Roberts—an author and Saybrook University alum—described as “the pictures we have in our heads on how things should work.” These pictures determine the structures we create to support our mental model. Structures include our performance and the forces at play that we choose to acknowledge because they fit with our way of thinking. With these structures in place, we begin to identify patterns and categorize them as favorable or unfavorable based on our view. This same categorization happens as events—or the things we choose to see, according to Roberts—crop up.

Say a company driven to boost short-term revenues establishes a structure that’s focused more on curating a strong marketing and sales force rather than strengthening its research and design team. From this competitive viewpoint, company executives may spot patterns of fierce, market competition coming from rivals that may not be as real as they think. While company executives trap themselves in tunnel vision and busily craft a reactionary strategy, their rivals may actually be developing new products through investments in research and design. This can really hurt the company in the long run if its executives don’t stop and question the mental models at work.

When we understand what drives our thinking, we can work on expanding our consciousness, according to Roberts.

She defined consciousness as “a subjective state of perceiving and being aware of what’s going on inside and outside oneself so you can focus attention and intention.” If a company is driven by financials, much like the example I just offered, its scope is filtered through a fiscal lens—a lens that puts profitability far above other layers of consciousness offered by Roberts, including social, emotional, and environmental.

The narrower the focus, the narrower the odds for sustainable success, according to Roberts. A broader perspective—a perspective that incorporates other views or these layers of consciousness—creates a balance that’s necessary for true, sustainable success. Rather than consider itself driven by boosting short-term revenues, the company I offered as an example may consider developing its social consciousness by developing programs that build relationships with its customers, for example, who can tell them what’s right or what’s wrong about their products. It could also focus on developing its environmental consciousness by adopting “green” practices that benefit the broader community.

To curb the effect of assumption on our thinking, Roberts said we should always ask ourselves one important question: “What can I expose and expand?”

NOTE: This post was submitted from the 2011 Systems Thinking in Action conference hosted by Pegasus Communications in Seattle, Washington. Photo of Charlotte Roberts courtesy of Aimee C. Juarez.