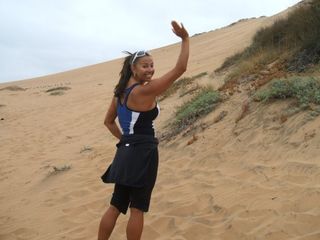 Andrea is a native of Chile who migrated to the United States in 1992. She worked for the Marine Corps as a Recreation Specialist for the past 14 years. Her experience includes Trauma Sensitive Yoga, tai chi, meditation, and martial arts. She has been featured in several publications including the National Journal, the U.S. Medicine – The Voice of Federal Medicine and FIGHT magazine for her work on PTSD and TBI. While at Marine Corps Base Camp Lejeune, she developed the first of its kind program for the Marine Corps Life Enhancing Activities Program (LEAP). This comprehensive program provided fitness, recreation, and other complementary and alternative modalities to Marines and sailors diagnosed with PTSD and/or TBI. Andrea also developed a partnership with Camp Lejeune Deployment Health to provide support activities to hundreds of Combat Stress and TBI patients including yoga, relaxation and breathing techniques, meditation and martial arts. She also provided fitness, recreational and leisure activities support to the Back on Track Program; a two-week program from the Naval Hospital that focuses on patients with PTSD, the Outpatient Crisis Prevention Program and the Warrior Recovery After Concussion Program.

Andrea has been a guest speaker to numerous conferences around the country on behalf of these programs including the 19th Annual Conference on Trauma presented by Dr. Bessel van der Kolk and The Justice Resource Institute (JRI); the Marine Corps Combat Operational Stress Control (COSC) Conference 2008; the Semper Fit, Marine Corps Community Services (MCCS) meeting for the Athletic Business Conference 2008; the University of North Carolina Social Workers Alumni Symposium on Complex Trauma in Adults and Children; the Yoga Training/Seminar conducted by The Trauma Center at JRI; t he Marine Corps Meeting at the National Institute on Recreation Inclusion, San Antonio, TX; the Yoga Training/Seminar at the Kripalu Center, MA, November, 2009.

After concluding her work as the Warrior Athlete Reconditioning Program Manager for the Marine Corps Wounded Warriors Detachment at Bethesda National Medical Center on September 31st, Andrea accepted a position with the National Intrepid Center of Excellence for the diagnosis, treatment, and research of PTSD and TBI. There she works as a recreational and exercise therapist and mind-body skills provider.